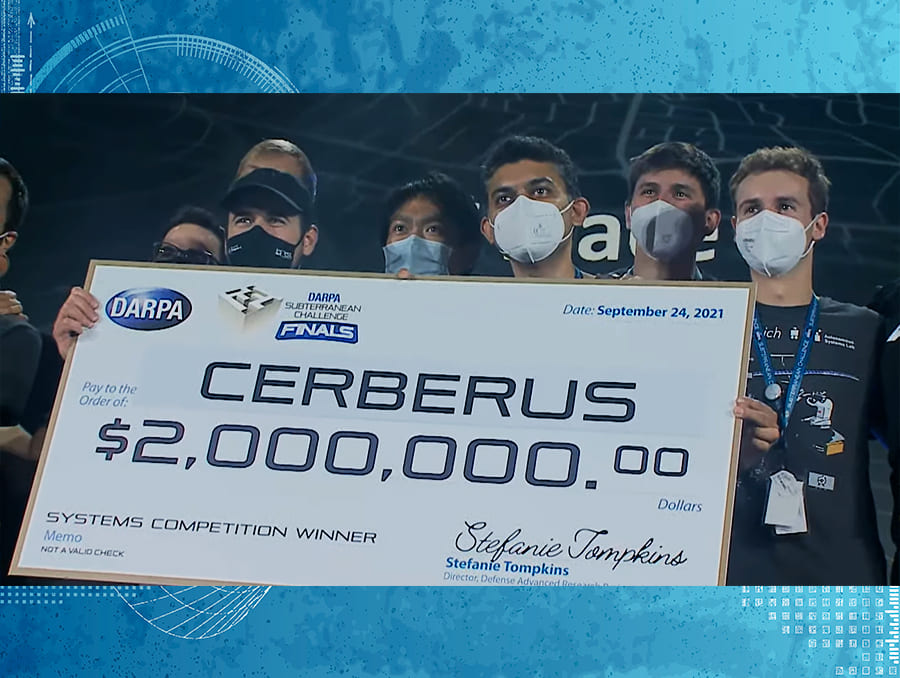 In the Final Event, held Sept. 24, DARPA designed an environment involving branches representing all three underground challenges of the “Tunnel Circuit”, the “Urban Circuit” and the “Cave Circuit”. Robots had to explore, search for objects or “artifacts” of interest, and report their accurate location within underground tunnels, infrastructure similar to a subway, and natural caves and paths with extremely confined geometries, tough terrain, and severe visual degradation – including dense smoke.

Team CERBERUS deployed a diverse set of robots with the prime systems being four ANYmal C legged systems. In the Prize Round of the Final Event, the team won the competition and scored 23 points by correctly detecting and localizing 23 of 40 of the artifacts DARPA had placed inside the environment. The second team, “CSIRO Data61” also scored 23 points but reported the last artifact with a slight further delay to DARPA thus the tiebraker was in favor of Team CERBERUS. The third team, “MARBLE” scored 18 points.

“On the world stage, Professor Alexis and his team took the top honors, pushing their vital research forward and, in the process, paving the way for a better future for us all. Their hard work and dedication are not only inspirational but indicative of the globally competitive engineering and computer science education offered in the College of Engineering and the success of one of the strategic research focus areas in the College, one we created and supported over 10 years ago.”

“This competition brought together the very best in the entire world,” College of Engineering Dean Manos Maragakis said. “On the world stage, Professor Alexis and his team took the top honors, pushing their vital research forward and, in the process, paving the way for a better future for us all. Their hard work and dedication are not only inspirational but indicative of the globally competitive engineering and computer science education offered in the College of Engineering and the success of one of the strategic research focus areas in the College, one we created and supported over 10 years ago.”

Maragakis added that, for years, the College of Engineering has built a team of dedicated faculty members and students to push robotics research forward through collaboration that extends beyond campus.

"The College of Engineering is focused on creating a robotics center by pulling together the talent of faculty and students from other engineering departments but also from other colleges," Maragakis said. "The success in this competition will be a major inspiration for the success of this effort." 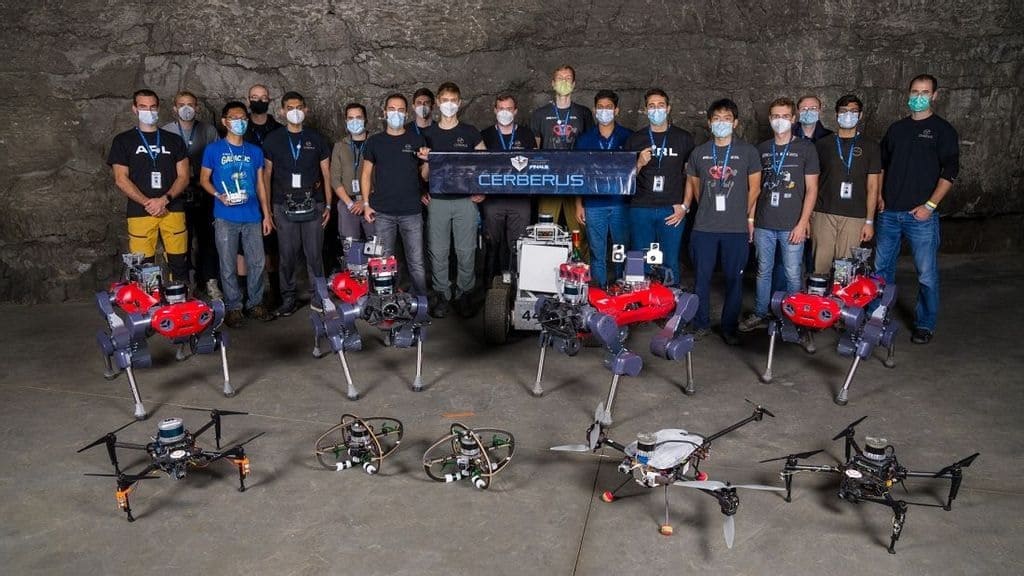 CERBERUS stands for “CollaborativE walking & flying RoBots for autonomous ExploRation in Underground Settings” and throughout the three years of the project developed a team of legged and aerial robots capable of autonomously exploring diverse subterranean environments such as underground mines and tunnels, metropolitan sub-surface infrastructure, and natural cave networks. After successfully going through the Tunnel Circuit and the Urban Circuit of the DARPA Subterranean Challenge, Team CERBERUS qualified for the Final Event (the “Cave Circuit” planned for early 2020 was canceled due to the Covid-19 pandemic).

Project CERBERUS started on Sept. 18, 2018 and successfully completed the three phases, receiving funding of up to $4.275 million and the opportunity to win an additional $2 million reward at the Final Event.

The seeds of success were planted in 2018 when Nevada's Governor's Office of Economic Development  asked the University to put forward the concept and implementation of a “Mine Inspection Robotics” project backed by $400,000 of GOED administered Knowledge Fund resources. The activities of this Knowledge Fund project allowed expansion of research into the broader area of subterranean robotics.

“This tremendous achievement is an excellent example of how the Knowledge Fund succeeds in leveraging state dollars with federal and other grant opportunities and puts Nevada’s research universities at the forefront of technology areas, such as robotics, most sought in a highly competitive 21st century global environment,” Karsten Heise, director of strategic programs at the Governor’s Office of Economic Development, said.

The DARPA Subterranean Challenge was one of the rare types of global robotic competition events pushing the frontiers for resilient autonomy and calling teams to develop novel and innovative solutions with the capacity to help critical sectors such as search and rescue personnel and the industry in domains such as mining and beyond. The level of achievement of Team CERBERUS is best understood by looking at all the competitors in the “Systems Competition” of the Final Event. The participating teams including members from top international institutions, namely:

"We congratulate all members of Team CERBERUS and we are proud of this incredible and historic achievement," Alexis said. "Most importantly, we are excited to be part of this amazing community pushing the frontier of resilient robotic autonomy in extreme environments."

"...[W]e are excited to be part of this amazing community pushing the frontier of resilient robotic autonomy in extreme environments."

Through this dedication to collaboration and hands-on mentorship, Alexis built a team strong enough to overcome long odds to win the DARPA SubTChallenge.

“I remember Kostas initially having reservations about even applying for the DARPA challenge given that he had to compete against teams from the best universities in the world that had better students and far more resources,” Department of Computer Science & Engineering Chair Eelke Folmer said. “He was able to attract and build an amazing team of students to help him compete.

“Kostas really stood out as a mentor, and he treated his students really well regardless of whether they were graduate students, undergraduate students or high school students interning in his lab over the summer. Kostas’ office was literally a desk in the middle of his lab, which allowed him to spend a lot of time with his students. Instead of his students working for him, he was there to help the students and, together, solve the hardest AI challenges. He made time for every student and cared deeply about them. His growing reputation in the robotics community helped him attract students from the best universities.”