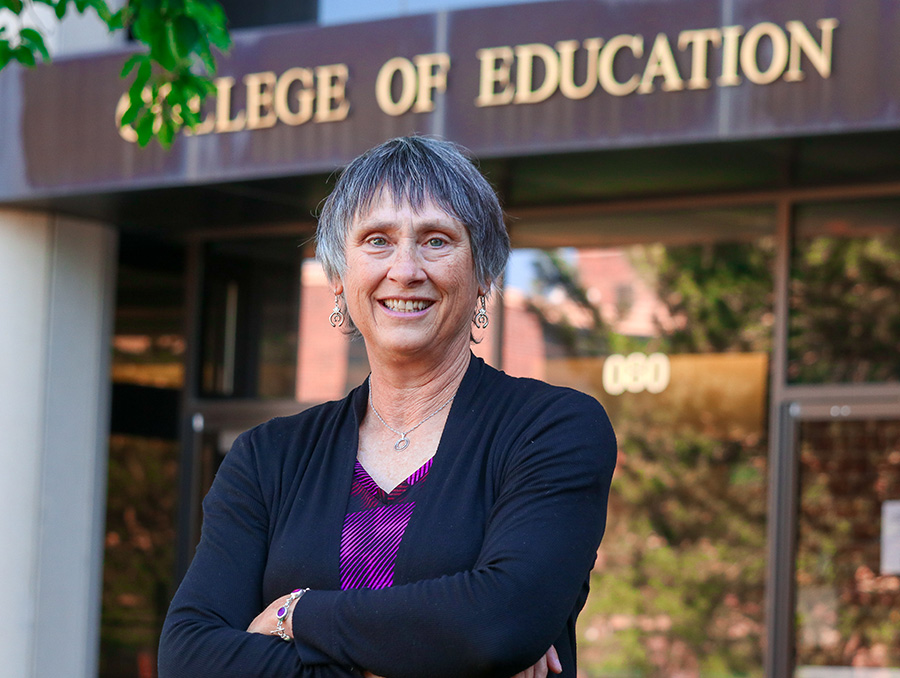 The Louise Hay Award for Mentoring is given to individuals who significantly advance the field of mathematics education. Through her contributions as a member of the advisory board of Women and Mathematics Education (WME), her research, conference presentations and decades of experience in community outreach that further gender equity in the field, Lynda Wiest, Professor of Mathematics Education and Educational Equity, has been given the prestigious award from the Association for Women in Mathematics (AWM) only a few months after receiving the unrelated but equally impressive Willystine Goodsell Award.

“It's been a little while since I won any awards and to win two national ones, major national ones in a single year, is something I'm extremely thankful for,” Wiest said. “It motivates me even more. In a year like we've had this year, there've been so many challenges for everybody that I think it’s an even nicer bonus this year.”

Wiest has been the director of a week-long math camp that has helped many young girls discover their passion for mathematics since 1998. Although the camp couldn’t operate this year because of COVID-19, working directly with students is something that Wiest enjoys and plans to continue throughout the rest of her career.

“I'm there the entire week and I'm popping in and out of the rooms all day long and participating in some of the evening recreation,” Wiest said. “I get to see the light bulbs going off, see them learning, see them coming out of their shell and learning to talk in the classroom and the safe setting that we create, and they're not afraid to engage with math and to talk about it.”

The camp will reopen in the future, operating within a co-ed model for all students who fall within the appropriate age group for the week-long camp.

“I'm still going to run a math and technology camp for Nevadans one week every summer,” Wiest said. “How that might evolve, I’m not sure, but we’re still going to continue doing that. There are other things we’ve talked about doing with our program, some things related to tutoring, some virtual or remote types of programs, so that we can reach more people.”

Wiest’s work extends beyond just community outreach. She also conducts and reports research, giving presentations and sharing information at conferences and in publications across the country; however, the community outreach sometimes returns in the form of a chance encounter with parents or former students, serving as a concrete reminder of the work she’s doing and how it directly impacts the local community.

“I was sitting in a coffee shop recently talking with a friend and someone came in that looked so familiar to me,” Wiest said. “I had to say something to her. I thought she went to my first camp ever. She was standing in line in scrubs. It turns out it was her and she is now a nurse, and she had attended the very first camp in 1998. It's truly gratifying work.”