Diversity in health care starts at the beginning 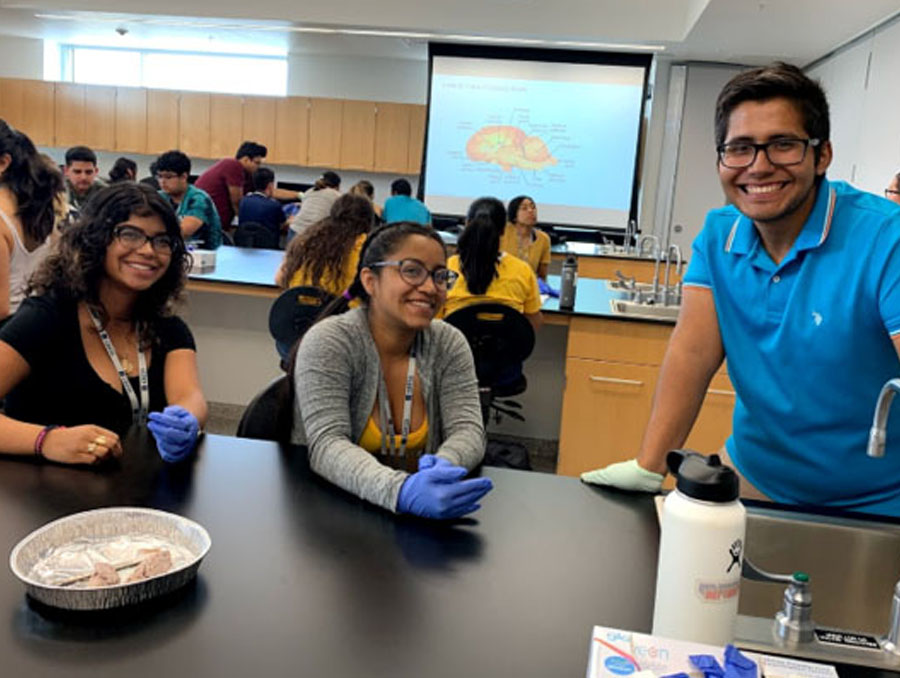 Diversity in health care starts at the beginning

Since 1968, National Hispanic Heritage Month has been recognized by the federal government and celebrated across the United States annually, from Sept. 15 to Oct. 15 to acknowledge the history, culture, and contributions of Americans whose ancestry can be traced to over 20 countries in Latin America, including Mexico, Central and South America, and the Caribbean. There are approximately 60 million people residing in the U.S. representing approximately 18% of the population, who have ancestries connected to these countries.

The University of Nevada, Reno School of Medicine (UNR Med) and University Health join in celebrating this annual commemoration as part of our commitment to diversity and inclusion and our ongoing efforts to increase the representation of Hispanics, and others from populations underrepresented in medicine, who serve our community as healthcare providers.

Diversity in health care benefits students and their future patients.

UNR Med is making great strides in training a broader spectrum of future physicians, capable of relating to patients and speaking their language, both literally and figuratively.

For second-year UNR Med medical student Sergio Trejo, being Hispanic and a Spanish speaker has been an enormous asset in understanding cultural subtleties and prominent social health determinants. “I volunteer as an interpreter and student provider for clinics that serve underserved communities and interact with English language-challenged patients in navigating the health care field. When patients are able to precisely describe what brings them into the clinic in their own language with a health care professional who understands them, they’re overcome with a sense of relief and gratefulness. This is my motivation for dedicating my career to serving underserved populations, especially those who face massive language barriers.”

The Association of American Medical Colleges (AAMC) reports that Hispanic matriculation to U.S. medical schools was 6.2% for the 2018-19 academic year. At UNR Med, the number of enrolled Hispanic medical students has more than doubled since 2011, reaching 20% for the 2020-21 academic year. In addition, more than half of the UNR Med Class of 2024 medical students represent UNR Med Mission-Based Diversity Groups, reflecting Nevada’s diverse population. During this same period of time, the size of our application pool continued to grow and the average academic credentials of incoming students remained consistent or improved.

“Commitment to diversity starts with engaging in outreach that exposes young people from groups underrepresented in medicine to role models and that inspires them to pursue a career in healthcare,” said Tamara Martinez-Anderson, director of admissions. “It is also reflected in a holistic admissions process that requires academic and professional readiness for medical school, but also considers how each candidate’s diverse competencies, attributes and backgrounds align with our mission and values. We know that achieving our vision of a healthy Nevada benefits when we enroll future doctors who are collaborative, resilient and adaptable and who are committed to providing compassionate, sensitive and culturally competent care.”

UNR Med’s total enrollment of Hispanic students is around 54 students, including the School of Medicine, Physician Assistant Studies Program and Speech Pathology and Audiology student bodies. Over the past four years, UNR Med has nearly tripled Latinx and Black faculty representation.

Pre-med pipeline programs and initiatives have been shown to help underrepresented students better prepare for the medical school admissions process. Developing and expanding these avenues of educational support continue to be a strong priority for UNR Med’s Office of Admissions.

The mission of the Community of Bilingual English-Spanish Speaker Exploring Issues in Science and Health (CBESS) program is to create opportunities to position bilingual high school students as insiders into STEM-healthcare fields. CBESS aims to increase diversity in the health care workforce by providing programming for Spanish-English bilingual high school juniors through networking events with health care professionals, medical school tours, and a variety of other activities. The initiative is collaboration between the University’s College of Education, Raggio Research Center, School of Community Health Sciences and School of Medicine.

Sergio Trejo became involved with CBESS, and his experience as a student in the program led him to choose UNR Med for medical school. “I’ve always been interested serving underserved communities, especially those who face prominent language barriers. I decided to attend UNR Med because Tamara Martinez-Anderson and other faculty demonstrated how UNR Med has similar goals in striving to alleviate health disparities for Nevada's underserved populations and beyond.”

In support of first-generation and low-income undergraduate students who are preparing for the medical school application process, the Office of Admissions has partnered with the University of Nevada, Reno TRiO Scholars Program to offer pre-med advising and learning support. Also available is a one-year Post-Baccalaureate Certificate that provides a small and select group of students, frequently from non-traditional or underrepresented backgrounds, with the opportunity to demonstrate their academic readiness in a pipeline program that mimics the intensity of medical school.

Another pipeline program involves early interventions to make reaching the goal of medical school more sustainable over the long term. The BS-MD Program grants exceptional high school students conditional direct-entry admission to UNR Med upon completion of all requirements of a structured, four-year undergraduate pre-med program at the University of Nevada, Reno.

As a first-generation medical student, Leanne Perez’s dream of becoming a physician felt discouraging at first, so the BS-MD program was key to guiding her throughout her undergraduate degree all the way to medical school. “I am honored to represent the Hispanic community, as it is so important for minority populations to identify with their physicians. Coming from an underrepresented community, I am so proud to attend a medical school that prioritizes diversity and outreach.”

“Our commitment to diversity is a pledge to seeing that all members of our community are able to access the quality health care they need,” said UNR Med Dean, Thomas L. Schwenk, M.D. “In northern Nevada, we not only have great health care infrastructure but a School of Medicine that is actively partnering with our health care community to build relationships and increase access to, and equity in health care for all.”

UNR Med’s success in recruiting, enrolling and graduating increasing Hispanic medical students is reflective of the broader University of Nevada, Reno goal to become a Hispanic-Serving Institution, with Hispanic students making up at least 25% of the undergraduate, full-time student population.