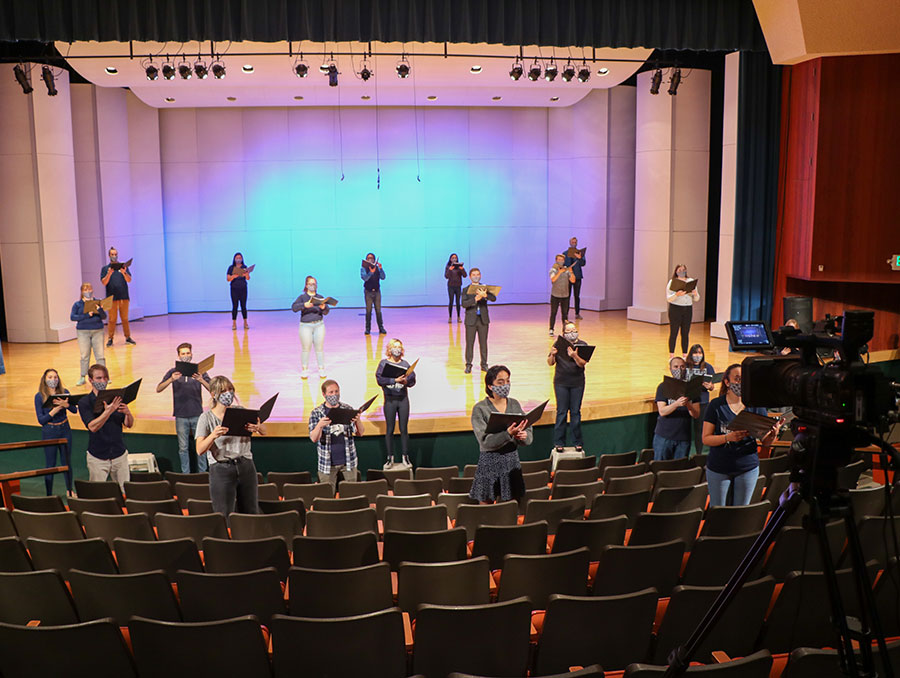 Helping to keep tradition alive, the Department of Music and School of the Arts in the College of Liberal Arts have been rehearsing, practicing and recording traditional commencement music to provide University of Nevada, Reno students with the best virtual graduation possible.

The virtual ceremonies will begin live-streaming on Dec. 5 at 10 a.m. for Spring 2020 graduates and at 1 p.m. for Winter 2020 graduates. Although most of the messages and arrangements are pre-recorded, it all was recorded specifically for the 2020 graduating class. The live-stream broadcast will give the ceremonies as much of a live-feel as possible given the circumstances around the coronavirus pandemic.

For the 2020 commencement ceremonies, the Department of Music offered the talents of Associate Professor of Voice and the Director of Nevada Chamber Opera Albert Lee who recorded the National Anthem. The University’s choir, directed by Paul Torkelson, offered up its talent to record the University’s Alma Mater, and the University’s brass ensemble, the Sierra Brass Quintet led by Trumpet Lecturer Jonathan Bhatia, recorded the processional and recessional for the ceremonies.

Following strict COVID-19 guidelines, recording these performances live was no simple feat. The brass quintet and the choir all wore masks while performing, maintained more than 10 feet of social distancing and only rehearsed in 30-minute increments. In addition, the brass instruments all were equipped with bell covers to minimize spray, and only the essential technical team members were present for production.

Despite the countless hours that went in to rehearsing, practicing, performing and producing, all of those involved in the music department agree that the experience was fantastic because it was the first time they were able to perform live together since the spring.

“The recording process was honestly a joy,” Lee said. “It’s the closest I’ve been to live singing in eight months. It was only the recording engineer, two videographers and a director, but it felt like an audience to me.”

The choir and brass ensemble agreed. Performing on stage to a mostly empty hall despite the production staff, still provided some sense of normalcy. Although the energy that a live audience casts to performers was definitely absent, being able to perform on stage was a delight.

“It’s a great chance for us to actually sing together,” Torkelson said. “It makes the students feel like they’re accomplishing something, rather than just dealing with the theoretical.”

Usually, the Wolf Pack Quartet is made up of faculty who sing the University’s Alma Mater for Commencement because the student choir has already returned home after the semester ends. The silver-lining this year was that the students were able to perform because the recording was done weeks in advance of the ceremonies.

“From what I can see, the University has gone to great lengths to do everything they can to include as many elements as they could into this virtual commencement ceremony that would be in the live one,” Bhatia said. “The University could have easily used a recorded performance of a random brass quintet; however, by highlighting our faculty in this performance, the students can leave us with a sense of pride and ownership over the institution they are now alumni of.”

For Lee, this experience was about sharing his talent with the University community. He feels passionate about providing students with an opportunity to see faculty do what they do best on campus and in the spaces they would normally have occupied. Lee made a point to articulate that although the performance is technically pre-recorded, it was done specifically for the class of 2020, in the world-class Nightingale Recital Hall and Hall Recital Hall, and will be shared in a live setting.

No details were spared by the technician team from University Libraries, which included multimedia production specialists Michelle Rebaleati, Maryan Tooker, Kyle Weerheim and School of the Arts Technical Director of Concert Halls Rich Norris. Equipment set-up, sound checks, videography, lighting and post-production were all handled as they would have been for a live ceremony.

The virtual ceremonies may not have the same pomp and circumstance feeling as they would normally; however, the traditional Pomp and Circumstance March No. 1 in D by Edward Elgar, arranged by Bhatia, will be performed for the ceremonies. The National Anthem and the Alma Mater will be sung before and after reading the names of the graduating class. The ceremonies will end with G.F. Handel’s “Alla Hornpipe” from Water Music Suite No. 1 in F played by the brass quintet for the traditional recessional.

“I’m just happy that we could all find a way to let people know that the traditions at the University of Nevada, Reno will continue,” Torkelson said. “That’s when people look to these smaller traditions like the Alma Mater to feel like they still belong to something that works in spite of all the craziness around us.”