TEDxUniversityofNevada dazzles the community with another noteworthy event

More than 1,600 attendees participated in a day filled with big ideas worth spreading 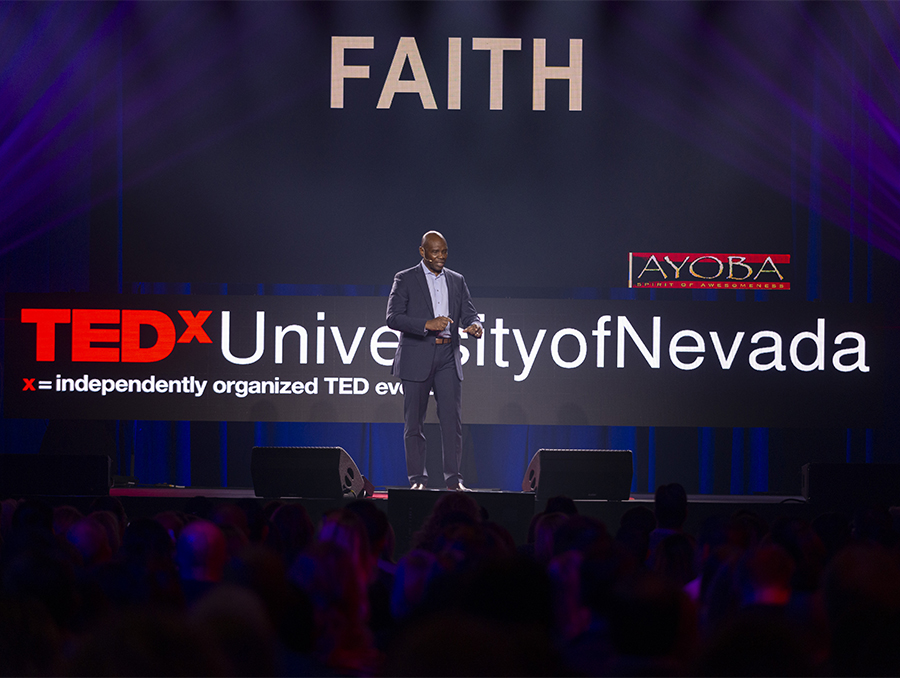 TEDxUniversityofNevada dazzles the community with another noteworthy event

More than 1,600 attendees participated in a day filled with big ideas worth spreading

The day began with opening remarks from University President Marc Johnson and Reno Mayor Hillary Schieve. Both recognized the significance of bringing the University out into the community with this well-attended community event.

“The best volunteer army in town.”

Under the leadership of Bret Simmons, TEDx event curator and University of Nevada, Reno College of Business associate professor, a number of local businesses and organizations partnered to ensure the event’s success. This year, 40 community partners helped make the event a huge success.

“This truly is a University/community collaboration,” Simmons said. “We couldn’t do this event without support from our sponsors. The support we receive out in the community drives us to deliver a quality event each year. I’m so grateful to all of our sponsors as well as the dozens of volunteers who help raise the bar on this event year after year.”

Patrick Lencioni, founder and president of The Table Group, kicked off the event with his talk on how to be the ideal team player. Robin Brockelsby, co-owner of Creative Coverings National Linen Rentals and Sales took the stage with her talk about living authentically and successfully with Multiple Sclerosis. Next was Jen Robinson who shattered many of the audience’s preconceived notions about the sex trafficking industry. Following was Michael Bungay Stanier, a bestselling author who had the audience in stitches over his talk on how to stay curious longer and silence your advice monster. Lastly was a musical performance by Afsaneh and NAHTE, two 17-year-old independent musicians.

Brigadier General Ondra L. Berry, a board member of No Opportunity Wasted, kicked off the second session with his exciting talk on unleashing your inner potential. Marilyn York, sole owner of an exclusive family law office known as Attorney Marilyn D. York, Inc., captivated the audience with her talk on men’s rights in divorce court and the importance of fathers. Caitlyn Collins, author of “Making Motherhood Work: How Women Manage Careers and Caregiving,” gave a talk discussing the parental leave crisis in the United States.

Kjerstin Gruys, assistant professor of sociology at the University of Nevada, Reno gave a captivating speech that explored the relationship between physical appearance and social inequality. Next up was Keith Payne a professor of psychology and neuroscience at the University of North Carolina, Chapel Hill who discussed the behavioral effects of social inequalities. Then Auburn Harrison, who started her career in the U.S. Navy at age 19, gave an insightful talk that sheds light on postpartum depression. Following this session was a musical performance by Mackenzie Nicole, a singer, songwriter and producer.

To kick off the third and final session, the audience heard from Karin Hilgersom, president of Truckee Meadows Community College who discussed ageism in the workforce and how age should not be a barrier to productivity. Emily Hand, assistant professor in computer science and engineering at the University of Nevada, Reno gave an exciting talk on the battle between artificial intelligence and humans and how AI leaves us with more time to be creative. Following was Leah Ochs, a STEM professional and pilot working in the aviation and aerospace industry as a manufacturing engineer who discussed women in the aviation industry. Sarah Porter, principal and owner of Porter House Marketing excited the audience with her talk on why people say they will never do anything. Jonah Yoelin, University of Nevada, Reno student and winner of “The Road to TEDx” student speaker competition, gave a talk on living in the moment and embracing unpredictability. Next was Kathryn Lukas, former chef and founder of Farmhouse Culture who gave a talk on the benefits of fermentation. Then Pat Heist, co-founder of Ferm Solutions, Inc., gave a riveting talk on how climate change effects the whiskey industry. Last, but not least, was Bengt Washburn who had the audience roaring with laughter during his stand up performance at the end of the segment.

The lobby exhibits were a hit with TEDxUniversityofNevada attendees this years. Presenting sponsors showcased their organizations with free giveaways, information and interactive experiences. Renown’s Healthy Nevada Project was also on site, and had more than 100 people participate by contributing DNA samples. The Nevada Wolf Shop sold books and CDs from speakers and performers.

TEDxUniversityofNevada concluded the event with a hosted after-party with food provided by Whole Foods Market and beverages by Bently Heritage Estate.

TEDx events are locally organized programs aimed at sharing short talks focused on one "big idea worth spreading." The format helps communities, organizations and individuals spark international dialogue through videos of the talks and performances, which will be posted to the official TEDx YouTube site, TEDxTalks, in the coming days.