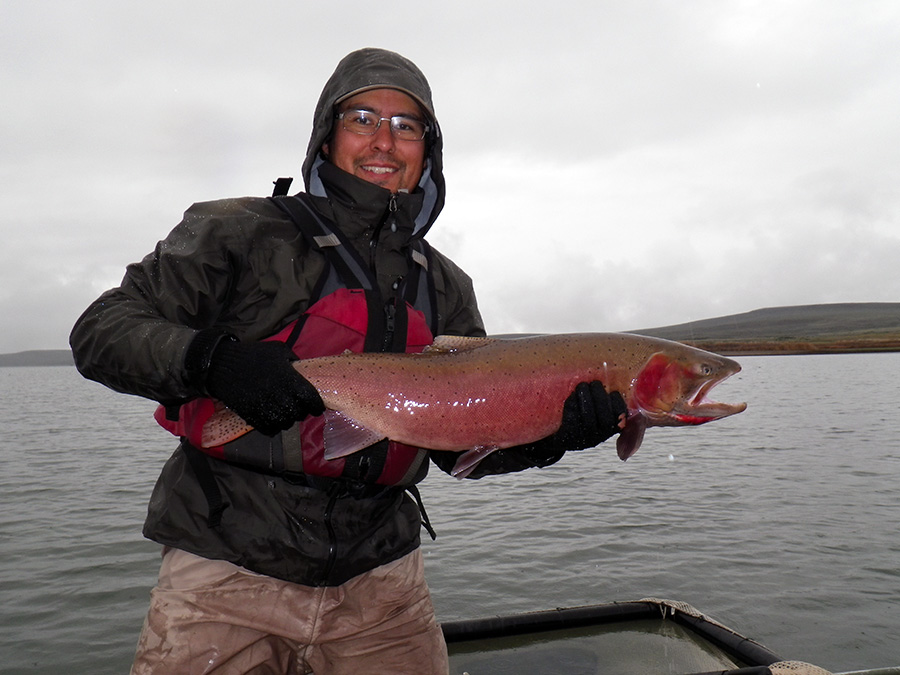 Summit Lake in remote northwest Nevada is home to the only self-sustaining, robust, lake population of Lahontan Cutthroat Trout, North America’s largest freshwater native trout species. Research to understand the reasons why this population continues to thrive, where others have not, will be used to protect the fish and its habitat – as well as to apply the knowledge to help restore other Nevada lakes that once had bountiful numbers of the iconic fish that historically reached 60 pounds.

A team of researchers from the University of Nevada, Reno and the Summit Lake Paiute Tribe has been studying the watershed ecosystem and recently authored two papers published in scientific journals describing their findings about the relatively small desert terminal lake.

This project is part of a 9-year collaboration to conserve habitats and promote a healthy ecosystem for the lake. University researchers Sudeep Chandra and Zeb Hogan – as well as students from their aquatics ecosystems lab and Global Water Center – work with the tribe’s Natural Resources Department, formerly led by fish biologist William Cowan before he retired from the U.S. Fish and Wildlife Service.

“An objective to implement holistic management at Summit Lake is to blend science with traditional knowledge to protect and conserve natural ecologic processes, species diversity and tribal cultural practices,” Cowan said. “The partnership with the Global Water Center, as well as many other researchers, agencies, and organizations has complemented this objective by implementing science-based research and technological advances to investigate the viability of trout in the Summit Lake watershed.”

Monitoring data, including climate, hydrology, fish and wildlife population trends and habitat integrity, is used to develop, revise or validate the tribe’s management plans and regulations. This approach is a stark contrast to when the lake ecosystem and associated resources were at risk of irreversible impacts caused by non-point source pollution, irrigation diversions, livestock grazing, and the unknown affects caused by exporting trout eggs for establishment or supplementation of other populations.

“Our team at the University wants to support the efforts initiated by the Summit Lake Tribe," Chandra said. “Our goals are to assist them in developing their science-based program to protect Nevada's only strong, self sustaining lake population of Lahontan Cutthroat Trout. We believe that investigations in this robust ecosystem like Summit, where there is little human impact, could improve recovery efforts in other lake systems that are less fortunate and that have lost their trout like the Walker and Tahoe. Surprisingly there are still few comparative investigations of these lake ecosystems and how they could support trout during a time for increasing global changes.”

The Lahontan Cutthroat Trout, with its crimson red-orange slash marks on the throat under the jaw and black spots scattered over steel gray to olive green scales, is Nevada's state fish and holds a cultural significance to the Summit Lake Paiute Tribe while providing the tribe with bountiful food and fish resources.

As an important traditional food source, Lahontan Cutthroat Trout composed a large part of Tribal member’s diets and were the focus of many gatherings held to honor the fish and to learn oral history, traditional practices, and cultural resources from elders of the tribe.

“The tribe has exercised their sovereignty to protect, manage and enhance tribal homelands, including the lake ecosystem and associated resources by working with federal agencies and other organizations that enable the tribe to holistically manage and protect the land, water and resources that fish, wildlife and tribal members depend on for survival,” Cowan said.

The lake is about one square mile of surface area, has a mean depth of 20 feet with the southern end generally deeper with about 50 feet of depth at the deepest. The lake elevation decreased about 13 feet during the severe drought in the western United States that lasted from 2012 to 2016.

“One thing we learned is that the climatically induced drought can change the hydrology, or flow of water and connections of stream to lake, but even with these changes, the trout populations remain relatively stable in the lake,” Chandra said. “They look for the opportunity to spawn every year and likely wait for better conditions with higher flows for better access to upstream spawning grounds.

“So it is critical to support the tribe’s efforts to protect the watershed and understand how the long term changes in water resources, like the flow of water, will change with pending climate change projections for the Great Basin.”

James Simmons, doctoral student with the Ecology, Evolution and Conservation Biology program at the University said the population appears resilient to today's climate disturbances/drought, which is very positive, but should the frequency and severity of drought increase in the future, will the population remain resilient in the face of continued low abundance, survival, spawners and a skewed sex ratio.

“I think the key going forward will be for the tribe to try to understand how the long-term flow of water in the watershed will be impacted by the future changing climate in the Great Basin - so that the tribe can formulate a game plan to get ahead of any potential negative repercussions,” he said. “Like cutthroat populations across the western U.S., this population faces unknown impacts from climate change.

“Declining abundance and diverging male and female abundance under changing drought cycles and conditions may have negative long term consequences. The prediction of increased frequency, severity and duration of drought and an increased percentage of rain may decrease abundance, reduce the effective population size and skew the sex ratio at Summit Lake.”

The research team found that connections between the upper watershed and the lake are essential for maintaining a healthy population during a drought. During the drought of 2012-2016, Summit Lake had a strong, stable population of naturally reproducing Lahontan Cutthroat Trout. The numbers of trout spawning up Mahogany Creek, one of the lake’s only inflow streams, was also relatively stable in number. Some of the trout in the lake migrated all the way to the upper watershed, about eight miles.

“Lahontan Cutthroat Trout can live in streams and lakes,” Chandra said. “The trout that live in lakes need rivers to spawn to keep their populations healthy. The numbers do show with little to no major changes to the watershed by human development, there is still a highly variable amount of spawning from lake to stream.”

Adequate stream flow is necessary for spawning and movement to the lake-dwelling component of the population. In rivers where flow is regulated, enough flow must be preserved in the spring to allow “lake spawners” to come upstream and in the fall to allow juveniles to migrate to the lake.

“Healthy habitat and ecological connectivity between habitats, such as no man-made migration barriers and adequate stream flow, should be preserved throughout as much of the watershed as possible (and of course between the stream and the lake) to facilitate movement for both stream- and lake-dwelling fish, and to support a robust overall population,” Teresa Campbell, a biologist and staff researcher in the University’s Global Water Center and lead author of one of the scientific papers, said.

“Strong connectivity between healthy stream and lake habitats is crucially important to the long-term survival of the Summit Lake Lahontan Cutthroat Trout because it seems that the exchange of individual fish across habitats contributes to the resilience and vitality of the population as a whole.”

The study also found that in drought-prone systems, streams should have adequate pool habitat and cover such as trees and woody debris to provide a refuge area from the drought and cooler temperatures for trout.

“During the drought, in the stream, these refuge pools with structure in the form of wood, cobbles, or boulders supported higher densities of stream-dwelling trout,” Campbell said. “Therefore, this habitat type is an important component of healthy stream habitat for trout.”

“The lake and surface water on the Reservation are further protected by restricting public access and monitoring resources necessary to sustain endemic species diversity in the area,” Cowan said.

The Summit Lake Paiute Tribe Reservation is the most remote Native American reservation in Nevada. Located in the northwest corner of Nevada, the reservation is 50 miles south of the Oregon border and 70 miles east of the California border.

The two scientific papers describing the findings of the research are: “Population dynamics of threatened Lahontan cutthroat trout in Summit Lake, Nevada” in Nature publication’s Scientific Reports with James Simmons of the University of Nevada, Reno as lead author; and “Population connectivity of adfluvial and stream-resident Lahontan cutthroat trout: implications for resilience, management, and restoration” with Campbell as lead author. Co-authors include, from the University, Hogan, Chandra and Kevin Shoemaker; from the Summit Lake Tribe, Cowan and Jessica Saenz; and from the University of Santa Barbara, Christopher Jerde.