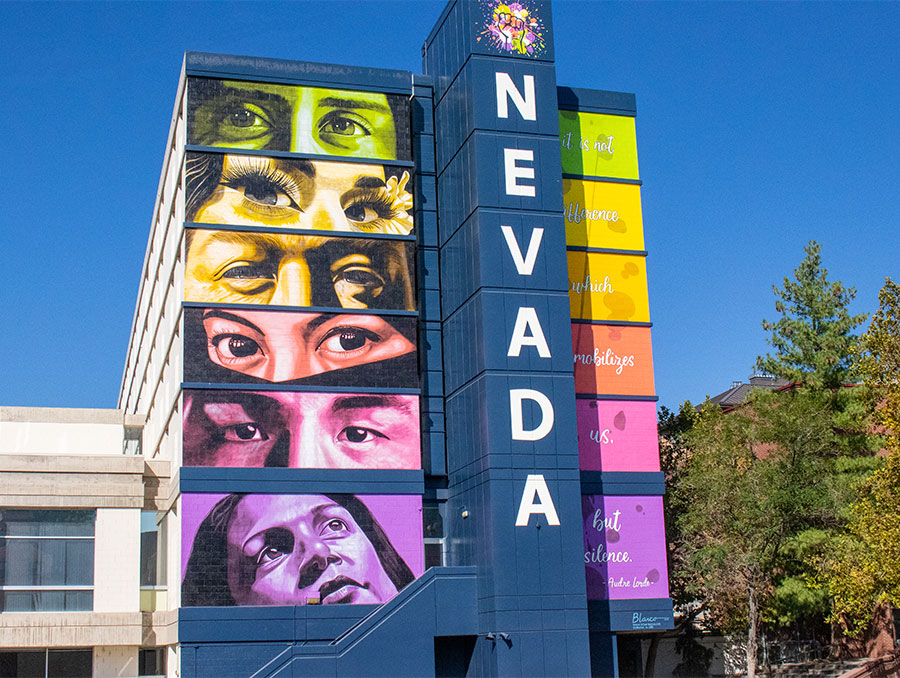 The Sierra Hall mural on the University of Nevada, Reno campus was completed in July and is already sparking conversation and evoking emotions as students and faculty return to campus. Artist and MFA alumnus Rafael Blanco spent long and arduous hours this summer, up in the sky painting the most important piece of public art (according to him) in just three short weeks. Originally, Blanco was slated to paint two murals on the University campus – one on the Sierra Hall building and the other on the Ansari Business building. Instead, he created the Sierra Hall mural as planned and instantaneously painted a different mural outside the atrium of the Church Fine Arts building as a dedication to the School of the Arts.

The Sierra Hall mural will be getting a dedication of its own. An event was previously announced for Sept. 25, which will be rescheduled for another time this this fall.

“As an artist interested in creating impactful art accessible to everyone, it was the first time I was able to create something conceptually meaningful on a very visible, large-scale wall where I had the freedom to paint my own idea,” Blanco said.

The mural spans seven stories on the east side of the Sierra Hall building facing Virginia Street. On the left side of the mural, six sets of human eyes are painted horizontally representing different races, ages, ethnicities and sexual orientation. The eyes of Colin Kaepernick are represented at the top. Vivid colors of green, yellow, orange, red, pink and purple also appear horizontally meeting up to a brick column-like structure down the center of the mural. On this center column, Blanco painted his own version of a clenched fist that is a symbol of resistance and defiance against social and racial injustices. Paint splatter appears at the top of the column around the fist with “Nevada” painted vertically down the column, painted with Reno Paint Mart’s official “UNR Blue” color. To the right of this, continues the colorful horizontal stripes with a quote by Audre Lorde that reads, “It is not difference which immobilizes us, but silence.”

Blanco was approached by the University to paint two murals on campus that promote diversity, equity and inclusion. The idea for the mural was conceived two years ago by students who argued that the campus lacked representations of diverse identities. As Blanco worked on the mural, students were involved in discussions about its execution, including what its message should be and what quote should be used to represent that message. As an alumnus, he was excited to travel back to Reno from Chicago to paint this public piece for the students.

“This painting will celebrate diversity of race, culture, gender, religion, sexual orientation, age, etc. for many, but it will bring questions and controversy to many others,” Blanco said.

After 10 trips to Reno Paint Mart for many gallons of paint, spending 12-14-hour days painting and working with the challenges of the elements, Blanco feels the Sierra Hall mural is a call to action.

“We all know what racism means, but we actually understand it very different from each other,” he said. “This visual statement will be seen in different ways, but it is the beginning of a response and effect to what has been happening on campus during the past years.”

Blanco said this was no ordinary mural, and he is no ordinary artist. He credits his “team” who supported him through the entire process, including working with the City of Reno to shut down Virginia Street at times to move a boom lift from Ahern Rentals.

"The team – and everyone who has supported the project at the University, as well as the City of Reno – created an artwork, a statement, a response to the uncertainties of the present; in my opinion, this is the power of art,” Blanco said.