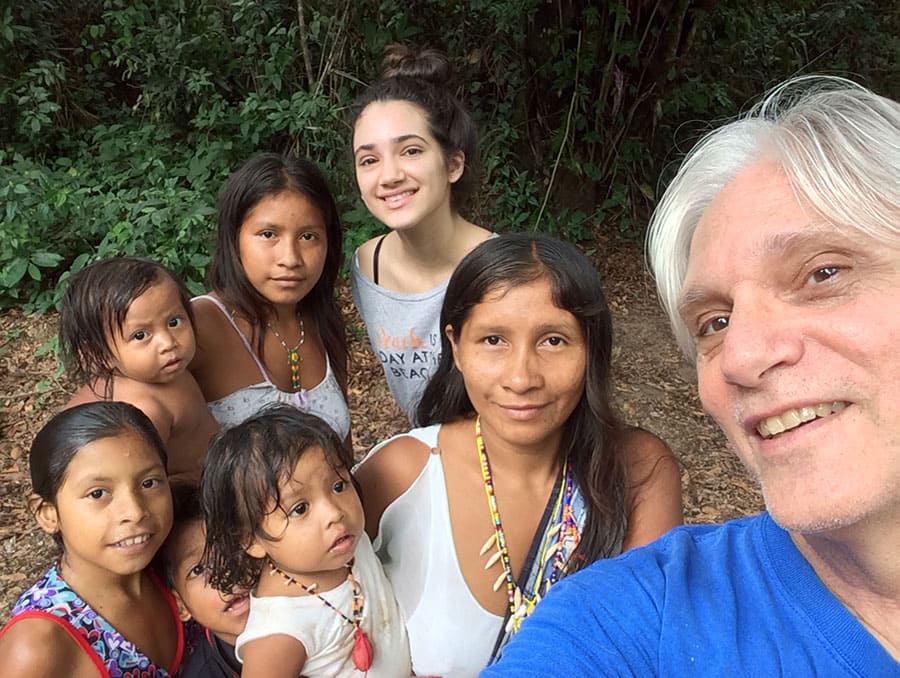 There are over a 100 indigenous communities in the Brazilian Amazon with little or no contact with mainstream society. The Awá community is one of them. Associate Professor of Anthropology for the College of Liberal Arts, Louis Forline, who has worked with them since 1990, is engaged in examining their societal changes as they adapt to the impacts of modernization. He recently returned from a four-month Fulbright fellowship in Brazil where he lived and learned with the Awá people.

Self-proclaimed as an eclectic interdisciplinary anthropologist, Forline’s research in the area of indigenous knowledge of natural resources has helped him work with Amazonian communities for the last 30 years. Not only has he learned to speak their native language of the Tupi-Guarani family, but he has worked with the people, engaged with them, lived with and co-published with them all the while researching and documenting their culture.

In the past, Forline described how these indigenous communities grew wary of anthropologists. Many researchers would come on to their land just to document their culture and leave, without providing any real benefit to the communities. Forline is there to act as a voice for the people. “It’s a combination of being a lawyer, social worker and a good anthropologist. You can’t be the White defender – they have to rise up and articulate their needs by themselves, and we try to provide them with a platform through which they speak,” Forline said.

Forline’s strategy to learn about these communities started by working with the children. He described playing with the kids during the day while the parents are working out in the field planting crops or hunting. Through participant observation, he became enculturated with the Awá community. “You have to have a lot of humility. You learn to pick up a broom when needed and engage in their daily chores,” Forline said.

Part of Forline’s research is identifying the causes and consequences of five different indigenous Amazon communities coming into contact with mainstream society. Forline said he has seen the effects of history repeating itself with early colonizers coming over from Europe and overwhelming Native people with the introduction of diseases, military campaigns, missions, etc. “They got scattered and fragmented; a lot of them succumbed to malaria and influenza, and they slowly rebuilt themselves through different governmental policies and NGO involvement,” Forline said.

In fact, Forline said one Amazon community decreased from 90 members to just 25 in the late 1970s because of the introduction to new diseases and infections. He said the problem in the Amazon currently is that the Brazilian government believes the indigenous people to be in the way of development. They want to take over the land occupied by native communities.

Forline spent his last tour in the Amazon primarily doing ethno-mapping – looking at how different ethnic groups imagine and perceive their land areas. He was conducting ethno-mapping from the Awá’s perspective and trying to identify who gets the final say in the naming of certain geographical areas.

In addition, Forline is helping to establish a conservation area in the Amazon. He said many native reservations will come together in one block, so he is assisting to lobby Brazil to officially establish the land unit as a mosaic of Indian Reservations and Conservation areas. “This is the place of traditional homeland – it has symbolic meaning, cosmologic meaning,” Forline said. If lobbying efforts are successful, it will provide the local communities with added security and help with ecological protection, restoration and cultural revitalization.

Mining companies have vastly changed the landscape in Brazil. One mining project, Carajás, has impacted 40 indigenous communities with trains operating round-the-clock, sending game animals fleeing and drastically reducing other natural resources. And Brazil’s heavy export economy is doing well in the international arena and has no plans of moving these mining companies out any time soon. Forline plans to expand his research efforts to examine how the forces of globalization are impacting these communities through this production chain. “Decisions in corporate headquarters and Wall Street ripple far away to the far corners of the Amazon,” Forline said.

Yet, despite all the Awá people have suffered, Forline said he is still amazed at how they rebounded and are very forgiving and accepting people. He is also in awe at how quickly they learn and adapt to new technology. “They were teaching me how to use my own iPhone! They told me ‘Louis don’t send a text, just record an audio message.’”

The younger generations are adapting to a fast-changing world more than their elders and this has consequences for, as Forline described, it’s a blessing and a curse to modernize. He and others have been able to help introduce these communities to things like western medicine and other accoutrements, but with that comes added responsibility. They need legal representation to help preserve their culture.

“Yesterday’s indigenous person is today’s peasant in these developing nations with the forced assimilation they are undergoing.” Forline said it’s important to anticipate all the changes happening from climate change, unbridled development, to environmental disasters. Then Forline and others can continue to collaborate with the Awá and other indigenous communities of the Amazon to deal with real present-day issues, while still preserving their heritage.