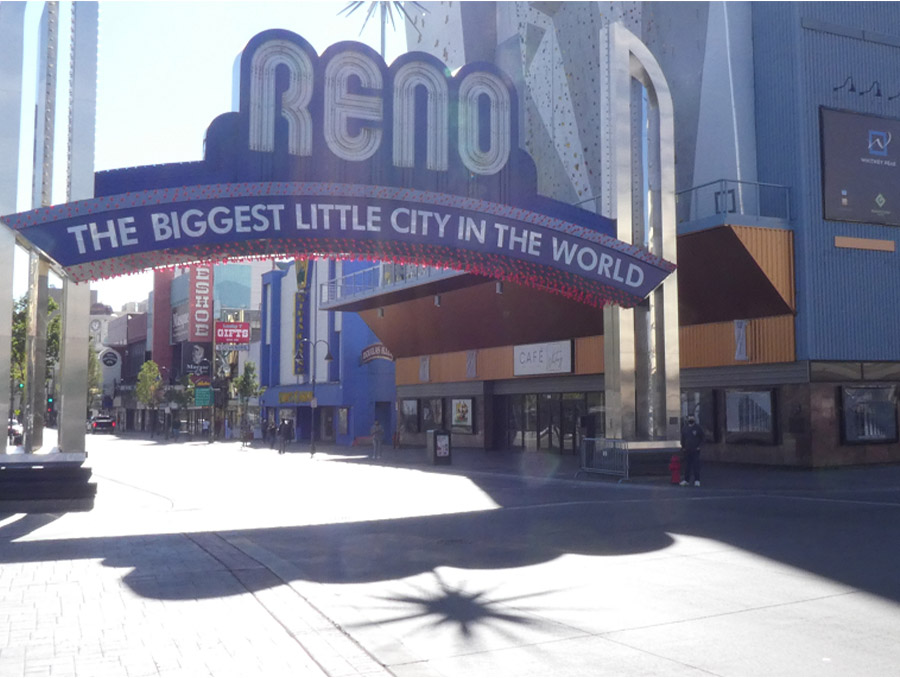 One of the aspects of life hardest hit by COVID-19 prevention efforts has been the limitation and cancellation of community events, including those traditionally held by the University of Nevada.  The photographs presented in this post demonstrate the stark difference between the streets of downtown Reno with throngs of people near the old Reno arch celebrating the University of Nevada's Homecoming Parade in 1959 and the current Reno arch, from where the March From the Arch for Homecoming Week normally embarks.

The March will likely not take place this year due to the risk of spreading the virus during community events.  This is just one of the many public events that have been cancelled or had their attendance restricted as preventative measures continue.  As the 1959 photograph illustrates, Homecoming festivities for the University of Nevada incorporate large community participation with families lining the street to watch the parade.  Homecoming also coincides with sporting events such as basketball and football, which foster community support and team building as area residents rally their support for the Wolf Pack.  However, state and county restrictions have limited the number of people who can attend sporting events. New regulations have also implemented distancing protocols which restrict social interaction beyond the group that one came with.  The 2020 photo recreation offers a remarkable contrast to the busy community atmosphere of the 1959 photograph.  As I stood at the base of the arch across the street; no one was standing near me; and there was very little vehicle traffic down North Virginia Street.  In some ways, this can represent the social isolation that the pandemic restrictions have forced on many, separating people from face-to-face support and socialization critical to community life.  In addition to the dramatic contrast between the parade event and the recreation, there was comparatively little activity downtown even when compared to a normal day, further evidence of the impact of the pandemic and subsequent restrictions on day to day operations of business.  Looking out for the health and well-being of the community during the pandemic requires taking precautions by wearing masks and maintaining social distance, and each individual must do their part.

In addition to showing the stark contrast of the pandemic's impact on social events, the included photographs also showcase the change that the city of Reno has undergone since 1959 as well as the continuation of similar themes.  At the time of the first photograph, Reno was experiencing unprecedented growth and an economic boom driven in large part by the emergence of a tourism-based economy largely dependent on gambling and casinos, whose growth was facilitated by Americans’ increasing disposable incomes as well as the improved travel over highways with increasing automobile ownership (1).  In the 1959 photograph, the parade under the arch takes place in front of a building advertising their bar and the ability to gamble on their slot machines.  In the 2020 photograph, the scenery behind the arch is dominated by the Whitney Peak, the first downtown hotel to operate without a casino, as well as large casinos and liquor stores.  Reno continues to grow and profit alongside the prominent gambling establishments, continuing themes of the city's early development, and additional industries and social centers have arisen in the downtown area.

These photographs illustrate the harsh contrast between the festive atmosphere of community-building University events and the social isolation caused by the COVID-19 pandemic.  As the pandemic and safety responses continue, the full impacts of the deadly virus, social seclusion, and unemployment crisis on Reno have yet to be realized.  However, these future challenges present opportunities for the Reno and University communities to unify and overcome the effects of the pandemic together.