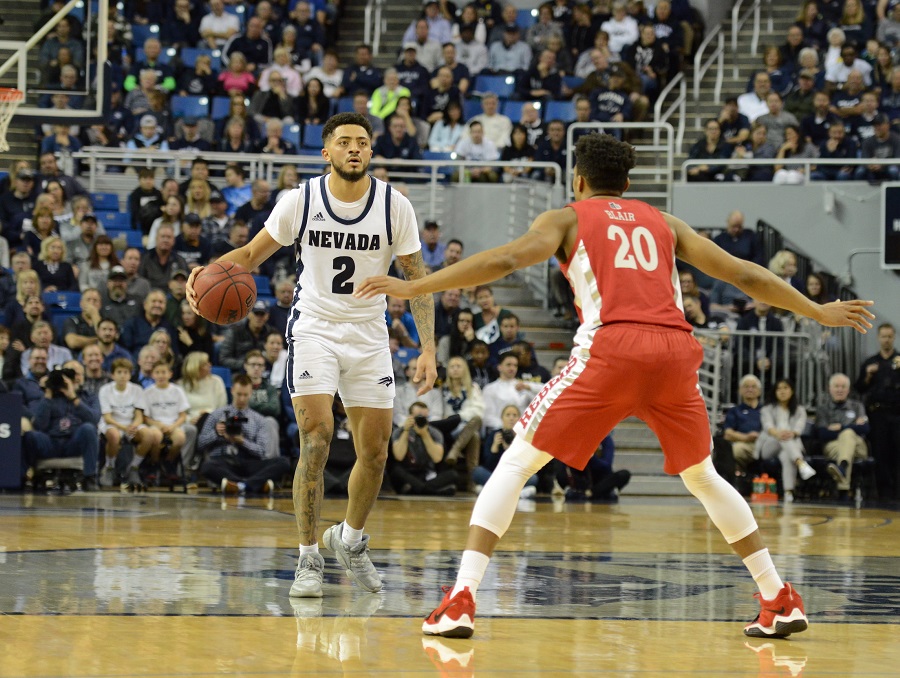 There might not be a better backcourt in the Mountain West Conference than Wolf Pack guards Jalen Harris, Lindsey Drew and Jazz Johnson, and the Pack trio’s talents were on full display Wednesday in an 86-72 victory over in-state rival UNLV at Lawlor Events Center.

Harris scored a game-high 28 points, while Drew added 14 points and Johnson 19 to give the Wolf Pack their fifth straight victory over the Rebels before a season-high crowd of 10,325.

The Wolf Pack improved to 5-3 in Mountain West play, 12-8 overall, and snapped the Rebels’ three-game winning streak. UNLV dropped to 6-2 in the Mountain West and 11-10 overall.

Nevada Coach Steve Alford, who was coaching in his first Pack-Rebels matchup, said afterward he was pleased with his team’s ability to get to the free throw line (Nevada made 25 of 29 free throws) while not turning the ball over (Nevada had only five turnovers, a remarkable figure given UNLV’s pressure defense) as well as playing sound, aggressive defense (UNLV was held to just 35 percent shooting). After UNLV narrowed the Pack’s lead to 36-33 early in the second half, the Pack quickly went on a run to put the game out of reach.

“Really pleased with our guys,” Alford told Nevada Sports Net’s Chris Murray after the game. “Obviously a big game for us, a big game for them. They’ve been playing really well and do a lot of good things. … We started to make some shots, and that fueled it. To lead as much as we did in a league game means we did some really good things.”

While Nevada’s guard play was characteristically solid – the Pack made 11 of 26 3-pointers – the team’s inside play was bolstered by freshman center K.J. Hymes, who scored eight points, grabbed six rebounds and blocked three shots. Senior Nisre Zouzoua, making a strong case as the Mountain West’s best sixth man this season, came off the bench with yet another impressive performance, scoring 11 points, all of which seemed very timely, coming whenever UNLV was attempting to creep back into the game.

The Pack will next meet New Mexico on Saturday at 5 p.m. at Lawlor.