Students face the advantages and disadvantages of online debate 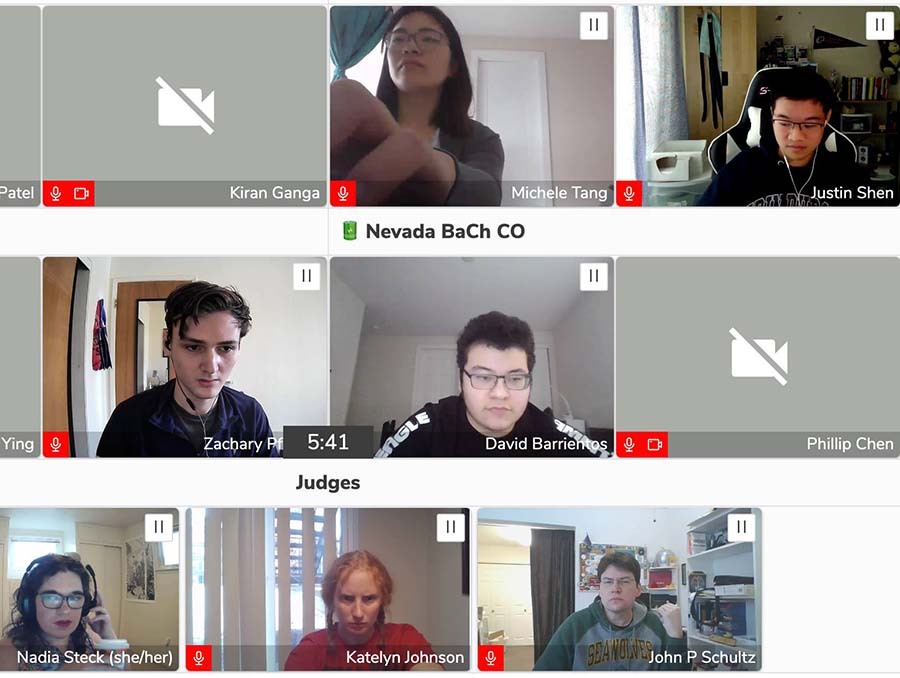 Students face the advantages and disadvantages of online debate

The University of Nevada, Reno Debate Team competed in its final two tournaments the first weekend of December, ending their fall semester of debate with a victory. The team competed at the Pacific Southwest Collegiate Forensics Association Fall Championships hosted by Moorpark College Friday and Saturday, along with competing in the Seattle University British Parliamentary Debate Tournament Saturday and Sunday. At PSCFA, University student Avery Callis took home the bronze metal, and in the Seattle competition, the team had its first novice win in a national-circuit BP tournament.

“We’ve done pretty well this semester,” Philip Sharp, debate team coach and forensics director in the College of Liberal Arts, said. “We started out with a couple of National Circuit Tournaments at the beginning of the year and we had some success there. As we transitioned to some regional competitions, we did very well at the University of the Pacific tournament about a month ago and this last weekend we did well at two different tournaments that we competed in.”

Just like last semester, the team is not able to travel to other college campuses for competitions. Instead, each debate takes place online using Zoom. Sharp says the technology and structure of this semester’s online debates have improved significantly compared to spring debates at the beginning of the pandemic. Some students who have felt comfortable doing so have safely met with coaches on campus during competitions, but other students participate from their homes in Reno and across the country.

“Of course, there are still limitations that we face in virtual debate,” Sharp said. “Students have to navigate things like poor internet access at their homes, roommates, messy rooms, all the same things that students go through trying to take their classes. The difference is that when you’re performing you can’t always turn off your video and it’s important that you hear what your opponents say in a debate, so poor internet can really affect you.”

Sharp recalled how recently one of his students lost internet connection during a semifinal debate, in which the partner called the student on his cell phone so he could continue the debate. The pair did not lose the round, but it did affect their performance.

Debate team member Nickie Moore is a senior at the University double majoring in history and philosophy. He has been apart of the team since his freshman year, and although his last year may look different, his spirits are still high.

“This season has been unlike any season before it,” Moore said. “Practices and tournaments are all virtual. Although the pandemic has changed how we operate, we still have done well this season. Even though everything is online and I have been unable to meet the new members of the team physically, we still have a sense of community with the team. Although we are not physically together, we do practice a lot virtually, so we have been able to form a sense of community through that. I will say that I do miss going out to get dinner after tournaments or hanging out at hotels staying up late when we used to travel.”

Phillip Chen and David Barrientos are both freshmen this year and brand-new members of the debate team. Despite having an unusual first season on the team, they have enjoyed it immensely.

“Even though I’m new, even though I’ve never done speech and debate before, not even in high school, and even though I would probably consider myself the worst one in the entire team, my teammates have always been supportive and kind to me,” Chen said. “I’m grateful for everything they have done for me, in helping me grow and improve. It’s really thanks to them and my coach that I’ve been able to make it this far and ultimately winning my first finals in novice BP.”

Barrientos competed in high school debate all four years and chose to continue his debate career into college as well. He said the transition has gone well and his coach and teammates have been supportive and helpful in teaching him the ropes of college debate. As the season has ended, he is already looking forward to next semester.

“I’m definitely excited for next semester,” Barrientos said. “One of the big things you always hear, from celebrities or the CDC themselves, is that it’s important to hold onto some form of normalcy so one of my forms of normalcy was being able to engage in debate. It’s been a really good stress release for me and a good learning opportunity so I’m definitely excited to hit the ground running next semester.”