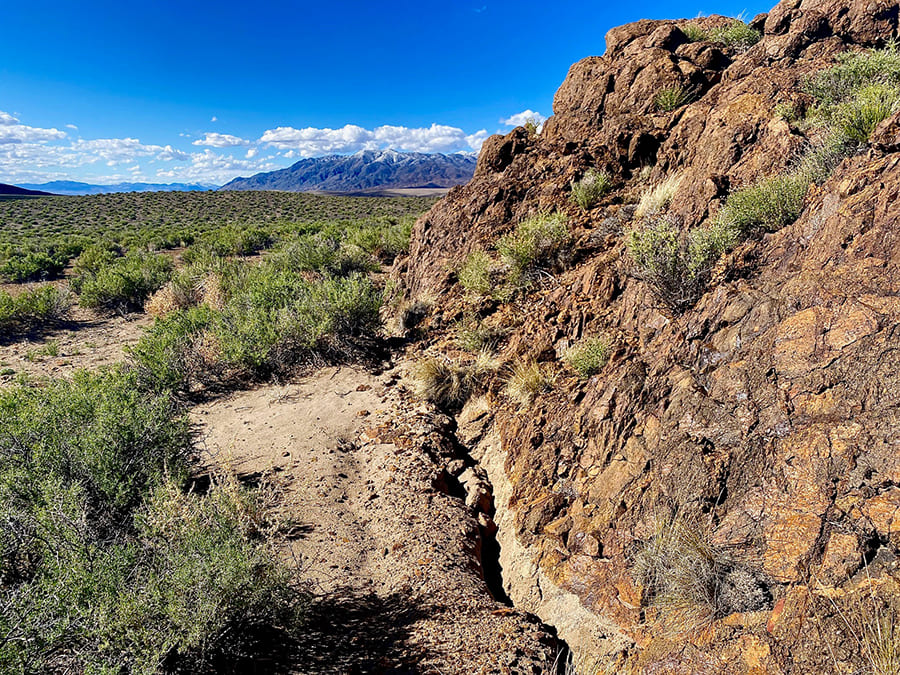 The magnitude 6.5 Monte Cristo Earthquake is still rolling. Two weeks after it woke Nevadans, the Nevada Seismological Lab has tracked a phenomenal 6,500 aftershocks - four at magnitude 5.0 and greater, from the earthquake sequence.

“The aftershocks could continue for years, a decade,” Ken Smith, seismic network manager and associate director of the Nevada Seismological Lab, said. “The large 1954 earthquakes in December of that year were preceded by a series of large magnitude earthquakes and aftershock sequences that began in July. So this may be an indication that this is not over. Fortunately today we have real-time data to observe the progress of activity that may suggest another larger event. Keep in mind, though, each one of these energetic aftershock sequences following large Nevada earthquakes evolve in their own unique ways.”

The USGS, which is partnering with the Nevada Seismological Lab to monitor the earthquake sequence, estimates that for the week through June 6, there is a 99% chance of a magnitude 3 or higher earthquake with as many as 22-49 such events, the chance of magnitude 5 and above is 39% with a chance for up to three of those, magnitude 6 and higher is 6% with a potential for two in that range and the chance of a 7 or larger is 1 in 100 such an earthquake is possible but with a low probability.

Within minutes of the 4:03 a.m. Monte Cristo earthquake on May 15, members of the University of Nevada, Reno’s Seismological Lab were up and at full speed. The Lab began verifying their automatic notification of the 6.5 shaker, the largest in Nevada in 65 years, and worked with the USGS to get the data out to the public. It also set in motion a flurry of activity to get members of the lab to the event site to place additional seismometers to better monitor the activity.

Eight temporary telemetered seismographs and a local microwave telemetry system were installed, beginning on the first day, that bring the data directly back to the University on the seismology lab’s statewide microwave network. Other partnering agencies, including USGS and Mission Support and Test Services from the Nevada National Security Site, installed additional instrumentation.

“Adding additional instrumentation is very important,” Smith said. “We try to get the optimum coverage to achieve the best event locations. We have to consider the local conditions and line-of-site for telemetry. To be able to achieve good locations the ideal station are located within one focal depth of the activity. For the M6.5 the closest station was at about 36 miles - almost impossible to get good enough location to resolve the fault structures. The aftershock zone is about 12 miles long and the instruments are now located within the aftershock zone, and outside of it, to get the best coverage.” 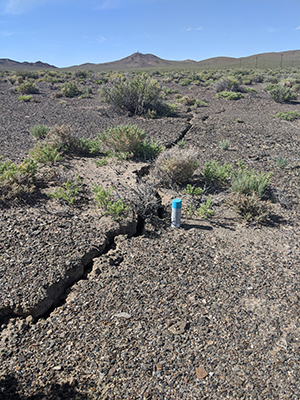 Seismic instruments indicated the earthquake originated 1.7 miles below the surface in the shallow crust of the North America plate.

Also after the early morning magnitude 6.5 Monte Cristo Earthquake on May 15, geoscientists from the University’s Nevada Bureau of Mines and Geology quickly prepared for a road trip. Led by the Bureau’s Rich Koehler, geologists and seismologists from the Bureau, the Nevada Seismological Lab, USGS and California Geologic Survey rapidly mobilized field teams and drove to the epicenter in a remote area just southeast of the small town of Mina and about 35 miles from Tonopah.

The teams worked to identify and record surface ruptures, displacements and other field observations. Geologists looked to characterize and map how the rupture affected the earth's surface: by taking measurements, photos, and GPS points of cracks along fault lines through the desert.

“The surface rupture mapped by the field teams extends for about 10 kilometers west of Highway 95,” Koehler said. “Interestingly, only minor surface cracking was observed east of Highway 95 in the vicinity of the epicenter. Efforts are ongoing to better define the eastern end of the surface rupture. Left-lateral offsets ranged from about 5-15 centimeters, but averaged around 10 centimeters. Vertical offsets up to 10 centimeters were also observed on some fault traces.” 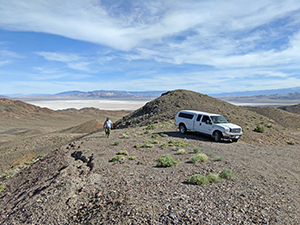 Various crews walked through the landscape looking for surface ruptures and coordinating through cell phones, social media and nightly briefings to disseminate the information to other team members. Being the largest earthquake in Nevada in more than 65 years, and its position within the central Walker Lane, the event generated a similar amount of interest within the earthquake geology community as the Ridgecrest earthquake did in 2019.

The team took care to travel in separate vehicles and follow social distancing protocols that normally aren't required for field work. Koehler was joined by geologists Seth Dee and Craig dePolo, also from the Nevada Bureau of Mines and Geology, Steve Wesnousky from the Nevada Seismological Laboratory and Ian Pierce a geologist who recently completed his doctorate in the Department of Geological Sciences and Engineering.

“I was in the epicentral region by 3:30 p.m.,” Koehler said. “We camped during the entire field response basically directly above the epicenter. Not only was the epicenter over 20 miles from the nearest hotel, camping provided a better situation to maintain social distancing required by the university. Additionally, it was great to feel and hear the hundreds of aftershocks occurring beneath us.” 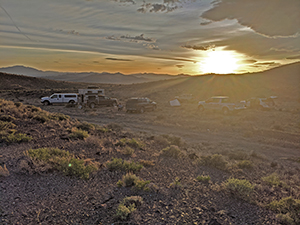 Due to the number of geologists expected to arrive to conduct reconnaissance, and discussions with the USGS and CGS, Koehler was asked to take on the role of the field response coordinator for the State.

Kohler was in contact with the USGS and the California Geological Survey to help them plan logistics and the size of the field crews they were planning on sending out to the epicenter. Some researchers came to the area independently, and he worked with them to ensure their observations were incorporated into the mapping database. The Bureau of Mines and Geology is compiling the observations from the various teams into a comprehensive map of the surface rupture.

The Nevada Geodetic Laboratory, a unit in the University’s Nevada Bureau of Mines and Geology, continues to actively measure ongoing crustal deformation in the area. They use Global Positioning System satellites and ground stations to study tectonic movement.  Owing to work they had done weeks earlier, they had sensors on the ground and recording data in the area when the event happened, catching it in the act. So far they have seen permanent movement of the ground over 120 miles from the epicenter.

“The Nevada Geodetic Laboratory was constantly monitoring the event during our reconnaissance and was in the field deploying temporary stations a few days after the event,” Koehler said. “The geology field effort was greatly assisted by the rapid availability of InSAR data that was being processed by USGS, JPL and other researchers and was being shared with the field reconnaissance teams in real time. This helped us zero in on the areas that experienced surface rupture.” 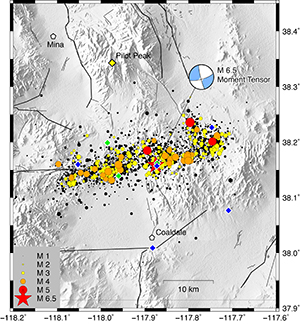 In 2004 the Nevada Geodetic Lab started to build and expand the "MAGNET" network of GPS stations. One major objective of the network was to capture the movements caused by earthquakes in the Great Basin and learn more about them.

"MAGNET” now spans the Great Basin across Nevada and into California, Oregon, Utah, and Arizona with 400 GPS stations. The lab is deploying GPS stations at about 30 locations around the epicenter and aftershock sequence of the May 15, 2020 Monte Cristo Range M6.5 earthquake. All of these stations will be visited multiple times in the coming months to download continuous observations.

“We have a field crew of two out camping right now (105 degrees in Panamint Valley last night),” Professor Geoff Blewitt, director of the Geodetic Lab, said the week of May 25. “They are in the Owens Valley area collecting GPS station equipment that can be moved to the area of the Monte Cristo Earthquake.”

Professor Bill Hammond and Technician Bret Pecoraro collected mobile equipment from the locations of the Ridgecrest earthquake and southern Sierra Nevada to deploy at the Monte Cristo epicenter area.

“This magnitude 6.5 earthquake happened well inside this dense network of stations,” Blewitt said. “Without such a dense network we would not be able to learn as much as we have about this earthquake. We have about 50 mobile GPS units, so we move the units around to gather data at all the stations.”

“Large earthquakes occur infrequently, so to study a large earthquake in our backyard is a rare opportunity” Pierce said. “Furthermore, many earthquake effects are considered "perishable," that is, cracks fill with sand blown in by the wind and rain, and aftershocks eventually stop, so to understand earthquakes these types of data must be collected as quickly as possible. Hopefully, the results of these efforts will help us to better understand how earthquakes affect our region, and ultimately to mitigate seismic hazards to our communities and infrastructure.” 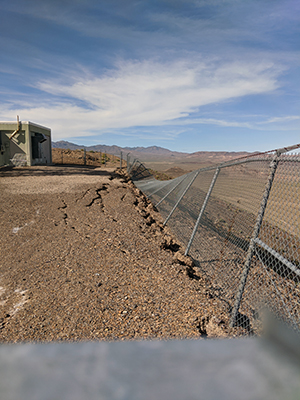 “We can expect earthquakes in Nevada,” Jim Faulds, director of the Nevada Mines and Geology in the College of Science, said. “They’ve happened for millions of years in the Walker Lane.”