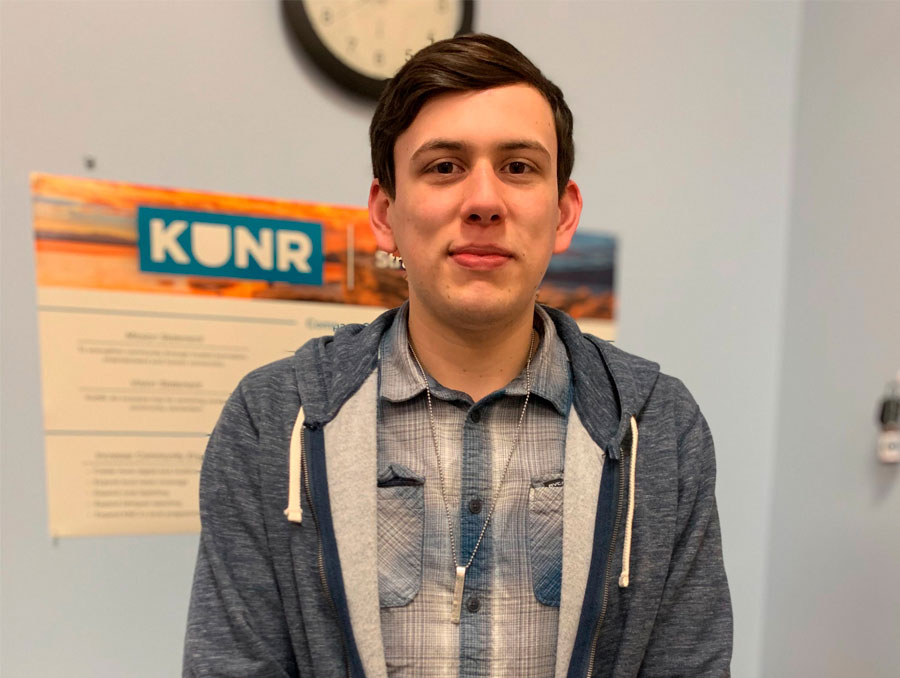 Some journalists work for months before having their work featured on a national outlet; some work for years. For Jayden Perez, a student at the Reynolds School of Journalism, it took only three weeks.

Early voting day for the Nevada Democratic Caucus occurred on Feb. 15, 2020, at the Joe Crowley Student Union at the University of Nevada, Reno. Hundreds of people showed up to cast their votes in the third nominating contest for the democratic nomination in the 2020 presidential election. Standing in the crowd was Perez, with an audio recorder and camera in hand, covering the event.

Only three weeks prior, Perez started an internship at KUNR, Reno’s NPR affiliate station, as a student reporter. Interns at KUNR, a station with 70,000 weekly listeners, play an essential role in creating content for their audience.

Billman oversees all news coverage that makes it on air at the station and helps guide the interns as they develop real-world reporting skills.

The work done by Billman and her team is meant to make it on air, whether it is created by a staff member or student reporter. However, Perez having his story featured nationally just a few weeks in is a feat that few reporters at KUNR can add to their resume. Listen to his report on the KUNR website.

“We’ve never really had that happen before,” Billman said.

“This was the second time I was heading out into the field. I had been out to get some photos before, but most of my work had been in-studio assignments,” Perez said.

Before starting at KUNR, Perez had some experience with student journalism and broadcast. He spent time working the arts and entertainment desk for the Nevada Sagebrush, the University’s student-run newspaper. While working at the Sagebrush, he also hosted a show on Wolfpack Radio called “Alternative Airways.”

Radio is something that Perez has always been interested in pursuing. Many of his classes focus on broadcast journalism, and he plans to continue interning at KUNR until he graduates from the Reynolds School.

“While schoolwork is important, it speaks to dedication to go that extra step, to work harder and go that extra mile to get your work featured,” Perez said. “Interning is essential to finding out what you want to do.”

Perez is not the only student of the Reynolds School who has recently filed a spot on NPR with news about the election. Bree Zender is a graduate student pursuing a master’s in journalism. Although she is a student at the University, she works full time as a radio journalist and host of KUNR’s “Morning Edition” talk show.

Zender has worked as a professional radio journalist for almost four years. After graduating from the University of Montana in 2016, she found work in San Luis Obispo, California, for KCBX Public Radio and then joined the team at KUNR in 2017.

Zender also covered the Nevada Democratic Caucus and filed spots on NPR with her reporting. With her years of experience, Zender is well aware of the steps necessary to have a story featured on NPR.

“For me, it was a lot of pitching and getting to know people,” Zender said. “The process that they have, you have to know the right person to contact.”

While Zender already knows who to contact, Perez and the rest of the student reporting team are fortunate to have Billman and the staff at KUNR to help them along the way.

“We are a pretty hands-on newsroom. Once we figure out their passions and skills they want to develop, we pair them up with a professional who they can learn a lot from,” Billman said.

Billman is proud of the work her news and student reporter teams are doing. “They’re not doing busy work; they’re really serving their community.”