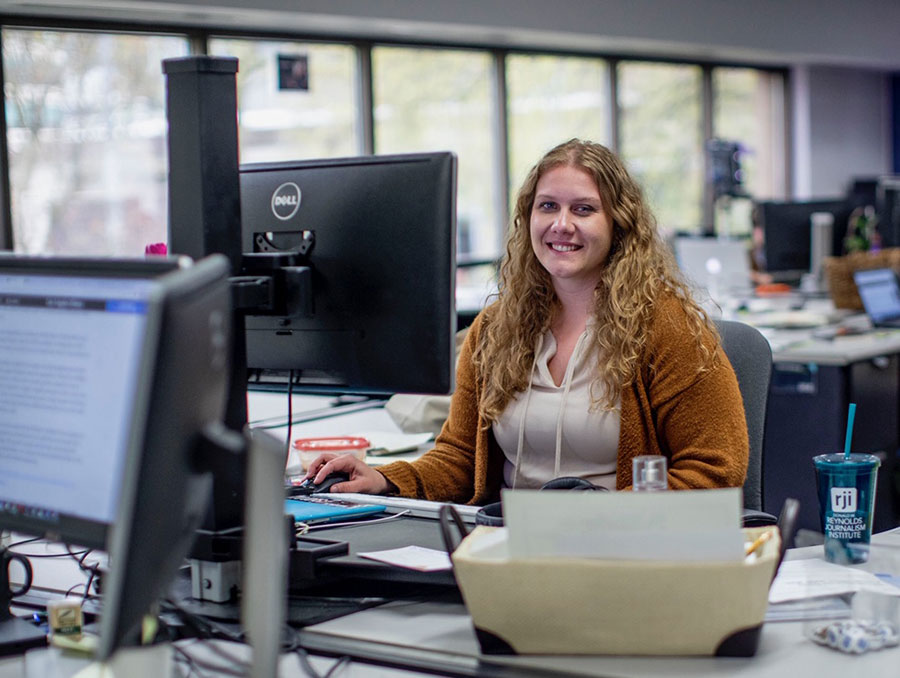 Cambria Roth, a 2013 Reynolds School alumna, works on contract as an audience editor for HuffPost. Although she normally lives in New York City where the national news organization is headquartered, she is social distancing during the COVID-19 pandemic at her parents’ home in Oregon.

“It is kind interesting to start a new job with the George Floyd protests and everything that has been happening within the United States,” Roth said. “I’ve been working the night shift because of the time change.”

Roth started with the HuffPost in May 2020. As an audience editor, she searches Twitter and other social media platforms for potential story ideas for HuffPost’s reporters. She also provides guidance on headline writing and content search engine optimization and keeps a close eye on the website’s analytics to determine which stories are performing best.

Recently, she helped with reporting about the Black Lives Matter protests.

“I was the person who was mainly focused on [the protests] and covering them at night when they were happening,” Roth said. “It was my first breaking news experience for a national publication, which was kind of nerve-wracking at first, but I feel like I got a hold of it because I had these other positions that had prepared me for it.”

Landing the job at the HuffPost not only added national news experience to Roth’s resume, it also got her back in the journalism industry after several months of unemployment.

In 2019, Roth moved to New York City from Seattle to start a job as a fact-checker for NewsGuard, a journalism start-up that rates the credibility of journalism produced by news websites.

“I knew it wasn’t my end goal, but it was something that would help me get to New York,” she said. “I knew I wanted to do audience engagement, and I wanted to find a role that was more focused on that eventually.”

Five months later, she found another job in audience engagement, becoming the audience and growth manager for the Brooklyn Eagle, a daily paper for the New York City borough. Her focus was a community outreach project on gun violence.

“I put together an event that brought together people from the community, news organizations, activists and people who were working on the gun violence issue in Brooklyn, and we had a discussion about how media could do a better job of covering gun violence.”

“I really started to think, ‘Is there a different career path? Can I get any different skills that would make me more desirable?’”

Unfortunately, she never finished the project. In January 2020, the paper laid her and the rest of the newsroom off. Shortly after, the coronavirus pandemic hit New York City.

Since she was unemployed, Roth made it her job to apply for jobs. She created sets of resumes and cover letters to showcase her varied skillsets, and she participated in the Digital Women Leaders program, meeting with several journalism female leaders one-on-one.

“I really started to think, ‘Is there a different career path? Can I get any different skills that would make me more desirable?’” she said. “I had to remind myself that I was a desirable candidate and to keep working really hard to show news organizations that I could do the job.”

She struggled for several months to secure a new journalism position and even considered working in a different industry. But, in April 2020, Roth unexpectedly received word from the HuffPost.

“The HuffPost actually ended up reaching out to me because I had applied to another position there, and they were like, “Hey, we filled that position, but we thought you might be interested in this one,’” she said. “It was an audience editor role, so I applied and went through the whole process and ended up getting hired.”

Now, Roth has worked a few months at the HuffPost. She attributes obtaining her position to previous job and internship experience.

“Getting a lot of work experience [in Seattle] really helped me be good at my job now because I had all of that experience from a smaller news market,” she said. “For me, it was about playing the slow and long game, rather than being paid nothing to try and get experience.”

She also advises students wanting to work in national news or in a bigger city to put in extra effort to get there.

“[Be] willing to put in extra hours and extra work and willing to take on projects,” Roth said. “Put in extra time. It won’t go unnoticed.”