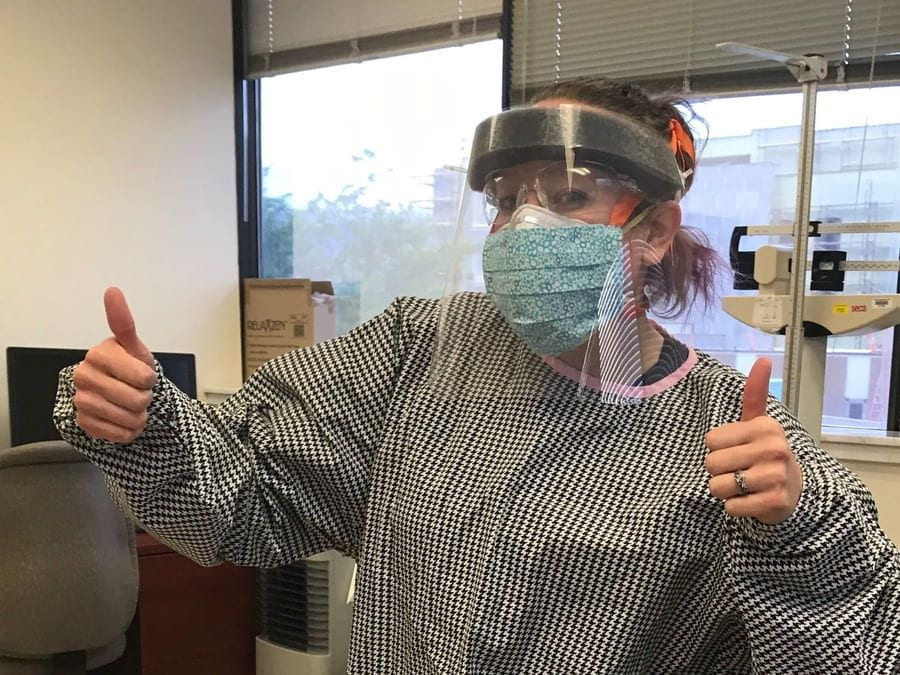 More than 750 hospital-style gowns have been made and delivered, as of May 31, by a community-based, University-led network that is responding to the need for personal protective equipment (PPE) prompted by the COVID-19 pandemic. The gowns are now being used by staff and visitors at Renown Health facilities in northern Nevada.

With NVIE’s connections, the network of collaborators grew to include local manufacturer Via Seating, which employs professional sewers, along with more than 30 volunteer sewers organized through the area’s Just Serve organization. Renown Health has helped source material and the Art Fabrication Lab in the College of Liberal Arts, known as the Fab Lab, is helping cut patterns and fabric. More recently, Evco Interiors and independent community volunteers have joined the effort.

NVIE extends resources and consulting to help Nevada businesses in manufacturing, construction and mining. This includes working with manufacturers to implement the Lean System, an improvement model for manufacturing processes and competitiveness.

Having worked with Via Seating to employ the Lean System in their businesses processes, NVIE Project Manager Rhea Gustafson appreciated seeing them bring these process improvement principles to the gown project.

“You can see what they learned through Lean coming through this volunteer effort,” Gustafson said. “The cutting and sewing process was slower than what they are used to, but they have shortened their production time and increased productivity using standardized work and automation.”

Via Seating employees have roughly doubled their productivity and are currently making more than 30 gowns a day. In total, Via Seating employees have made more than 400 gowns. They are doing so both as part of their work time and after hours, as volunteers. They also are maximizing the donated material by devising a pattern for face-coverings that utilizes the extra cloth, and they are making and donating these as well.

NVIE has had a birds-eye view of the contribution of Nevada manufacturers toward making PPE, hand sanitizer and equipment necessitated by the COVID-19 pandemic. To support planning and response through the Governor’s Office of Economic Development, NVIE surveyed several hundred Nevada manufacturers to get an idea of the capability and capacity statewide. As Gustafson said, this opened a conversation with manufacturers. Many of these businesses must stay focused on their regular processes which are now deemed essential, while others have been able to pivot and are deploying personnel and equipment toward these new needs.

The gown effort is making a difference as are other University-led efforts to develop PPE including face masks, face shields and battery packs for respirators. Of the involvement of makers and sewers, Daniel Smith, makerspace specialist with the Innevation Center, said, “Makers are all about getting things done creatively quickly and with limited resources. This is exactly the situation and time for makers to step up.”