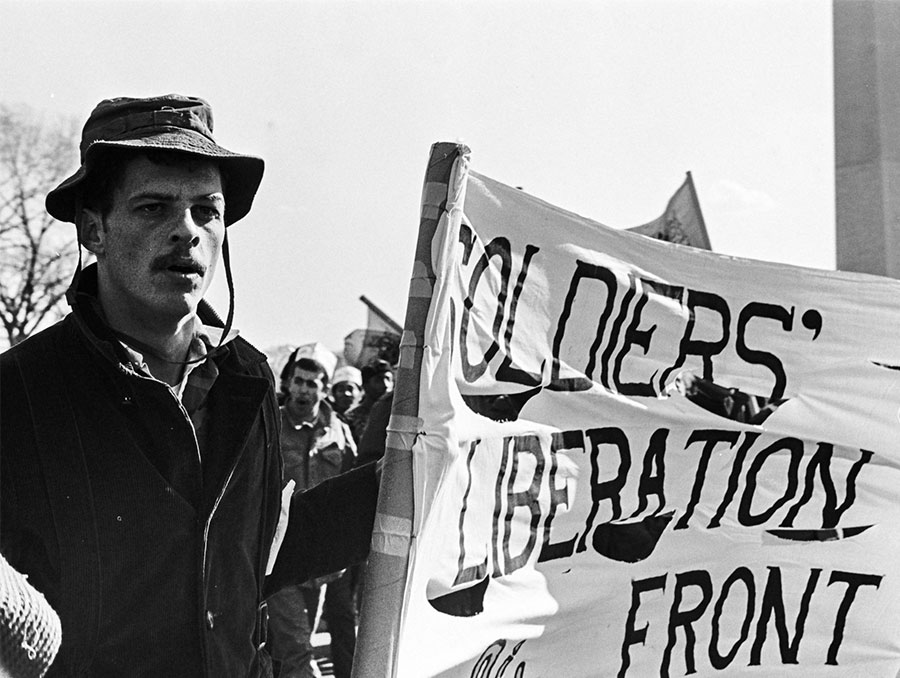 Howard Goldbaum pressed the shutter on his camera. Over the years, he would carry many cameras and tell countless stories. This camera was quite different from the ones most individuals use today. After his last shot, he did not turn it off. Instead, he wound it up and replaced the spool of film. Later, when he developed the photographic negatives, he saved the best.

“I had boxes and boxes of negatives going back to my first days in photography,” Goldbaum said. “They traveled with me. From Connecticut to Puerto Rico and Illinois, then finally a shelf in my garage in Reno.”

Technology and time seem to be the only thing separating Goldbaum and the students sitting just a few feet away from him. From 1967 through 1970, professor Goldbaum was a lot like his students at the Reynolds School of Journalism at the University of Nevada, Reno. Many of them participate as student reporters in organizations like the Nevada Sagebrush and Reynolds Sandbox. As a student, Goldbaum worked as a staff photographer and photo editor for The Connecticut Daily Campus, the University of Connecticut’s student-run newspaper.

Almost five decades later, Goldbaum donated his photographic negatives from that time back to UConn, the prints from those negatives are now on display in an exhibit, “UConn through the Viewfinder: Connecticut Daily Campus Photographs from the Howard Goldbaum Collection.”

“Well, it came about mainly because I don’t throw anything away,” Goldbaum said. “It occurred to me that maybe the people at the library at UConn would be interested in having these boxes of negatives, and it turns out they were.”

The exhibit will be displayed through March 13, 2020, in The William Benton Museum of Art. The collection, which is made up of negatives from his time as a photographer for the student newspaper, can also be viewed online on the UConn library's website.

UConn’s own newspaper, UConn Today, wrote an article covering the time Goldbaum spent at his alma mater in more detail.

A professor at the Reynolds School since 2003, Goldbaum is with the University Studies Abroad Consortium in Italy this semester, preventing him from seeing the exhibit in person.

“A bunch of my friends went; they took pictures. They had a nice party in my honor; too bad I couldn't party with them.”

Goldbaum has a history of success in visual storytelling. His projects “All Around Nevada,” Voices from the Dawn” and “VR from the Sky” have all won awards. The projects can all be seen on Goldbaum’s website.

“I started seriously in my sophomore year in high school when I joined the yearbook staff, when they needed someone to volunteer to be the photographer. They gave me a twin lens reflex camera, and I started really enjoying it.”

Many of his projects worked in aspects of virtual reality (VR), which he incorporated into his curriculum at the Reynolds School.

“Every year that I taught 208, my students all had a VR assignment. They had an introduction to the technology and they had VR in their visual portfolios. I know the j-school is planning to hire some folks who will be there next year who will be interested in continuing VR and other new technologies in the curriculum.”

His love for visual storytelling led to a career of more than 40 years as a professor of multimedia. Goldbaum will retire this July after 17 years at the University of Nevada, Reno and prior to that 26 years at Bradley University in Illinois.

Past students of Goldbaum may remember hearing “when you see a sign that says, ‘no photography allowed,’ you need to say to yourself ‘well, that doesn’t mean me.’”

For future storytellers and students who will not have the opportunity to have him as a professor, he leaves this advice, “embrace verisimilitude.”