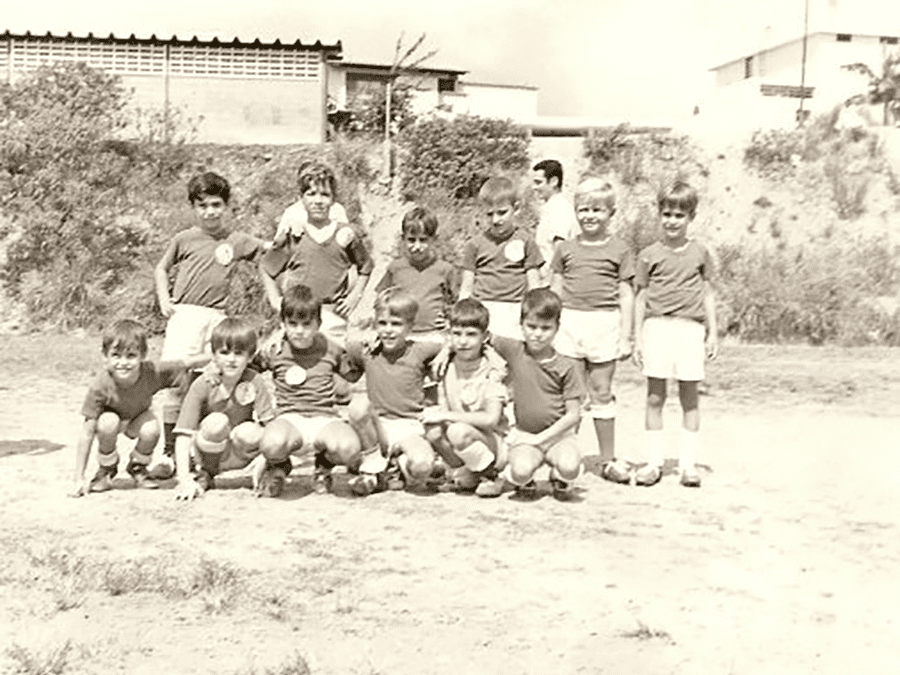 “The idea that began modestly in the feverish imagination of some enthusiastic members of the Basque Center is taking the dimension of an unprecedented success.” This is how the chronicler of the Euzkadi magazine in Venezuela expressed himself in April 1945. After being created in September 1944, the Basque Center’s soccer team entered the country’s first league in the spring of 1945. The Venezuelan Football Federation wanted to distinguish the Basque community and the Basque exiles “who have been lucky enough to live in this hospitable land” wanted to “participate more intimately in the Venezuelan society” and recognize the generosity of a country that had welcomed them when they had been expelled from the motherland.

The team was built on Basque players: the “great international defender” Kepa Areso, who came especially from Buenos Aires (Argentina); Triki, Gerardo Bilbao, Joaquin Yarritu, Iñaki Irure, Imanol Valdés, Joseba Badiola and Eugenio Olabarrieta from the Loyola Sport Club (one of the best teams in the Venezuelan first league); Jose Miguel “Terremoto” Diez of Bilbao arrived from Mexico and Belardi, Jorge García and Félix García from the team Litoral OSP. The members of the first board of directors were Julián Lizarralde, Juan Olasagasti, Juan Urbistazu, Marquet, Ricardo Azpiritxaga, Domingo Irure and José Elgezabal. The home field of the team was the Olympic stadium of the Central University of Venezuela and its badge the Seiak Bat (the Basque coat of arms.) Their colors were red, white and green, as in the Basque flag.

The young team quickly surprised by winning convincingly in their first two games. In its debut, the team faced -ironically- the Deportivo Español, the Spanish team. It happened on January 27, 1945; the people in the stands were highly exited and everyone played well: numerous ikurriñas (Basque flags) were seen and a constant “Gora Euskadi Askatuta” (Long live the Basque Country) accompanied the players all over the ninety minutes of the game. Many of the of the Spanish team supporters were Republican exiles so the members of the Francoist dictatorship’s legation in Venezuela had a bitter pill to swallow. Regarding this triumph, the sports chronicler of the newspaper La Esfera reported that “it has been a while since we have seen a match like the one that took place yesterday between two of the three Deportivos that are heading the championship, that is, Deportivo Vasco and Deportivo Español. It goes without saying that we had not witnessed a first-half like yesterday’s so long ago. It was indeed an exceptional match. We can say without embarrassment as if we were speaking in Latin: Football habemus! It was a beautiful, brave, courageous first half, of such speed that neither the most courageous Spanish center-forwards nor the bravest and most stoic defenders could cope with it. Without a doubt, these two teams will provide great football afternoons throughout the tournament. In the rounds of the tournament, when the clash of the two teams, the Español and the Vasco, is announced, the stands will be insufficient to contain the public that will witness the clash”.

Numerous ikurriñas (Basque flags) were seen and a constant “Gora Euskadi Askatuta” (Long live the Basque Country) accompanied the players all over the ninety minutes of the game.

In their second match against the Unión, the Basques prevailed 2-1, a victory that according to many sports reporters was achieved by the narrowest of margins. Atxerre, the sports chronicler for La Esfera, wrote: “This is the way the Basque team is going in the national soccer championship: Brilliant to date; we trust that the days of glory and triumph will be repeated in remembrance of our beloved motherland”. For some time, the team topped the rankings and “Terremoto” (Earthquake) Díez with his first 18 goals became the undisputed scorer of the championship. He managed to score against every team in the league, including the three goals he scored against Loyola, the leading team. He scored 27 goals in 21 games. When asked about his nickname, the “pitxitxi” (top scorer) assured that “it is a nickname that someone gave me in Cuba… but in reality, I am just a gentle breeze.” The team finished the league in third place after Dos Caminos and Loyola. Meanwhile, the second team of the Basque Center, which was contesting in the second league, topped the table.

Jose Ibarguen, president of the extraterritorial board of the Basque Nationalist Party in the Venezuelan exile, wrote to Doroteo Ziaurritz, president of the party in Europe right after the liberation. In his letter, he ensured that the Basque Center’s team had played so well that the general opinion among sports reporters was that the Basque team should have won the tournament. Most chroniclers agreed that the Basque contribution to the league had increased the passion for football in Caracas and certainly the Venezuelan Football Federation always valued the potential of the Basque community as an incentive for the development of enthusiasm for soccer in the country.

That of 1946 was a good season for the Basque eleven. On June 8, 1946, the Deportivo Vasco achieved a record by beating the Litoral 7-0, a result that caused a fight between two players of the rival team and their expulsion. On September 10, the Basque club beat Venezuela 7-1 with four goals by “Terremoto” and on September 28 they beat Loyola 7-2 with another four goals of the “pitxitxi”. On November 21, 1946, the team played the first match with artificial light in the history of Venezuela. This, which was a friendly match against the Venezuelan National Team, was played at the Cervecería Caracas stadium in San Bernardino, in the presence of three thousand spectators. After the kickoff given by the artist Carmen Amaya, the Basques won 4-3. Despite the results, the loss of international players placed the Deportivo Vasco in fourth place. However, as the passion for football grew other problems began to occur such as the “tanganas”, real pitched battles between followers of different teams that jumped onto the field, such as the one that the Basque referee González Zulaika had to deal with in the match between Deportivo Venezuela and Dos Caminos.

In 1947, the board of directors of the Basque Center entrusted “Terremoto” Diez and Blas Garate to find soccer players in the Basque Country to join a first division team. In five years they built a new powerful team. In 1953, the Deportivo Vasco finished the league in third place, and in 1954, under the direction of Maximo Andonegi, the team became the champion of the Venezuelan first league after beating the Loyola in a match played precisely -what a paradox!- on Saint Ignatius Day. The team was built with leading figures of the Basque soccer of the day: Elgezabal, Aitor, Gurutzeaga. Aizpurua, Mantxobitas, Caballero, Rada, Noel Díaz, Fano, Akorreta, Lazkurain, Arriaga, Cojito, Etxaburu, Garate, Aso, Burgaña, Leizaola, Mantxobas, Ojanguren, Peláez, Duplay, and Douglas. The coach was Mandaluniz.

Two years later the team shared second place with the La Salle. In 1957, the Deportivo Vasco became one of the six founding teams of the Venezuelan Major Soccer League and in 1964 the Basques won their last trophy in the main league, the Copa Disciplina of the Caracas Cup.

Thereafter, the Deportivo Vasco stood out in the “Veterans” category and obtained the following trophies between 1954 and 1966:

In addition, in 1950 the junior team of the Basque Center won the promotion championship in the second division and in 1960 the youngest players won the Junior National Championship.

In 1966, Deportivo Vasco left the first division after twenty years of dreams, passion, and will. They never renounced the policy of using Basque players.