School of the Arts’ #ArtAt6Feet series: ‘We can get through it’ 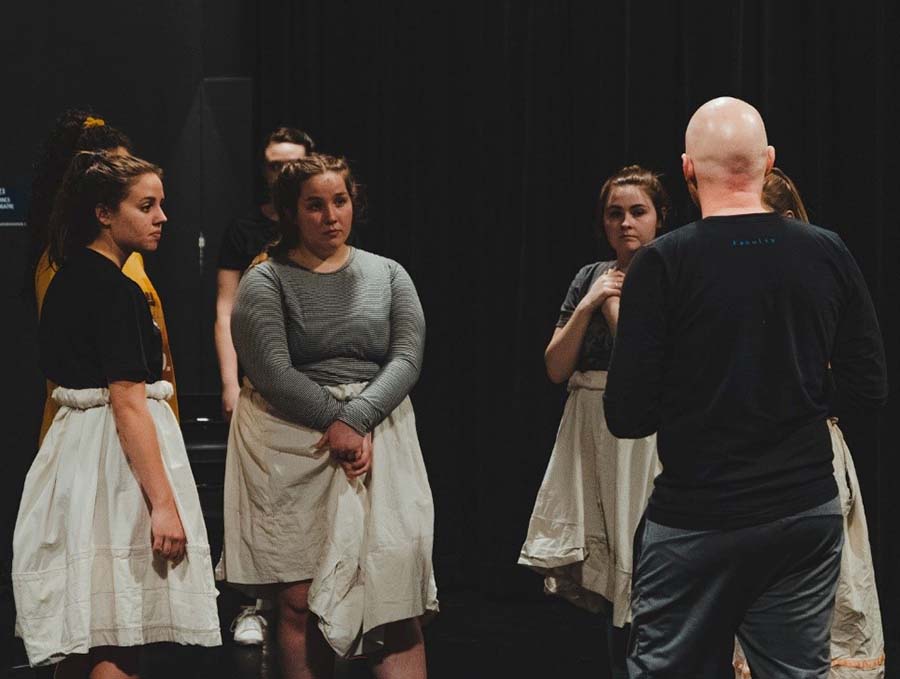 School of the Arts’ #ArtAt6Feet series: ‘We can get through it’

Mid-March, the University of Nevada, Reno ended all campus operations and transitioned to online learning in response to the COVID-19 pandemic. This has resulted in both change and challenges for some students. The School of the Arts- #ArtAt6Feet campaign is sharing the stories of students majoring in the visual and performing arts, and their transition to online learning during this time. This article is part of a five-part installment about the impact of alternative campus operations and social distancing on students in the School of the Arts.

Since the start of spring semester, Abby Rosen has been on the go. However, a drastic University change would soon shift this busy senior’s schedule, lifestyle and way of education.

Normally, Rosen – a musical theater and dance major – wakes up at 7:30 a.m. and heads to the University of Nevada, Reno campus to attend her dance class. She then goes to a voice lesson, meets with an advisor and socializes with friends. In the afternoons, Rosen can be seen heading to another dance class, a Shakespeare class and then back home where she refreshes and refuels to prepare for her four-hour Spring Awakening rehearsal. Once all her activities are completed, Rosen typically gets home at 11 p.m., catches up on any additional work and then heads to bed to rest and repeat everything the next day.

This semester, Rosen’s active schedule only lasted two months. In March, the University announced their shift to online learning in response to the COVID-19 pandemic. This transition to virtual learning along with the closure of campus resulted in many challenges, disappointments and changes for Rosen, as she now tries to fill her much slower days at home with video meetings, classes,and dance practices in her living room.

“I think I’m doing well at shifting and getting my work done, but I feel like I’m doing it kicking and screaming in a way I don’t want to because it’s not what my vision is, and it feels unfair in a way,” Rosen said.

The closure of the University and state shutdown also meant canceling all of the on-campus events for the remainder of the semester. This resulted in disappointment for Rosen as she was cast as Martha Bessel, one of the main characters in the Department of Theater and Dance’s Spring Awakening play.

“Since I wasn’t involved in any scenes classes, that was my integrated, involved, hands-on learning experience,” said Rosen.

However, despite this upset, Rosen says that the most challenging part of adapting to virtual learning is not having the energy, input or feedback from her peers and fellow performing artists – an environment that always had her feeling inspired.

“It is really hard to be your most creative and productive self when everything around you has changed… when a lot of your resources and your typical day has changed,” Rosen said, who also realized that not having the ability to share her work in-person with her theater and dance community has been harder than she anticipated.

“I think that I expected myself to have a seamless transition since I use technology so much, but I underestimated the power of human contact,” Rosen said.

Yet, through all the challenges Rosen has faced so far, she has noted a surprise benefit in her Shakespeare class, something that would not have even been considered had it not been for the transition to virtual learning.

“We actually have a really cool opportunity to have something be on camera and do acting for camera as an assignment, as opposed to what would’ve been a performance in class,” Rosen said.

Students in this theater class were originally instructed to perform a monologue in a heightened style and submit a video of it as an assignment. This type of performance style is unnatural and involves exaggerated physicality and vocal choices, unlike the realistic Hollywood style of acting that we normally see on television or in movies.

However, the heightened style of acting does not translate well on camera. With this in mind, the professor was inspired at the thought of students having the ability to curate a real scene at home and asked the class to submit the monologue in a realistic style as it performs well on camera.

Not only did this new version of the assignment bring about a different way of acting, but also a chance for students to practice video techniques and production for assignment submissions.

Although she misses her friends, professors and live performances, Rosen advises that other students who are coping with this new platform of learning take the time to take care of their mental health and well-being.

“Work will always be there and if you need to take the time to give yourself a break, you should take the time because you can’t expect yourself to be a productive, inspired and creative artist for 24 hours of the day,” Rosen said.

She also hopes that everyone is taking care of themselves and staying connected to the people they care about and the work they love to do.

“Even though this is a really hard thing, we can get through it and stay connected as much as possible,” Rosen said.