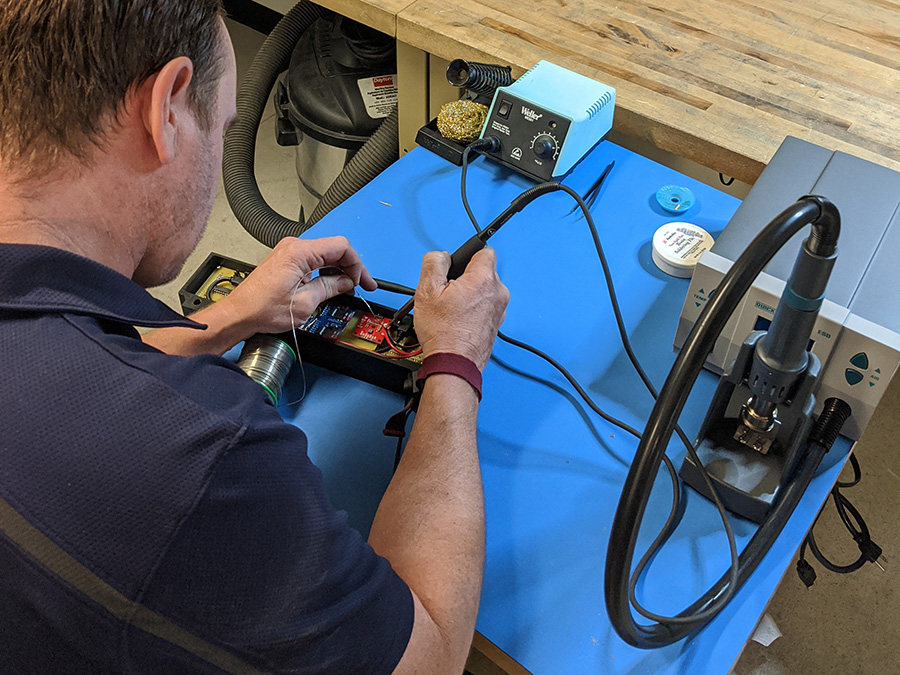 Earthquake damaged buildings, bridges and other critical infrastructure may be evaluated more quickly for safety and response options following an event with new optical sensor technology and software that is being developed and field tested by the University of Nevada, Reno and the Lawrence Berkeley National Laboratory.

Development is continuing with $240,000 in new funding from the Department of Energy’s Office of Nuclear Safety. Prototypes of the laser-based sensor were deployed last year. The new grant will advance the design of the new optically based technique for direct measurement of interstory drift – displacement between floors of a building – in two directions. Interstory drift is a fundamental measure of building deformation used in multiple ways to assess building performance

“The current sensor and wireless network design was completed here in our earthquake lab,” said David McCallen, professor and director of the Earthquake Engineering Lab in the College of Engineering and also a senior scientist in the Energy Geosciences Division at the Berkeley Lab. “This technology can transform the ability to assess damage and rapidly respond to earthquakes. We are pushing towards broad application of this new technology.”

The system is designed to provide an unprecedented ability to rapidly determine a facility’s integrity after a major earthquake and enable and expedite informed response decisions and efforts related to safety assessment, repair and reoccupancy of buildings following a major earthquake.

Field testing has been underway at the Lawrence Berkeley National Lab with continuous operation since September 2019 in a multi-story building that sits about two city blocks from the active Hayward Fault, considered one of the most dangerous faults in the United States. The sensors are capable of capturing the building response to frequently occurring small magnitude earthquakes. Proprietary software allows the engineers to check the sensors, download data and set recording levels from their new sensor lab remotely from the University of Nevada, Reno Earthquake Engineering Laboratory complex.

The sensor system will also be installed this summer on a northern Nevada bridge overpass to further validate the viability of the technology.

“The deployment is an active, living testbed for us which is crucial to validating field performance,” McCallen, who leads the research collaboration, said. “Prototype sensor measurements demonstrated excellent drift measurement. Enhanced accuracy of the current advanced version of the sensor allows drift measurements within just 0.5 millimeters so that small amplitude ambient vibrations of a building systems can also be made for use in building computer model validation and structural health monitoring.”

The system will provide the DOE with the unprecedented ability to determine the operational capability of critical facilities immediately after an earthquake from any offsite location and enable informed time-critical decisions.

The new generation of optical sensor is being designed, built and will be tested at the University of Nevada, Reno’s Earthquake Engineering Lab. The first prototypes were tested in the world-renowned lab on their 14- by 14-foot hydraulically driven shake tables that created realistic computer-driven earthquake motions on structural systems of increasing complexity.

The instrument, known as a Discrete Diode Position Sensor, includes a microprocessor and 92 low-cost laser-sensitive diodes to measure the precise location of the incident laser. Other components of the system are a compact, low-power laser generator, backup power systems, removable data storage and RF communications.

“Previous sensor generations were quite a bit larger than the system we are now able to deploy,” McCallen said. “With incorporation of design features based on lessons-learned from previous generations of the system, it’s now a quarter of the size of our original sensor design.

The system projects laser light and senses the position where the light strikes a detector, measuring structural drift. Making use of a geometric array of the small, light-sensitive photodiodes, the sensor is able to instantly track the position of the laser beam.

Patrick Laplace, Earthquake Engineering Lab Manager noted “The developed sensor package utilizes advances in microprocessors and wireless communications to make many of the past challenges of sensor system design much more achievable on both a time and cost effective scale. The sensor system has been developed with full integration into the emerging Internet of Things (IOT) in mind.”

Statistical modeling of the experiments conducted with the Berkeley Lab will also lead to more accurate modeling of the data to help in planning and design of buildings, bridges and other critical infrastructure.

Floriana Petrone, a civil engineering faculty member said that "Smart Infrastructure” is becoming an unavoidable paradigm in civil engineering applications. Incorporating in structures a capability to self-monitor and self-report creates the opportunity to achieve self-diagnosing structures, enables time-critical decision making on a data-informed basis, and reduces maintenance costs. The current sensor and wireless network represent an example of how the smart infrastructure paradigm can be translated into a deployment-ready technology that opens new windows to structural health monitoring and damage detection applications.

From the University of Nevada, Reno’s College of Engineering, collaborators on the project include Professor David McCallen; Assistant Professor Floriana Petrone; Research Associate Patrick Laplace; and technical staff Chad Lyttle and Todd Lyttle in the fabrication and deployment of the GENIII sensors of at the Center for Civil Engineering Earthquake Research Laboratory. Collaborators from Lawrence Berkeley National Laboratory include Connie Lin and Bill Wright of Laboratory Operations in the deployment and field testing of sensors.