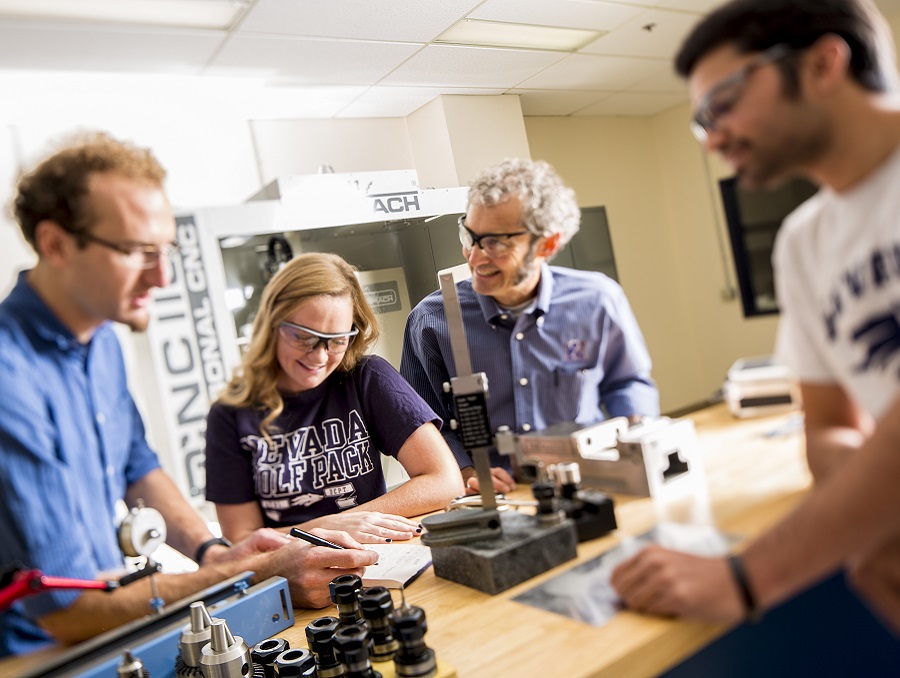 The effort to reach the prestigious Carnegie Classification for Community Engagement – which the University learned officially it had achieved Friday – was a reflection not only of how the institution has matured in recent years, but how it has creatively and successfully met the new expectations of a growing community and state.

Just as northern Nevada and the state has seen its demographic and economic profile change dramatically over the past five years, the University’s effort to meet those changing needs has changed – through increased collaboration with community and statewide partners, significant co-curricular growth that has seen record student involvement in the community through civic engagement, and the maturation of the delivery of services and expertise of faculty, students and staff through cutting-edge initiatives in areas such as healthcare.

Friday’s announcement that the University’s application to the Carnegie Foundation for the Advancement of Teaching had been successful means that the University for the first time in its history belongs to one of the most important classifications in all of higher education.

The Carnegie Foundation awarded 119 institutions with the “Carnegie Engaged” classification this year for the 2020 cycle. UNLV also received word on Friday that it had also attained the honor. Both Nevada universities join 240 schools that earned the distinction during the 2015 selection process.

"The Board of Regents commends Nevada's two universities for meeting the nation's highest standard for community engagement," Jason Geddes, chair of the Nevada System of Higher Education Board of Regents, said. "Strong public universities contribute in so many ways to building vibrant, resilient communities, and we're proud to see the remarkable positive impact that our universities are making throughout Nevada."

“It took an extraordinary level of commitment by the people of our institution to reach this milestone,” Johnson said. “Time and again when there have been needs, our people have found collaborative solutions that have profoundly impacted the quality of life of the citizens in every county throughout the state.

“Added to our classification as an R1 research institution, we now have two highly coveted classifications that speak to the high quality of work at our University.”

The Carnegie Engaged application highlighted numerous ways that the University has shown commitment to and demonstration of being community engaged, including collaborating with the community and state at large to enrich scholarship, research and creative activity, enhance curriculum, teaching and learning, and in addressing critical societal issues.

Provost Kevin Carman said the attainment of the Carnegie Engaged classification is reflective of how the University in a much broader sense is fulfilling its mission as a land-grant institution.

“It indicates that we’re fulfilling a fundamental component of our charge as a land-grant university,” Carman said. “The University’s strategic plan focuses on our tripartite mission of Learning, Discovery and Engagement.

“Our U.S. News & World Report Tier 1 designation reflects our stature as a university that is committed to student learning and success. The R1 designation that we received from the Carnegie Foundation last year reflects our success and national reputation in research and discovery. The Carnegie Engaged classification illustrates that we are also among the nation’s leading universities in engaging with the needs of the citizens of Nevada. I believe that this recognition illustrates our maturation and national recognition as a complete university.”

One of the areas in the application where this type of maturation was evident involved the key role the University’s students are playing through civic engagement initiatives that are having a profound impact on the community.

The work of the Center for Student Engagement was among the successes highlighted in the Carnegie application. The Associated Students of the University of Nevada Administration/Center for Student Engagement works collaboratively with ASUN and the Division of Student Services to engage, educate and empower undergraduate students. In 2017, the Center for Student Engagement implemented “GivePulse,” an online network for students and community engagement partners. In 2017, 219 community partners benefitted from more than 40,000 hours of service provided via the Office of Service-Learning and Engagement. Student volunteerism has reached outside campus in the form of involvement with community healthcare efforts such as High Sierra Area Health Education Center to on campus with the Pack Provisions Pantry, an effort to support all members the University with needed daily resources.

“The Center for Student Engagement prioritizes involvement by providing students the information and tools necessary to serve on many levels,” said Anthony Martinez, president of ASUN. “The Center for Student Engagement is home to the Associated Students of the University of Nevada, as well as other departments such as civic learning/democratic engagement groups and student media groups.

“These communities are targeted specifically to campus involvement. However, the Center for Student Engagement also promotes community volunteerism through the ‘GivePulse’ platform, which showcases many opportunities for students to be involved in our local community. This is something very important to us, as we are a land-grant University wanting to deepen our relationship with the community.”

Martinez said the ethic of volunteerism that runs through the student body speaks to the type of people the university graduates and sends into the world each year – empathetic and intellectually curious individuals who yearn to make the communities in which they live better places for all. Through programming, co-curricular initiatives and connections that students first find on campus, they discover a lifelong path of volunteerism, civic engagement and involvement, Martinez said.

“Community involvement is something that is deeply rooted in our student ‘culture,” Martinez said. “I believe it is the essence of our learning community, whose sole purpose is to develop servant-hearted individuals for our world. It is our goal, as student leaders, to provide the resources and support necessary to keep this culture alive.

“In addition to having a conducive learning community, our students are also living in a generation where change and progress is needed more than ever. Young people are the most powerful generation; we are creative, innovative, and connected, making involvement highly accessible.”

In addition to the impact of students, the application touched on partnerships and collaborations with the community that have made a difference in a variety of areas. In all, 15 community engagement partnerships were profiled in the Carnegie application. They ran the gamut from workforce development, providing healthcare for Reno’s marginalized populations, developing regional economic resilience, improving Nevada’s transportation infrastructure, aligning the University’s master planning process with that of the City of Reno and regional partners, building a more tech-focused economy and collaborating in fulfilling the mission of public K-12 education in Washoe County.

The process of pinpointing these partnerships as well as compiling dozens of other engagement initiatives and key data that spoke to University expertise in meeting community and state needs was challenging, yet rewarding said Russell Stone, assistant vice provost of University Assessment & Accreditation. It was Stone’s task, working in concert with individuals such as Brenda Freeman, professor in the College of Education, Fred Holman, vice provost for Extended Studies and Community Engagement, and Jane Tors, director of research communications as well as numerous committees, to compile, edit and finalize the application.

Just a sampling of programs and data within the report included:

As powerful as those examples and data are, it was the unearthing of smaller, yet just as impactful, stories of the University’s engagement that really struck a chord with Stone.

“It became a process of how many stories we could feasibly uncover in the time we had to complete the application,” Stone said. “As it turned out, we were able to uncover so many. Over the final six months, as the drafts of the application went out to our various groups, it turned out to be an embarrassment of riches.”

Stone recalled that in the final days before the April 2018 submission deadline, programs and success stories were still being added. At one point, the balancing act of what to leave in and how to exhaustively answer each of the application’s questions within precise 500-word limits saw the kitchen table in Stone’s home completely overflowing with 10 different drafts of the application. In the end, the application, which took about 15 months total to finish, checked in at 89 pages.

“It’s just an extraordinary validation of our engagement efforts,” Stone said. “It speaks volumes to the contributions of our students, faculty, staff and administration.”

Carman said the group charged with compiling the application did a superb job. Like the best storytellers, he said the team wove a compelling narrative of community engagement by the University’s faculty, students and staff throughout the application.

“We worked on the application for the better part of a year and a few individuals, including Russell Stone, Brenda Freeman, Fred Holman and Jane Tors, deserve special recognition for their tireless work in preparing the application on behalf of the University,” Carman said. “We received the Engaged designation because of the excellent application that highlighted the extraordinarily powerful and diverse ways that our University is truly serving the needs of our local community as well as communities and programs throughout the state of Nevada.”

Now that the designation has been achieved, in many ways, the work is only beginning for the University. Another application, highlighting even more work in engagement that will need to be done, awaits the University in less than six years.

Perhaps that’s the whole point of the designation. Engagement, like so many other aspects of the University’s role, is ever-changing and constantly evolving, with new needs and expectations always on the horizon. The effort by the University to meet those needs must never cease.

“While we are very pleased to celebrate this honor,” Carman said, “we fully recognize that excellence is a pursuit and not a destination. Onward and upward.”