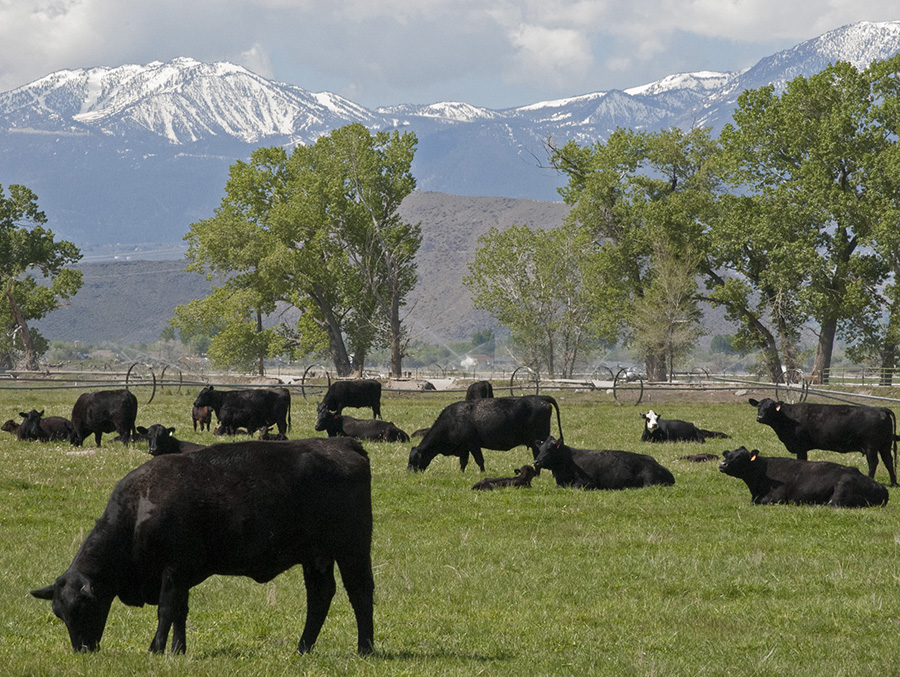 A team of scientists at the University of Nevada, Reno are investigating how cattle microRNAs and the genes they influence affect the human body and health. MicroRNAs are small RNA molecules involved in the regulation of gene expression that convert DNA code into proteins that carry out cellular functions, such as development, differentiation, growth and metabolism.

The interdisciplinary team of researchers is seeking to understand how feeding cattle different diets will affect the microRNA profile in beef; how microRNAs may be used as biomarkers for meat quality; and how these small molecules may affect human health, specifically chronic diseases.

In cooked and digested beef, the team will identify microRNAs that may be absorbed by the intestines and further regulate pathways associated to cancer, coronary artery disease, apoptosis of cardiac cells, repression of breast cancer, inflammatory diseases and diabetes.

“This nutritional value relationship to elements of meat has never before done in Nevada,” Amilton de Mello, a veterinarian and assistant professor of meat science and food safety in the College of Agriculture, Biotechnology & Natural Resources, said. “We’re looking at grass fed versus grain fed – and their nutritional values. We’re not looking at vitamins and minerals, but at a molecular level, small nucleotides, part of our DNA and how much from the animal goes to our genes.”

The team, including three graduate students, will also look for biomarkers for meat tenderness when comparing grain-fed versus grass-fed cattle and map all the variables.

“We’re also looking for what modulates sensory traits like flavor and tenderness,” de Mello said. “So we’re looking for microRNAs for tenderness and will silence the gene so it doesn’t let the meat get tough.”

The team is led by de Mello. He said this work, evaluating the interactions between genomics and nutrition, is part of a new branch of science called nutrigenomics. Nutritional values of foods are commonly related to carbohydrate, fat, protein, mineral and vitamin content. But in this approach, they are looking at how microRNAs of cattle may affect human health.

“This is the first project done here in Nevada where we’ve fed animals and analyzed growth performance, meat quality and nutritional values at a molecular level,” he said. “We’re marrying our agriculture and nutrition programs, and bringing in bioinformatics and molecular medicine, looking at the nutritional value relationship to the elements of meat.”

As part of the project led by animal scientist and Assistant Professor of Agriculture Mozart Fonseca, the team remodeled the Main Station Field Laboratory feedlot to meet the needs of the research, adding gates, electronic water troughs, a weather station, new fences, panels on fences to minimize wind and a shade structure for the animals. The 750-acre Field Lab in east Reno is part of the College’s Experiment Station. Among other things, it is home to 520 cattle, of which 24 are being used in this study. All 24 cattle were pasture fed, and then as their 110-day finishing diet, 12 were grass fed and 12 were corn fed.

“First, we want to know if feeding corn or grass will increase the expression of microRNAs that silence genes that are antagonists to tenderness and fat deposition, affecting meat quality,” de Mello said. “Second, we will identify the microRNAs from each type of beef – corn fed or grass fed – that are in high quantities after being digested. This will allow us to also then compare the beef microRNA profiles to other diets that do not contain animal protein. Our goal is to first understand what beef-derived microRNAs can promote at the small intestine level and then compare that with plant-based protein diets, for example.”

The three-pronged research – animal growth performance, meat quality and the functional role of beef microRNAs in humans – will focus on identifying microRNAs in both fresh and digested beef. The microRNA profile in fresh beef will allow the team to identify biomarkers associated with the expression of genes relevant to their research.

While Fonseca is responsible for conducting the animal feeding trials at the Main Station Field Lab and for calculations for statistical and mathematical modelling, de Mello and Bradley Ferguson, in the College’s nutrition department, will identify the microRNAs in digested beef that may be associated with human diseases and possibly absorbed by the human intestines after cooking and digestion. De Mello is also responsible for evaluating quality parameters of the meat and identifying the microRNAs and genes of interest that modulate genes affecting tenderness and intramuscular fat deposition. Tong Zhou, from the University’s School of Medicine, will develop models evaluating which microRNAs can silence specific genes.

Ultimately, their project will identify what animal diet affects the expression or suppression of desirable microRNAs from a human nutrition standpoint, and hypothesize nutrigenomic effects on human health.

The work began in January 2020 and will run through the end of 2021, and is funded by the College’s Experiment Station and Hatch Act funds.