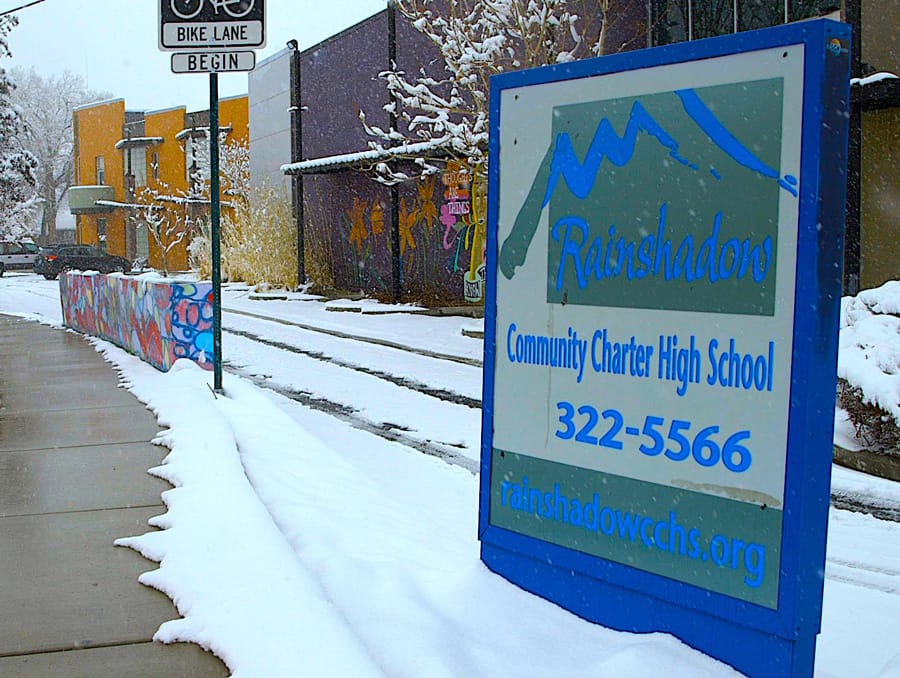 Are there other ways to measure school success than testing and numbers? This question and having a student in Nevada’s public school system were the personal motivation behind Kari Barber’s documentary “Rainshadow.” Barber won the Railroad Pass Best Nevada Filmmaker award for her documentary short at the Dam Short Film Festival in Boulder City on February 16, 2020.

The film’s subject was a Nevada high school that helped many at-risk students called Rainshadow Community Charter High School. Barber, a Reynolds School of Journalism associate professor of electronic media and an award-winning documentarian, first heard about the high school in connection to positive stories about students attending and turning their lives around.

“I was kind of aware that the school was a place that a lot of students who had had trouble at other schools ended up finding a home and finding purpose and meaning,” she said.

Yet, in 2015, Rainshadow showed up on a list of failing schools due to its low test scores and graduation rates, causing the state of Nevada to threaten to take it over. “It was one of the schools in the newspaper that made the list of failing schools, which sort of surprised me because [from] what I had seen, it seemed really successful.”

This disconnect between anecdotal success and state-declared failure led Barber to film the school for a semester. Her film followed the art teacher, Erik Holland, and principal, Toby Wiedenmayer, as they worked to save Rainshadow from being shut down for financial reasons.

During the film, Wiendenmayer and students appealed to the Washoe County School District, allowing the school to stay open. Since filming, Rainshadow became enCompass Academy and moved to a new location, inside the Boys and Girls Club of Truckee Meadows.

The film was produced in collaboration with the Reynolds Media Lab, an umbrella production center at the Reynolds School. Barber directed the film, videography support was provided by Reynolds School lecturer Nico Colombant and the rest of the work was done by students.

“This is the first film I’ve produced with Reynolds School students instead of professionals. I think it’s really a testament to the quality of our students too that the film won this award. Plus, it was fun to get to produce something together.”

Fast-forward to 2019, Barber completed her film and submitted it to the Dam Short Film Festival. It was selected in 2020.

Known as the largest film festival in the state, the multi-day event annually screens short films from a variety of genres ranging from documentary to sci-fi and horror to animation. Just being accepted into the festival was a win for Barber.

“I was really interested in this festival and getting in was already an honor since they’re such a selective festival,” she said, adding that her film’s premiere was attended by about 300 people.

Receiving the Nevada filmmaker award was the crowning accomplishment of an already successful weekend. The award decision was based on audience vote.

“I was already really excited about [the full house],” Barber said. “So that was really an honor to know that the film must have resonated with a lot of people.”

Barber has produced multiple documentary films, including "Struggle & Hope," which aired first nationally on PBS in February 2019. Many of her films have focused on the theme of social justice, encouraging audiences to open up about difficult topics and communicate with individuals who have varying ideas.

“I think my goal is just to get people to be open to communicating, understanding and listening to people who they might otherwise think are different from them.”

With “Rainshadow,” Barber had two goals, submit the film to several film festivals and hold a screening discussion in Reno. Her film will be shown at the Carson City International Film Weekend on February 27, the Nevada Women's Film Festival in Las Vegas on March 21 and the Show Me Justice Film Festival in Missouri in April.

Along with attending those film festivals, Barber plans to hold an event for people with different viewpoints to watch the film and talk with each other afterward about how to improve education. “I feel like it's a great discussion piece. And so that's what I really want to do is hold some kind of screening discussion.”

Overall, Barber hopes “Rainshadow” will work as a means to open dialogues about improving the standing of Nevada education.