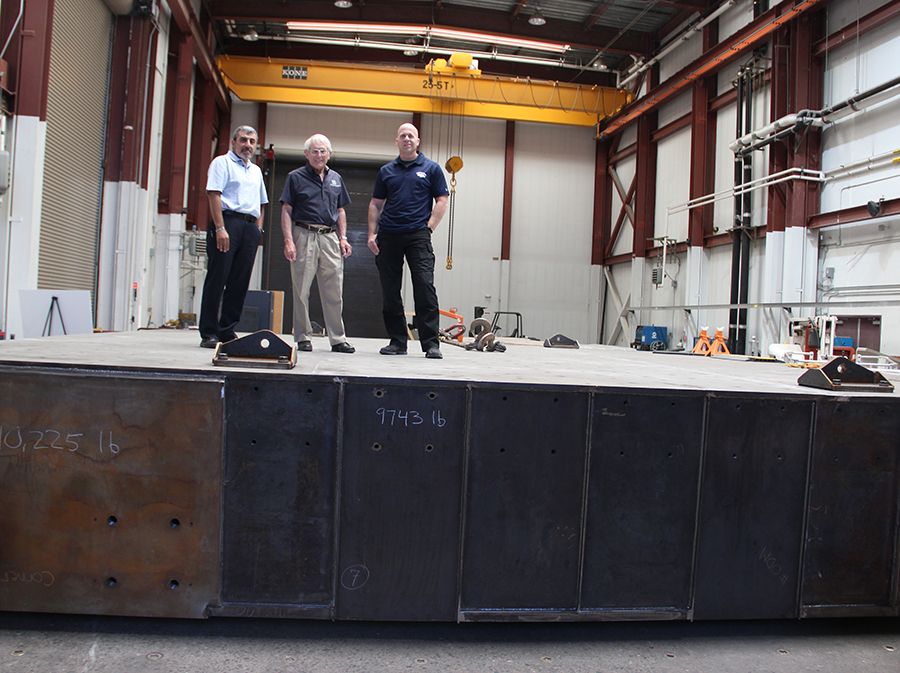 Research engineers at the University of Nevada, Reno’s world-renowned earthquake engineering lab are getting ready to shake up a million pounds of steel and sand.

Construction is underway on one of the world’s largest laminar soil boxes and its dedicated shake table– with a capacity of more than 500 tons (one million pounds) – to examine the seismic safety of nuclear facilities and systems in this multi-year, multi-million dollar, federally-funded project.

This mega-sized facility will be able to simulate the ground motions from earthquakes using eight, computer-controlled, hydraulically-driven rams that will shake the soil box and any structure sitting on its surface or embedded in the soil. This research will study, at a scale not previously possible, the influence of soil type on building behavior during earthquakes.

A fundamental purpose of this new experimental capability will be to provide the experimental data necessary to assess the realism and accuracy of a new advanced computer code for modeling the earthquake response of nuclear facilities.

In the 35-year tradition of the Earthquake Engineering Lab, the new project is breaking the mold for earthquake engineering technology. Not content to settle on the same old methods and equipment for research, the research team is bringing innovation and experimentation to the table. Using custom innovative, pioneering designs and materials, Patrick Laplace, research associate professor and earthquake lab manager designed the shake table, while Research Associate Professor Sherif Elfass designed the soil box.

The 24- by 24-foot steel tabletop, known as a platen to the researchers, is a flat platform built on top of an open grid of steel plate girders that looks something like an egg crate. This is done to keep the platen light and stiff. It sits on eight hydrostatic bearings mounted to the floor of the Large-Scale Structures Laboratory.

The soil box that is mounted on the platen is a laminar box comprising 19 layers, each one supported on bearings attached to the layer below. These bearings allow the layers (laminates) to move over each other during an earthquake to replicate what happens under a real building, just like a slinky spring. But these bearings are the Achilles Heel of large soil boxes and UNR researchers decided to create a better mousetrap, to build a system of bearings that would be reliable and resilient during strong shaking. They decided to use a set of custom-designed, purpose-built, rubber (elastomeric) bearings manufactured here Reno.

“Other large soil boxes in Japan and China use mechanical bearings – slide or roller bearings – between the layers of the box, but many have been damaged during strong shaking and need repair.” Ian Buckle, the University’s Principal Investigator for the project, said. “We wanted a tougher, more durable solution so we designed, developed and tested a number of prototype rubber bearings. We’ve found, from our work protecting bridges from earthquakes, that rubber bearings can be extremely tough. But using them in the walls of a laminar soil box has never been tried before, as far as we know. They are an outlier in the soil box world.”

Another outlier in this project is the soil box shape. Rather than square or circular, Buckle and team decided on an octagon. With a square box it’s not so easy to compact soil in the corners, and a circular shape is more likely to twist about its vertical axis during shaking. “We think an octagonal shape is a good comprise for it has no corners and is less likely to have undesirable modes of vibration. Time will tell.” says Buckle.

The fabrication of the major components of the table/box is completed and the box system is ready for assembly. 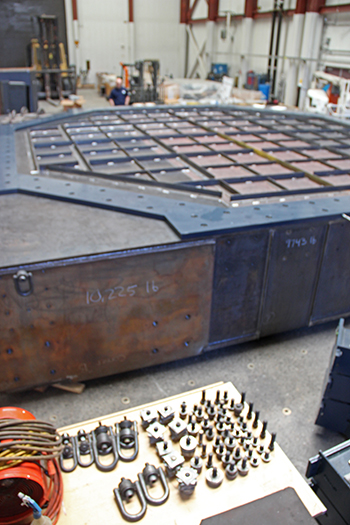 Driving the shake table are eight large hydraulic actuators set at 45 degree angles to the north-south axis of the table (four at each end of the table). In this way the table can be moved in the north-south and east-west directions simultaneously exciting the soil in a biaxial mode, as in a real earthquake.

“The design of the box, from the layered walls with rubber bearings to its shape and innovative materials, is intended to be invisible to the soil and not constrain it in any way from deforming as it wishes during an earthquake. On the other hand, the box must be strong enough to keep the soil on the table, and thus a compromise is required. It is a delicate balance between stiffness and flexibility. After endless computer simulations using 10 different earthquake ground motions we think we have the optimal design. Time will tell.”

“Experiments on soil/structure interaction are usually conducted in geotechnical centrifuges, which use an artificial gravity field to model the soil properties correctly. But because centrifuge buckets are relatively small, any structures embedded in the soil are at very small scale (1/20 - 1/40). And the results for these structures are not always credible. On the other hand we can work at a much larger structural scale (1/10 – 1/5) if we use a shake table and soil box. But in this case the soil properties are not well represented unless we use a very big box. And this is the logic for building as big-a-box as we can afford.”

The new shake table and massive soil box is located in the Rogers-Weiner Large-Scale Structures Laboratory. This high-bay lab, with its 30-foot-high ceiling, houses the 24- by 24-foot table and box, which has a total height (table and box) of about 25 feet.

The $6.2 million grant to the University of Nevada, Reno from the U.S. Department of Energy for the project was awarded for the design and construction of the soil box and its shake table over five years. This is expected to be followed by a three-year experimental program to study soil-structure interaction and validate the numerical computer codes for predicting the interaction between large buildings and their underlying soils. The new codes are being developed by researchers at the University of California, Davis, who are collaborators in this project.

The DOE’s Lawrence Berkeley National Laboratory in Berkeley, California is the overall project leader and the integrator of the all the project development elements for the DOE. The overall objective of this collaborative multi-year project, “Seismic Safety of Nuclear Facilities,” is to develop advanced computational tools for modeling and simulating the earthquake response of nuclear facilities, including the effects of nonlinear soil-structure-interaction.

The current method for evaluating this interaction is with numerical modeling in a computer and small scale experiments in a geotechnical centrifuge. This project will enable a quantum advance in the scale at which these experiments can be conducted giving greater confidence in the accuracy of the numerical models.