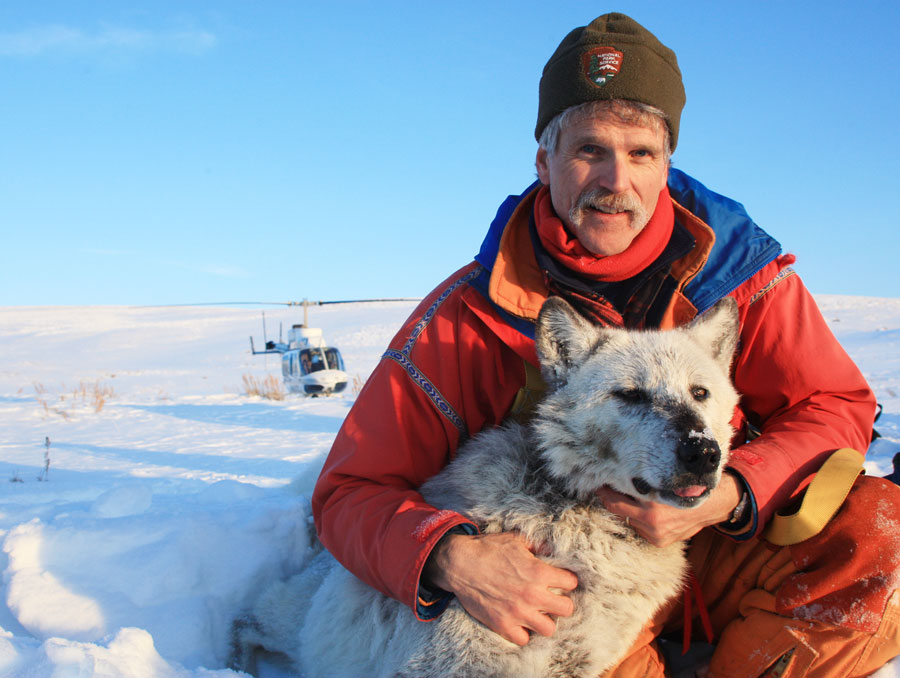 Each year, the College of Science honors exceptional alumni of both the College of Science and the Mackay School of Earth Sciences and Engineering at the Alumni of the Year event. Always an impressive group, this year’s alums were no exception. From the cardiologist advancing education in the field of heart failure and transplantation to an ecologist working tirelessly to protect the gray wolf in Yellowstone, this year’s group of alumni are the leaders in their incredibly diverse set of fields and research. The awarded alumni, featured below, serve as an inspiration to our current students and as a testament to the value of our faculty.

Johnson graduated from UNR with a Ph.D. in Chemical Physics in 2007, with the added distinction, of having one of the highest scores any Chemical Physics Ph.D. student has attained on the written comprehensive examination to date. In 2011, one of his many publications was  selected  by  The Journal of Chemical Physics for its  80th anniversary special issue, which republished 80  of the most seminal papers published in the journal over its first 80 years. In 2009, about a year after joining Sterling College, he was granted a scholarship to the Telluride Summer School on Theoretical Chemistry in Telluride, Colorado. He assisted on a Pinhead Punk Science event that is hosted by the Pinhead Institute, a Smithsonian affiliate in Telluride that, among other activities, organizes events to engage children in Science. In 2013, Dr. Agbo joined the Chemistry Department at Coastal Carolina University, and in 2018, he was granted tenure and promoted to Associate Professor.

After graduating with a Bachelor’s in Psychology in 2012, Jena Casas earned a Master’s degree in Criminal Justice and is currently enrolled in the clinical psychology doctoral program at UNR. Ms. Casas works tirelessly to reduce the treatment-provider gap in Northern Nevada by increasing access to behavioral health services for individuals who are Spanish-speaking and economically disadvantaged—she does this via her work as a clinician and by actively participating in securing funding for survivors of domestic violence, sexual assault, and childhood abuse. She has also immersed herself in the development of patient educational tools to reduce stigma related barriers to treatment-seeking for Latina survivors of domestic violence and sexual assault. Most recently, Ms. Casas was involved in securing funding to develop a multifaceted approach to child abuse prevention. She has authored nine peer-reviewed publications, five book chapters, and 10 manuscripts that are under review. She has utilized her background in psychology to improve the lives of northern Nevadans via the delivery of clinical services to disadvantaged populations.

Ms. Haarala completed her BS degree in Mining Engineering in 2005. Upon completion of her degree, Ms. Haarala started as an Underground Mine Engineer with Queenstake Resources and moved to a role as a Project Engineer with Barrick Gold Corporation in 2006. She also had the opportunity to work at an underground gold mine in New Zealand for two years. For close to 10 years (2009-2018), Ms. Haarala worked with Newmont in different capacities, including Senior Underground Mine Engineer. She has continued her life-long learning experience through important certificate courses and SME registered membership. She has been actively involved in our professional society national and section level activities. She was the Vice-Chair and Chair of the Northeastern Nevada SME Section in two consecutive years, i.e., 2017 and 2018. She has presented papers and chaired technical sessions at SME annual conferences on numerous occasions. In recognition of her many contributions, SME recognized her with the national level award of M&E Division’s Outstanding Young Professional Award in 2018.

Dr. LeMond began her career at UNR in Fall of 2000 as a first batch Millennium Scholar. Through the next four years, she received a dual Bachelor’s Degrees in Biology and Biochemistry with a minor in Chemistry.  During her time as an undergraduate, she worked in a chemistry research group doing her Biochemistry senior thesis research on the formation of potentially bio-compatible ultra-hard carbon nitride thin films. This research won her the Eli Lilly Travel Award, which enabled her to attend a National American Chemical Society Meeting to present results from her research. Dr. LeMond attended the University Of Nevada School Of Medicine, and upon graduation in 2008, she went on to an internship/residency at the University Of Colorado Hospital in Internal Medicine. From there, she obtained a cardiology fellowship at the Oregon Health and Science University in Portland, Oregon. After this initial fellowship, she secured an advanced fellowship at the University of Colorado Hospital in Aurora, Colorado in the area of Advanced Heart Failure. In the Fall of 2016, Dr. LeMond became a practicing cardiologist at the Mayo Clinic, specializing in heart failure and transplantation. She is currently an Assistant Professor and Senior Associate Consultant and also in the process of getting an ACGME (Accreditation Council for Graduate Medical Education) accredited Advanced Heart Failure fellowship approved for the Arizona Mayo clinic, and is on track to have the first fellow start in 2020. Once it is approved, she will become the Associate Program Director, and in 2021, she will be promoted to Program Director.

Michael Stewart received his Bachelor of Science degree in 1993 (along with a “dual” Bachelor of Arts in Political Science), followed by his Master of Science in Geography degree in 2000. During his graduate program, Michael worked as a graduate assistant for research on water policy and local government in the Western US. He worked on surveys, interviews, and data analysis relating to water issues facing local elected officials in eight western states. Michael is currently the Director of the Research Division for Nevada’s Legislative Counsel Bureau (LCB). He has worked at LCB for 23 years, during which time he worked directly with 11 different legislative committees focused on everything from natural resources to transportation to government affairs, elections, and legislative ethics. Michael oversees a staff of 45 that includes professional policy staff, a Constituent Services Unit, a Research Library, a Publications Unit, a GIS Analyst, and numerous support staff. Michael has distinguished himself through his professional accomplishments and serves as an inspiration to university faculty, staff, students, and alumni.

Doug Smith earned his Ph.D in biology from the University of Nevada, Reno in 1997, and is currently the project leader for the Yellowstone Gray Wolf Restoration Project in Yellowstone National Park. Doug has published numerous papers on both the wolf and the beaver. His passion for wildlife has led his entire career, including studying wolves on Isle Royal in 1979, and also in Minnesota in 1983 prior to studding the gray wolf in Yellowstone in 1997.

Mark Evatz graduated from the University of Nevada, Reno in 1988 with a Bachelor of Science degree in 1988 in Mining Engineering and received his Masters of Business Administration in 1999. In addition, he received his Professional Engineering Registration in Nevada in 1994.  After graduation, Mr. Evatz began his career at the distinguished Newmont Mining Corporation. During his tenure there, he served in multiple capacities that included: mine engineering, environmental engineering, operations management, deposit modeling, project management, and underground coal mining. He was also tasked with leading a team and running a $500 million business unit. After 27 years with the Newmont Mining Corporation, Mark recently decided to retire. He remains an avid fan of Wolfpack football and basketball, as well as a valued friend and supporter of the Mackay School of Earth Sciences and Engineering.

Dr. David C. Houpt graduated with a Bachelor of Science degree in 1985 in biology. After his time at UNR, he was accepted and attended Oregon Health and Science University where he earned his Doctorate of Dental Medicine. Following the completion of his degree, he joined the United States Navy, serving as a Corpsman. He additionally served as a triage officer in the United States Marine Corp. During his service, he completed rotations in oral diagnostics, endodontics, periodontics, and oral surgery. He finished six years of study, abroad and at home, and was honorably discharged after serving at the Naval Submarine Base Bangor. He decided to settle down and start his own practice in Silverdale, WA and has been there ever since. He has served as a delegate to the Washington State Dental Association and president of the Kitsap Dental Society. He has also used his study of Forensic Odontology to assist in solving major murder cases. Additionally, Dr. Houpt was recognized by the Washington Oral Health Foundation for providing reduced feel dental care to those most in need. Dr. Houpt was a Dentaly Quality Assurance Commission finalist, currently serving in a pro-tem status while awaiting approval from the Governor of Washington State.

Dale Fraser received his Bachelor of Science degree in Geological Engineering from the Mackay School of Earth Sciences and Engineering in 1959. Directly after his graduation, Mr. Fraser elected to serve his country, and joined the United States Army, serving as a missile officer on active duty from 1959-1961. Dale progressed in his career and became an engineer and superintendent at the Nevada Test Site (NTS), a site dedicated to the nation’s nuclear weapons testing and other defense programs. He left the NTS after five years and was employed as a project engineer on several hydroelectric and water tunnel projects in California. In 1970, Dale decided to return to the NTS, and its operating contractor, Reynolds Electrical & Engineering Co., Inc. (REECo). After working as a project manager, and other subsequent upper-level management positions, Mr. Fraser was promoted to President & General Manager of REECo and Vice President of the parent corporation, EG&G, Inc. in 1986. REECo was a company of approximately 5,500 employees at that time. He worked at this capacity for ten years before electing to retire in 1996. Dale has served on many boards to include the Associated General Contractors of Las Vegas, United Way of Southern Nevada, UNLV College of Engineering Advisory Board, and the Nevada Test Site Historical Foundation Board. Mr. Fraser has also continued to support his alma mater by serving on the UNR Mackay Executive Advisory Board.