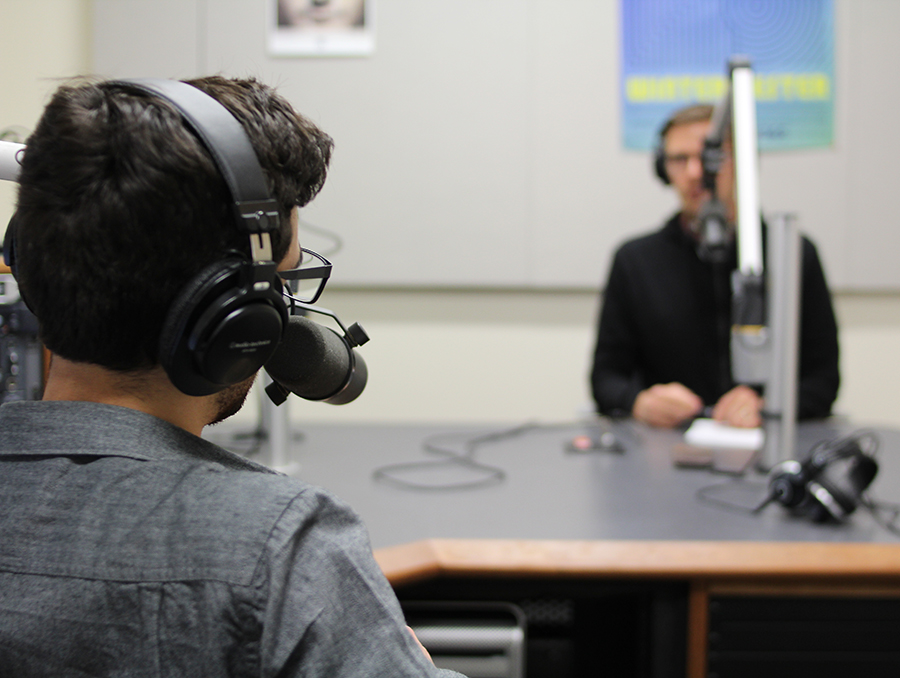 The podcasting industry is at an all-time high. For the first time among the U.S. population of people 12 and older, the number of people who have listened to a podcast surpassed 50% (Edison Research). The Reynolds School of Journalism (RSJ) is advancing the potential careers of student journalists wanting to tap into this new form of media.

"Podcasting is both very intimate, very cutting edge and very documentary," said Reynolds School Lecturer of Digital Media and Cross-Cultural Reporting Nico Colombant. "A lot of students get most of their news from podcasts nowadays, rather than other sources. It's a very on-the-go medium. You can find so much in podcasting; it really appeals to a generation that uses their phones primarily as their source of information and entertainment."

Colombant teaches Journalism 425, a media production class at the RSJ where he gives students the freedom to explore podcasting.

"This class, when it started several years ago, I'm not sure there were really any other classes in the U.S. that were specifically meant for podcasting," Colombant said. "It is an opportunity for [students] to really test out and grow their podcasting skills within the classroom environment."

"I try to make it very realistic, where the students can work on their passion project, but at the same time realize, eventually, if you want to monetize your podcast, you also have to work hard."

Since Colombant's first class, he has always tried to incorporate professional podcasters.

"Our first Skype guest for the class was Ira Glass, who’s called the godfather of podcasting [and] who was behind ‘This American Life.’ He skyped into the class and gave direct feedback to students."

Just recently, Colombant held an event that featured popular local podcasters like Mignon Fogarty from “Grammar Girl- Quick and Dirty Tips” and Rory Dowd from “The Worst Little Podcast in the World.” The panel discussed the future of podcasting and emphasized the importance of storytelling and aunthenticity to students.

Fogarty spoke about her love for podcasting.

"What I still love deep down about podcasting is that anyone can do it. You have access to the same platforms we have. If you want to put good out into the world or education into the world, you can do that."

"Keep with it. You have this opportunity to be pioneers."

One of the RSJ students that attended the event, Faith Thomas, is beginning to build a career in podcasting. She credited Colombant's class.

"If you're looking to get into podcasting, Nico's class is a good start."

Thomas is a senior journalism student. She hopes to get one of her podcasts picked up by WNYC, a public radio station in New York City, once she graduates.

"I fell in love with podcasting last year," Thomas said. "Every time I’m in the studio I feel at home; it feels natural to me; it feels like it's second nature and I love that."

Thomas started two podcasts, one named "EthnoQueers" which explores ethnic issues, queer issues and how they can collide, and "The Drag Diaries" where Thomas interviews drag queens, particularly those of color, and asks them about their experiences.

"If you have a vision, don't stop; actually sit down and do it," Thomas said. "If you feel like your something to say is important to the world, share that; do it."

Thomas advises students who are looking to start a podcast to simply start.

"It’s so easy to get started," Thomas said. "You just have to take the first step which is the hardest."