A cappella group Backtrack performs at the University of Nevada, Reno 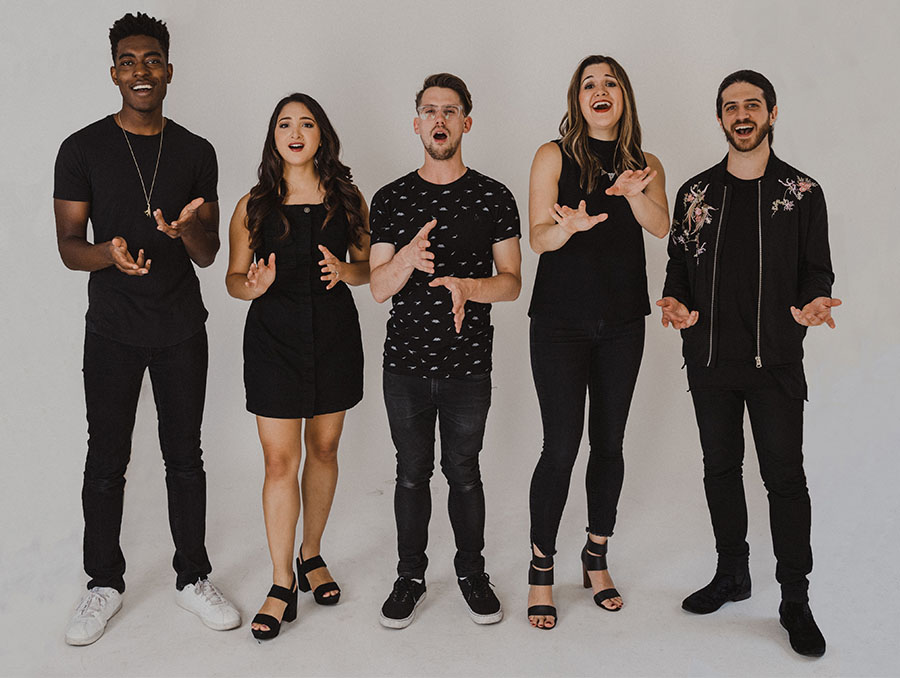 A cappella group Backtrack performs at the University of Nevada, Reno

Backtrack, the a cappella YouTube sensation, will perform for audiences of all ages during their visit to Reno Oct. 17-18. The featured performance will take place on Oct. 17 in Nightingale Concert Hall at the University of Nevada, Reno, as part of the School of the Arts’ 59th Performing Arts Series season.

The New York-based pop vocal group got its start on YouTube. The group now has over 10 million views of their video mashups of hits by Sia, The Chainsmokers, Ariana Grande, Pitbull, The Beatles, Stevie Wonder, Michael Jackson and even Beethoven. Backtrack is a rising force in music competitions after winning “New York’s Got Talent! Season 6” last April and Steve Harvey’s 2017 "Sing Off" on the nationally televised “Steve” show. The group has appeared on PopTV & Scary Mommy’s "Lullaby League" hosted by “Parks and Recreation” star, Jim O’Heir, and the group performed in Broadway's “Kinky Boots.”

Backtrack’s visit to Reno will begin by engaging some of the community’s youngest audience members at a family-friendly Story Time at the Spanish Springs Library at 10:30 a.m. Oct. 17. Located at 7100-A Pyramid Highway in Sparks, this event is free, and families with children of all ages are encouraged to attend. That evening, at 7:30 p.m., Backtrack will perform for audience members in Nightingale Concert Hall as part of the Performing Arts Series. During the 90-minute set, the pop vocal group will skillfully traverse genres including Motown, pop, and classical, while demonstrating impressive vocals and beatboxing genius. On Oct. 18, Backtrack will perform for about 300 students at Reed High School and Glenn Duncan Stem Academy. The group is passionate about promoting the arts and helping students find and develop their own voices.

Backtrack’s public performance and associated events are part of the University of Nevada, Reno School of the Arts 2019-2020 Performing Arts Series season, which includes five shows by distinguished contemporary performers. On Nov.7, Take3, a dynamic trio presenting classical and contemporary music will take the stage as the third performance of this season’s lineup. The Series continues on Feb. 27, 2020, with Martha Redbone’s performance of “Bone Hill: The Concert,” and concludes with the Austin, Texas-based bluegrass group, Steel Betty on March 12, 2020.

To purchase tickets for the Performing Arts Series, call Lawlor Events Center Ticket Office at (775) 784-4444, visit unr.edu/pas (convenience fees apply for online and phone purchases), or purchase in person at either Lawlor Events Center Ticket Office (open 10 a.m.-  p.m. Monday-Friday at 1550 N. Virginia St., Reno, lower level) or at the Church Fine Arts Box Office beginning one hour before performances. Orders received less than 10 business days before the date of the performance will be held at the Church Fine Arts Box Office for pick up.

In addition to the Performing Arts Series, the School of the Arts also presents the Reno Jazz Festival and Lake Tahoe Music Camp as well as world-class visual art exhibitions, musical performances, theatre productions, dance concerts and public arts events presented by the art, music, and theatre and dance departments. The school’s degree programs provide a strong foundation in a range of artistic disciplines, enabling students to contribute as artists, educators and scholars at the local level and beyond. Finally, the School, as well as the College of Liberal Arts, encourages broad campus and community participation in the arts through its numerous performances, lectures, exhibitions, core courses and outreach activities that explore diverse cultures and encourage lifelong learning.

The 2019-20 Performing Arts Series is funded in part by the Nevada Arts Council, a state agency; the National Endowment for the Arts, a federal agency; the City of Reno; WESTAF (the Western States Arts Federation); Western Arts Alliance Advancing Indigenous Performance Touring Fund and the Andrew W. Mellon Foundation; IGT; the Associated Students of the University of Nevada, and the Graduate Student Association. In-kind support is provided by Circus Circus Hotel Casino, THE ROW – Reno, The Jesse Hotel & Bar, and CLM Design, Advertising, Interactive.

New program aims to raise interest and opportunities in neuroscience research for individuals who are typically underrepresented in the field.