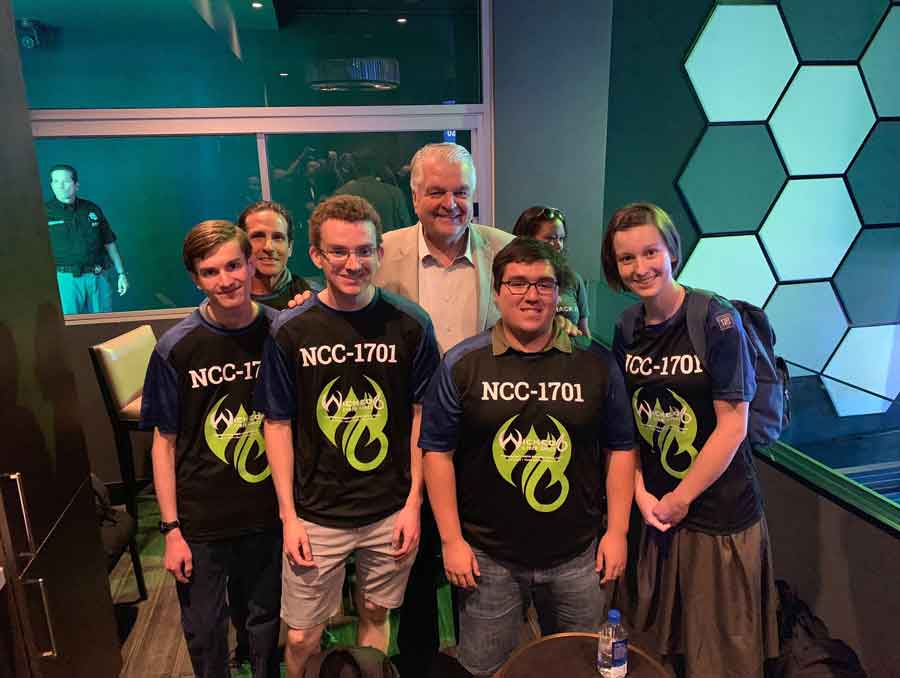 After winning the national championship in the Spring National Cyber League competition, the Nevada Cyber Club continued their winning ways in the inaugural Wicked 6 Cyber Competition.

Twenty-one college and university teams entered the competition, and the Nevada Cyber Club was one of six teams to advance to the live final rounds in Las Vegas on August 8. These final rounds of the competition featured a distinctive esport format and were held in the Luxor eSports arena.

The final six teams received celebrity treatment. They assembled in the "green room" before the competition, and when each team was called to the stage they came through the Hype Tunnel, designed to build excitement, then down the stairs to the stage. Once the competition started, the audience was able to view every team member's screen as they worked to solve the security challenges.

Despite a strong showing, the team did not advance to the final group of three, but they said they found the Wicked 6 to be a great experience.

"I think my favorite thing was certainly the aesthetic of the whole thing, definitely including the Hype Tunnel,” said team member Jamie Poston. “It really felt like we were esports gamers, and it really made the whole event much more exciting, and made me a whole lot more nervous.”

Ignacio Astaburuaga said that the Hype Tunnel and the effort that was put into the event were awesome, and it made him feel like a gamer.

“It was great to see lots of people support cyber,” Astaburuaga said. “It made the experience much more real and intense.”

The team also made valuable connections in the cybersecurity community.

"I enjoyed getting to meet other competitors their coaches,” said team captain Bryson Lingenfelter. “It was cool to learn about what they've been doing with their cyber clubs. I also think offline events are a great way of showing the club that what we do is ‘real,’ and something a lot of people care about. I'm still not sold on cyber competitions as an esport but it was sort of surreal to see so many people in such a fancy arena taking us seriously."

Executives from several large tech companies including Microsoft and Uber were also in attendance and spent time talking with team members about current industry trends and career opportunities.

"I enjoyed meeting and talking with industry there. The Microsoft incident response team member talked about some cool stuff and showed us some really good resources to look into and use," said team member Ian Grant.

The team also met with Governor Sisolak, who congratulated them on their work.

For more information about the program and its events, the Nevada Cyber Club will be one of 200 organizations at the ASUN Club Fair on Thursday, August 29, from 4 to 7 pm on the Quad.