A desire to support the community leads to a career change 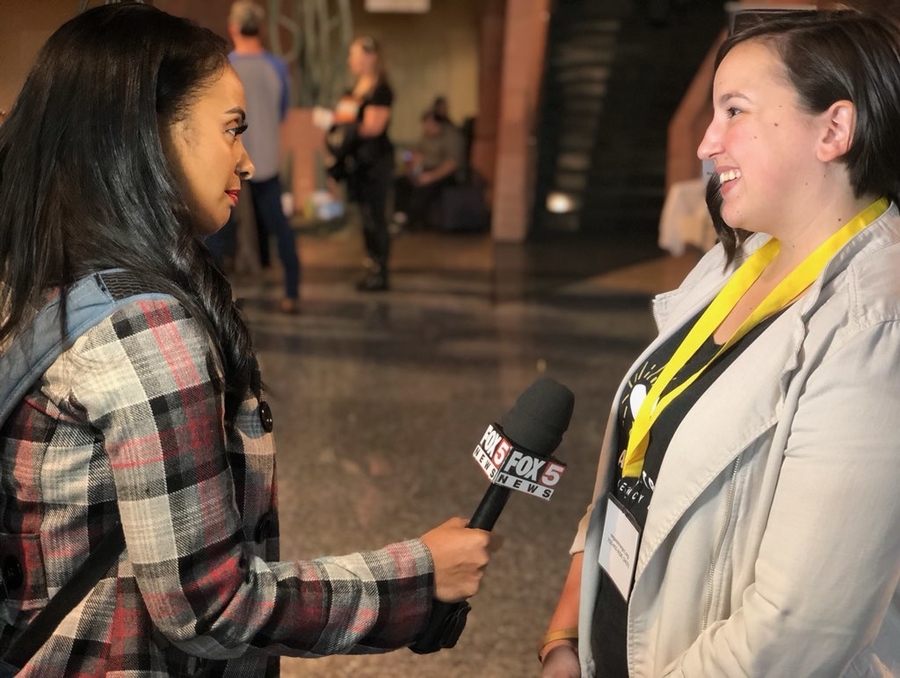 A desire to support the community leads to a career change

As a Nevada native from Winnemucca,  Reynolds School of Journalism (RSJ) alumna Misha Ray recalled the night of the October 1, 2017, shooting (also known as 1 October).

“I remember exactly where I was and what I was doing around 10:15 p.m. when police cars from Henderson and Boulder City started racing past my third-story apartment window,” Ray said. “I woke up around 5:30 or 6 a.m. to concerned text messages. Confused, I checked media reports again. The numbers were staggering: Hundreds injured, more than 50 killed. I have chills even now; I didn’t know what to do.”

At the time, Ray worked at The Mob Museum but decided to leave in early 2018 to give herself more time to focus on law school.

In early 2019 she saw a marketing and outreach role at the Vegas Strong Resiliency Center and felt compelled to apply.

“To work for the Resiliency Center, which is the resource and referral center for survivors and victims of the 1 October shooting, it felt like something I had to do.”

Ray’s role at the Vegas Strong Resiliency Center is to reach those affected by the shooting through social media groups and other outlets to provide them resources offered by the center.

“Our center is also the go-to for media when it comes to stories about 1 October or survivor recovery, so I do a lot of media relations with the help of our wonderful agency, R&R Partners,” Ray said. “Overall, it is an important position that I’m honored to have.”

Along with her position at the Vegas Strong Resiliency Center, Ray is now halfway done with law school and shared her future plans.

“I was recently chosen to be a student representative on Nevada’s new Board on Indigent Defense Services. I’m excited about the project, and it’s entirely possible I continue working in that area after law school,” said Ray. “I love my rural roots and would love to keep those roots alive and well. However, based on my experience, I also know to keep an open mind to career paths I may not have otherwise considered.”

Ray gives credit to her experience as an undergraduate student in the Reynolds School for her expansive career.

“I did seven internships when I was a j-school student, and I absolutely credit those internships with the start of my career,” Ray said. “The emphasis the school puts on the power and importance of internships was really impactful for me.”

Ray graduated shortly after the recession in 2012 but with seven internships under her belt and skills she learned from classes, she was able to get a job after graduation.

“Given that I eventually went into digital marketing, the classes I took where we had to create blogs and learn video editing was very beneficial and very practical,” Ray said. “I value practicality, and I can’t say I would be where I am now without those skills.”

After college, Ray accepted a job in internal communications with Microsoft before moving to Las Vegas and becoming the digital marketing manager for The Mob Museum.

Ray shared her uncertainty of wanting to pursue digital marketing.

“When I was at the RSJ, I studied in the PR track, and I was convinced that’s what I wanted to do. However, once I started practicing, I realized PR was not a perfect fit for me,” Ray said. “I skeptically took a job in social media when I started at The Mob Museum, thinking I wasn’t a good fit for that arm of marketing/communications. To my absolute surprise, I ended up loving it.”

With all of her experiences in life, Ray gave advice to students looking to working in in-house communications after graduating.

“My two biggest pieces of advice are to do research and ask questions. These two pieces of advice do not apply just to job interviews or internships, they apply to everything in life,” Ray said. “Being informed is critical and will help avoid unnecessary headaches in life.”