Long-form journalism from inside a camper van 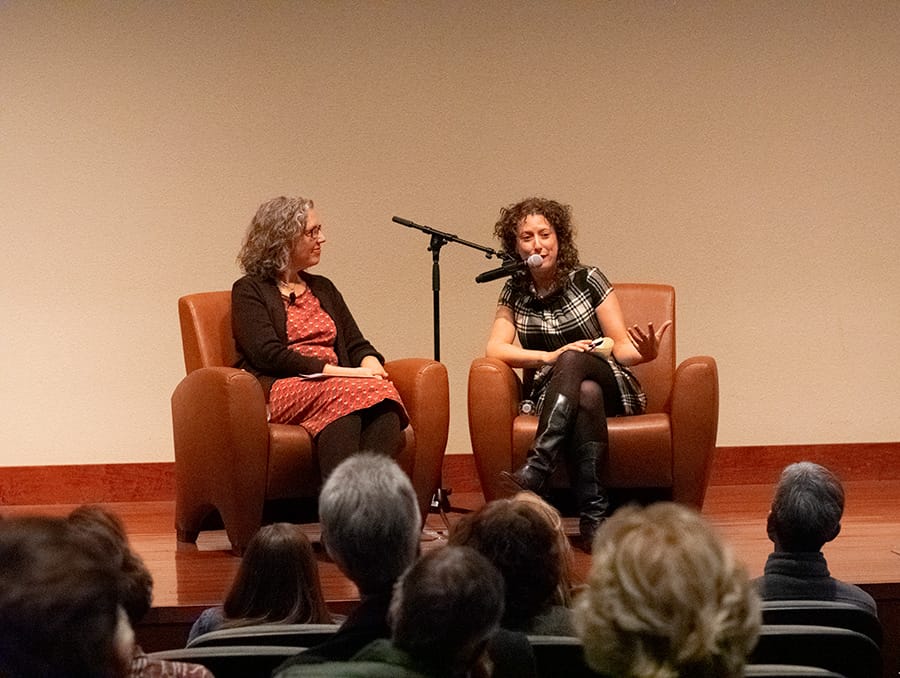 Long-form journalism from inside a camper van

Nearly 100 people were in attendance at “A Conversation with Jessica Bruder” on Nov. 18, 2019, in the Wells Fargo Auditorium of the Mathewson-IGT Knowledge Center. The event, hosted by the Reynolds School of Journalism in partnership with Nevada Humanities, recognized Jessica Bruder, an award-winning author and journalist, as the 2019 Robert Laxalt Distinguished Writer.

The Robert Laxalt Distinguished Writer Award was established in 2001 to honor the Nevada author and inspire a new generation of writers and journalists. Robert Laxalt received international critical acclaim for his work, writing 17 books and numerous national magazine articles.

Bruder is the author of two books, “Nomadland: Surviving America in the 21st Century” and “Burning Book: A Visual History of Burning Man.” She teaches narrative storytelling at Columbia Journalism School and has contributed to the New York Times for more than a decade.

"Nomadland" was named a New York Times Notable Book and Editors’ Choice, along with the 2017 Discover award, and was a finalist for the J. Anthony Lukas Prize and the Helen Bernstein Book award. It is currently being made into a motion picture by Fox Searchlight.

At the evening event, Reynolds School Associate Dean Donica Mensing sat with Bruder to discuss how she discovered and reported on the story in “Nomadland.” Bruder spent months in a camper van she named Van Halen, following older Americans as they moved around the country from one low-paying job to the next.

“I walked into it backwards as I do many things in my life,” Bruder said, adding that she met a woman living in an RV, which led to a Google search in which she found jobs targeted at older Americans that actually were more difficult than the companies promoting them claimed.

What first started as a magazine article later turned into her award-winning book.

“I met all of these amazing people and it was a kind of thing where I came away with way more questions than answers. I was fascinated,” Bruder said.

Mensing also asked Bruder how she met the book’s main character Linda May. Bruder had traveled to Courtside, Arizona, for her story, and Linda May was the last person she interviewed before planning to leave.

“I met Linda May because somebody told me she worked at CamperForce and also because she had a spaniel that resembles my dog,” she said. “And one of the coolest things about her, whenever you spend much time with somebody, you watch what they say to you and you watch what they say to other people and some people change, right? ... Linda was just Linda. Linda was Linda with me. Linda was Linda with other people and Linda was pretty secure in who she was and where she’d been.”

Mensing brought up Bruder’s advocacy for slow journalism in a world of 24-hour news, asking, “Why do you think you are going against the tide?”

“I think so much of our culture right now is hurry up, hurry up,” Bruder said. “I've done a lot of short form. I always come away with questions, and I also tell my students, ‘Try to write the kind of stuff you'd actually want to read.’”

As the conversation continued, Bruder shared her experience going undercover at Amazon’s CamperForce and in the sugar beet fields. She then took questions from the audience, addressing topics like income inequality, the questions she still had after writing her book and what she learned about the experience for people of color while on the road.