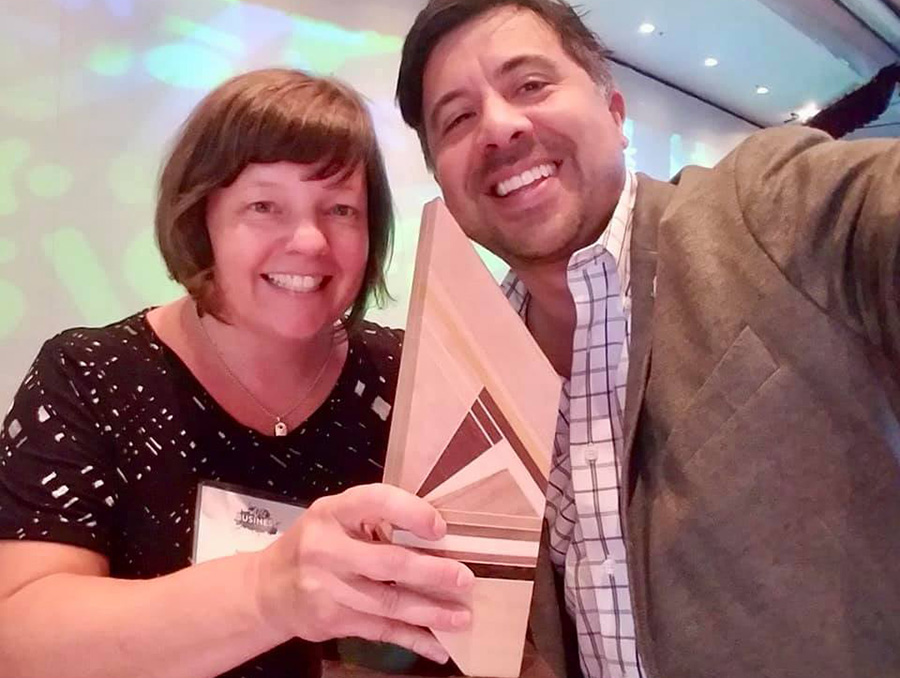 “I was at the awards luncheon when I learned that I won the award. There were several finalists in the microenterprise category. I recognized them as successful, established businesses. When the announcer called my name, I was quite surprised and honored,” Kris Vagner said.

Vagner is a recent 2019 alumna of the Reynolds School of Journalism’s graduate program.

“It’s a year and a half long program, but balancing kids and graduate school, I took the nontraditional route,” Vagner said. “I’m glad I did the graduate program there; it’s been a lot of fun.”

While creating the publication, Vagner was still enrolled at the Reynolds School.

“It was such a great environment to be in when I was developing Double Scoop.”

Vagner gave credit to the well-informed professors who had technical and logistical skills to help her plan and start the media outlet.

“Everybody I worked with was great. In particular, I collaborated with several undergraduates who had great skills, and I don’t know where I’d be without them.”

Double Scoop is a media outlet that reports on the arts in Nevada. Art in Nevada is growing, especially in Reno, with an increase of people from bigger cities moving to town and events such as the Burning Man festival nearby.

“I think it’s important to have conversations about the arts that are accessible to everyone and not just the insiders,” Vagner said. “We need people discussing issues of artists who aren’t beholden to a marketing voice. They need to be discussed honestly and fairly, and that’s something we can do because we are not beholden to any corporate decree.”

Vagner shared one of her favorite stories published in Double Scoop about a book on an artist named Michael Heizer, known for giant land art pieces. The book “Michael Heizer: The Once and Future Monuments,” written by William Fox, was unique because it contained no personal interviews with Heizer. Double Scoop was the very first publication to cover the book nationally and internationally in a Q&A with Fox.

Another unique story published in Double Scoop is the story of one Reno artist who thought about leaving the city because he could not find an audience to admire conceptual sculptures that discuss immigration and Latinx issues.

“These are topics that everyone knows about but doesn't necessarily talk about, and I am proud of both of these authors,” Vagner says. “Double Scoop has the freedom and flexibility to do things other newspapers don’t, and I’m pleased with this.”

Since winning the EDAWN award, Vagner shared that Double Scoop has gained more followers because of the public recognition.

“It was nice to have the recognition. On a personal level, it put wind in my sails to know the business community appreciates what we do,” she said.

With business growing, Vagner hopes to take Double Scoop to a higher level.

“I want to cover a wide range of people and activities, in hopes of covering all of visual arts.”