University of Nevada, Reno Assistant Professor Elizabeth Koebele from the Political Science Department and her team have been awarded a $1.5 million National Science Foundation Grant. The grant will allow Koebele and her co-investigators to research urban water systems for the next four-and-a-half years.

“We are interested in what drives urban water utilities to transition toward more sustainable practices,” Koebele said. “Urban water utilities are unique because they have to be flexible and adapt yearly to large snowmelts or droughts. However, climate change and population growth are pushing us into a new state where we will face greater extremes. So, we’re looking at how utilities adapt their water management practices to climate change, population growth and urbanization.”

Koebele began working on this line of research while she was in graduate school, where she met her other team members at conferences. They were interested in taking an interdisciplinary approach to understand urban water systems, so they applied for, and were awarded, a SESYNC grant of $42,000. During that project, they studied urban water systems in Las Vegas, Nevada; Miami, Florida; and Los Angeles, California. To understand transitions in these systems, Koebele and her team developed a model that integrates information about the physical water system and the surrounding political environment. They published two papers from their initial research findings, including a forthcoming article in Global Environmental Change. 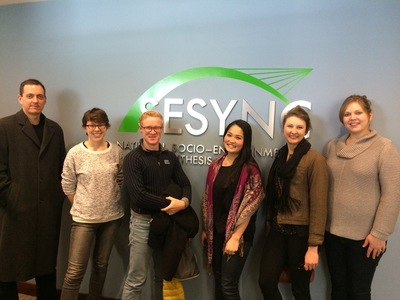 Koebele, second from right, and her SESYNC research team, Current team members, Aaron Deslatte and Margaret Garcia, are on the left.

“When other cities heard about our work, they showed a lot of interest,” Koebele said. “They asked us to help them understand their city’s history and how they might be able to become more resilient and sustainable. We also rely a lot on our partnerships with cities that allow us to access their data. They’re heavily involved in the process, and hopefully we are able to provide them models that will help them think about their water planning in the future.”

The current project will focus on 12 cities, which will be determined by several factors including water sources, such as ground water and surface water, and political structure of the city. The team will seek to understand past transitions toward sustainability in these cities and model how certain factors that are generalizable across cities may drive or stall transitions.

“In the initial cases, we found that water stress alone doesn’t actually foster a transition at the utility level,” Koebele said. “The utility needs to experience water stress, but there also has to be public and political push for change. A combination of these factors helps the utility overcome various barriers, like financial and political costs, and move forward with more sustainable practices.”

Koebele’s $338,000 portion of the grant, titled Transition Dynamics in Integrated Urban Water Systems, will help her hire a post-doctoral researcher and a graduate student research assistant to work on the project, as well as allow her to travel to collect data and present her findings at conferences.

“My specific role is qualitative data collection, such as interviewing urban water managers to understand their experiences and help them become part of the project,” Koebele said. “I will also measure of the public salience of water issues across cities by collecting and analyzing news media. In the past, we did a lot of the analysis by hand, but now we’re going to create an automated coding process because it’s so time-intensive to mine through all of the media data.”

The current team includes three people from the initial team and two new scholars. In addition to Koebele, the team consists of Margaret Garcia and John (Marty) Anderies from Arizona State University, George Hornberger from Vanderbilt University, and Aaron Deslatte from Indiana University.

“It’s very cool to see a big national funder support interdisciplinary work and put money toward understanding social and political motivators of change in large-scale systems,” Koebele said. “It’s also exceptionally rewarding and exciting to be able to continue the work that I started as a graduate student.”