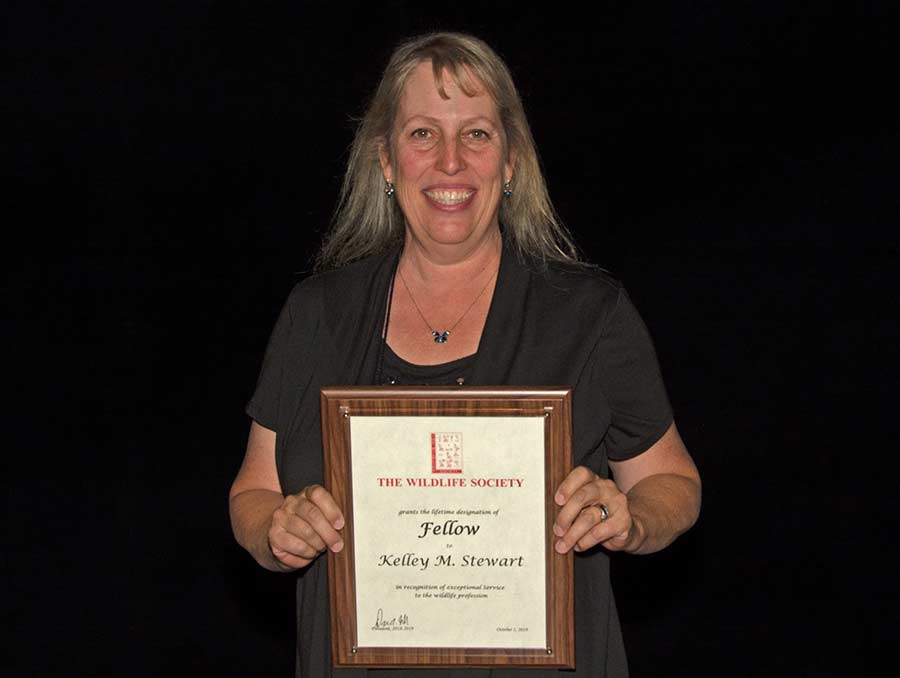 This award is presented to individuals who have shown notable service and outreach efforts to the society for at least 10 years, and Stewart was one of only 10 members nationally to receive this award in 2019.

Since first joining the student chapter of The Wildlife Society at University of California, Davis as an undergraduate, Stewart has held multiple positions in the society, including chair of committees at the national level, president of the Nevada Chapter and Nevada Chapter Representative to the Western Section. She was recently elected to The Wildlife Society Council as the representative of the Western Section, which includes Nevada, California and Hawaii. As a representative, Stewart is striving to make sure the interests of Nevada are being presented within this section. These interests include work on the management of large mammal populations and the conservation of ecosystem services.

Stewart’s work in outreach was also a contributing factor in her receiving the award. Her efforts with the board of the Nevada Chapter have included events such as a science symposium put on by the Nevada Chapter, where the University was also represented. During the two-day symposium, managers and students addressed multiple topics, including issues in wildlife conservation.

“I would encourage students to join the student and Nevada chapters,” Stewart said. “I believe in the Society, especially their goals and mission, and it’s a great venue for professionals to be able to contact one another and discuss pressing issues in the field.”

Stewart’s recent work with the Society included a “Conservation Conversation,” which invited the community to a discussion about human diversity in the wildlife profession. From there, she and her colleagues, led by Brian Wakeling, published a paper in The Wildlife Professional addressing greater presence for underrepresented groups in the profession.

“Dr. Stewart has, for many years, dedicated tremendous effort to The Wildlife Society, and the Society has benefitted tremendously from her leadership at all levels of organization,” said Kevin Shoemaker, assistant professor at the University and president of The Wildlife Society Nevada Chapter. “In 2018, the Nevada Chapter was named ‘Chapter of the Year,’ and Dr. Stewart deserves much of the credit for our recent productivity and success. I am hard pressed to think of any individual more deserving of honors from any professional society than her.”

Going forward, Stewart plans to continue her work with The Wildlife Society alongside her research in population ecology of large mammals as part of the College’s Experiment Station.