Incubating jobs, energy and the future economy in downtown Reno

With a new director and nearly 200 jobs created, the University of Nevada, Reno Innevation Center—Powered By Switch looks ahead 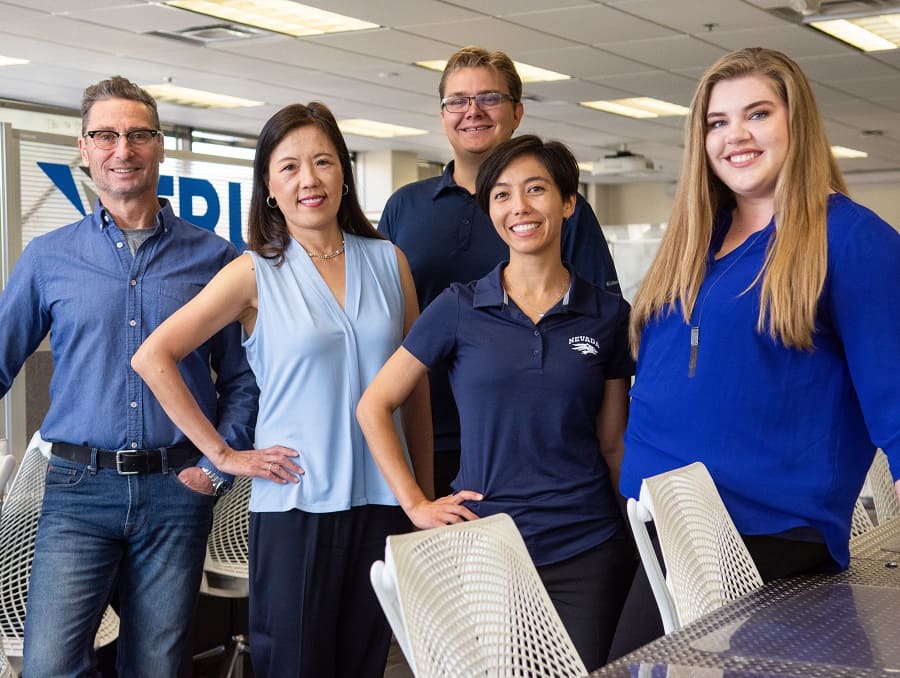 Incubating jobs, energy and the future economy in downtown Reno

With a new director and nearly 200 jobs created, the University of Nevada, Reno Innevation Center—Powered By Switch looks ahead

It's been nearly four years since a packed room of guests celebrated the opening of the University of Nevada, Reno Innevation Center-Powered By Switch. As forecast, it has become a foundational hub to the region's innovation ecosystem and economic vibrancy. An estimated 195 jobs have been created by companies based in the Innevation Center and venture-funded companies at the Innevation Center have raised more than $55 million.

There is an energy about the Innevation Center which, after all, was named to take the "no" out of innovation. It is a collaborative, co-working environment empowering Nevada's next generation of technology and businesses by providing access to mentorship, investors, interns, office and meeting space, and a well-equipped Makerspace. The Innevation Center has more than 200 members, including community members, University faculty and students and more than 75 organizations or businesses.

"When you think about it, the Innevation Center is a startup venture itself," said Mridul Gautam, University vice president for research and innovation. "It is a synergistic, responsive, flexible and collaborative environment, with a leadership team that has been and remains willing to learn and adapt."

The Hub and the Router

"One of the strengths of Reno is that people can become connected quickly," Chou, who stepped into the director role on Aug. 19, 2019, said. "The Innevation Center is the connective tissue for the regional ecosystem. We're the hub and we're the router."

The Innevation Center hosts the InNEVator pre-accelerator program and the Reynolds School of Journalism Podcast Center, and is home to Nevada Industry Excellence. Several organizations focused on developing, mentoring and connecting businesses base all or some of their efforts in the Innevation Center, including StartUpNV, Entrepreneurs Assembly, SCORE Mentors Northern Nevada and 1 Million Cups. The Innevation Center regularly collaborates with GOED and the Economic Development Authority of Western Nevada (EDAWN), and investor groups such as the Sierra Angels and Watershed Growth Ventures are often on site.

"We are very much connected to the community, to economic development and to the entrepreneurial service organizations," Chou said.

There are connections to campus too. Many students and faculty members use the space as they develop business ideas. Students also connect through internships and employment, and some faculty have incorporated the Makerspace into classes. The Innevation Center coordinates often with the University's Nevada Career Studio. For industry and entrepreneurs, the Innevation Center joins with the University's Nevada Center for Applied Research to serve as a facilitation point to the University's wide array of business-related programs, resources, facilities, equipment and talent.

Chou brings broad corporate experience in R&D, intellectual property, startup ventures, business development and strategic planning. Her career includes senior-level positions with DuPont Industrial Biosciences, SRI International and venture-backed startups, all companies based in the San Francisco Bay Area or Silicon Valley. She is a former board member for the Bay Area Science and Innovation Consortium (BASIC) and has taught in the University's College of Business and at Sierra Nevada College in Incline Village. Chou holds a Ph.D. degree in chemical engineering from the University of California, Berkeley and a bachelor's in chemical engineering from the University of Texas at Austin.

Other key team members at the Innevation Center happen to all be graduates of the University of Nevada, Reno:

Jim Sacherman, the first director of the Innevation Center, has moved to a part-time role as Entrepreneur-In-Residence through the Nevada Research & Innovation Corporation. In this role he continues to be part of the fabric of business mentors involved with Innevation Center-based businesses. Sacherman also partners with Harvey to teach an undergraduate and multidisciplinary course in Design Process and Sacherman is developing a graduate program in Human-Centered Design.

"A healthy innovation ecosystem can only be sustained in an inclusive environment," Chou said. "Innovation flourishes when people with diverse thinking are brought together for creative problem solving. Innovation methodology such as design thinking thrives on the diverse perspectives and experiences of a diverse team to generate ‘out-of-box' ideas. This inclusive environment goes beyond gender and ethnicity, and includes people of all backgrounds, training and experiences."

The big opportunity ahead? To create scalable companies prepared to compete globally.

"We are seeing tremendous growth in entrepreneurialism, especially technology driven entrepreneurs," Chou said. "Yet the opportunity remains to cultivate and grow the entrepreneurial culture and better connect the University and its expertise and faculty to the community at an even higher level."

"The Innevation Center demonstrates the University's commitment to the land-grant mission. It is a tangible way that we connect to our community and contribute to the vibrancy, economy and health of our community and state, and it is helping build jobs and career paths for our graduates," said Gautam. "I am optimistic about what the future holds."

The Innevation Center is part of Research & Innovation at the University. For more information visit the website at unr.edu/innevation.