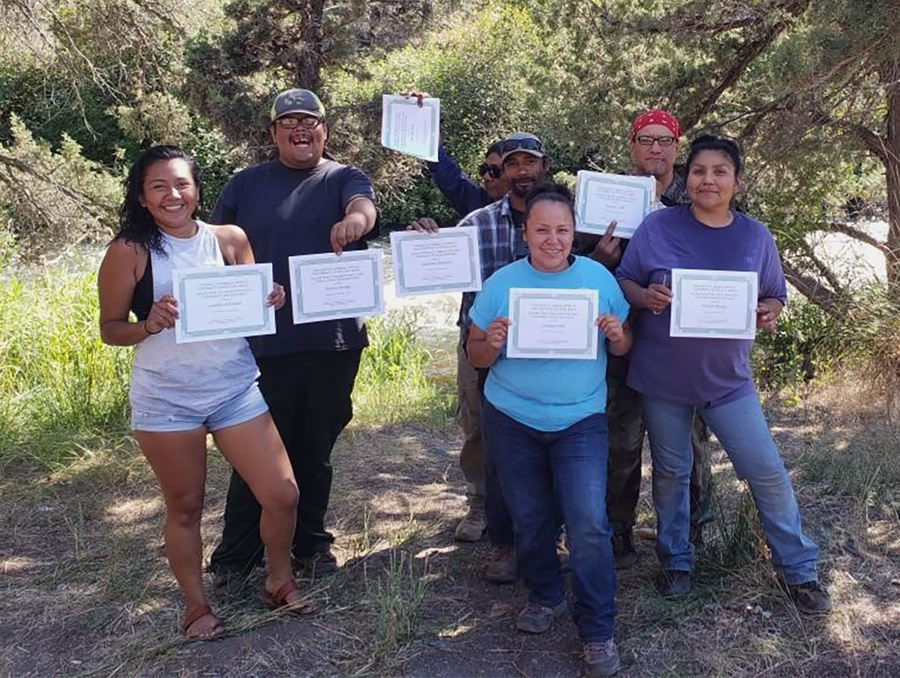 A field school is a common way for archaeology and anthropology students to learn how to locate, excavate and analyze archaeological sites. This past summer, Diane Teeman, a member of the Burns Paiute Tribe and doctoral candidate at the University of Nevada, Reno’s Department of Anthropology, taught a field school near Burns, Oregon, consisting of all Native American students with the goal of learning more than technical skills.

The field school is part of a larger research project called “Our Ancestors’ Walk of Sorrow” that studies the archaeology and heritage of the forced removal of Paiute, Shoshone and Bannock peoples from their ancestral homelands in 1879. Teeman is a co-principal investigator on this project alongside associate professor of anthropology Sarah Cowie. One of the project’s focuses is collaborating with Indigenous communities to respect their cultural practices and ensure they take the lead in telling their own histories.

In an interview with Oregon Public Broadcasting in August, she said one of anthropology’s purposes is to understand Indigenous cultures, but traditionally “Indigenous people were actually silenced from being part of the interpretation of and narratives that were built about them” in academic research.

That problem has haunted the field for a long time, Cowie said.

“If you look at how archaeology was conducted in the past, you could read it as really exploitive of Indigenous people where archeologists make their careers, they make money, and they sell books based on digging up other peoples’ cultural heritage without their permission,” she said. “That has been very painful.”

Digging things up is one point of contention both researchers identified. According to traditional archaeological practices (and codified into federal law), archaeological artifacts that are excavated in the context of archaeological data recovery from federal lands should be curated in a federally approved facility.

“That’s sacrilegious to our Northern Paiute people,” Teeman said. “We believe that all the things that our Ancestors have left behind, they’ve left there for a reason. Those items belong to them, and they belong on the landscape.”

While traditional archaeology focuses on digging things up and putting them in museums, Teeman said she is more interested in giving a voice to Indigenous communities.

“We did less digging and more talking than a traditional field school,” she said. “Our data that we take away is from those conversations as well as what was found when we excavated.”

According to Cowie, it’s important for non-Native archaeologists like herself to understand that most of the land they work on is the ancestral homeland of an Indigenous community.

“Non-Native people came here relatively late,” she said. “For that reason, it is important to work more closely with Native communities on how to do research more ethically.”

Additionally, she says this collaboration strengthens the field of archaeology.

"The work on cultural heritage that Dr. Cowie and Ms. Teeman are conducting is exceptionally important," said Lisa Troyer, Ph.D., program manager, social and behavioral sciences, Army Research Office. "It is generating new insight on the importance of cultural understanding in facilitating collaborations in social science research and respect for heritage on the part of the Army and Department of Defense to promote collaborative research.”

“There are Indigenous ways of knowing about the past, and Indigenous ways of connecting past to present to future that is not part of the archaeology that generally gets taught in universities,” Cowie said. “It’s really missing, and I think it could be really important and innovative in how we understand connections between past and present and future.”

Eight undergraduate students from Paiute, Shoshone and Washoe tribes graduated from the field school and were awarded a “College of Liberal Arts at University of Nevada, Reno, Award for Collaborative and Indigenous Archaeology.” After completing the course, those students are more fully equipped to work as archaeological technicians, bringing their traditional tribal knowledge and understandings to the field to continue decolonizing archaeology efforts.

The Wolf Pack Way: a path of greatness