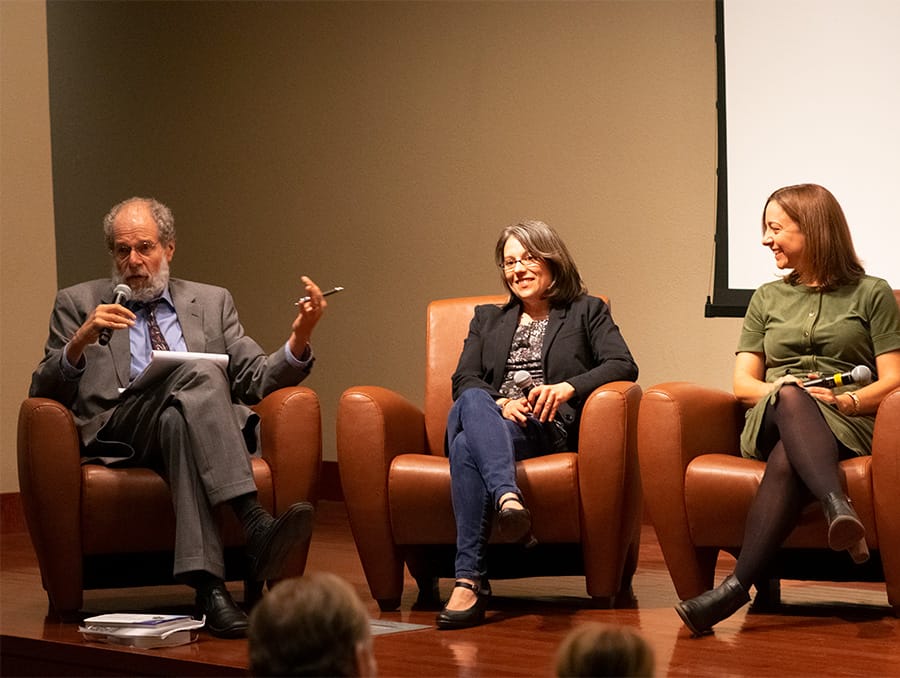 The Reynolds School of Journalism launched the new Mick Hitchcock, Ph.D., Project for Visualizing Science with the “Communicating Science in a Divided Society” panel on Oct. 21. The Hitchcock Project was funded in 2018 as an initiative to prepare students, professionals and scientists to present science in visual and creative forms.

Expert panelists, Vanessa Serrao, creative director of storytelling for National Geographic, Peter Laufer, author, journalist and professor at the University of Oregon, and Stephanie McAfee, climatologist and associate professor at the University of Nevada, Reno, discussed issues that come with communicating scientific findings as part of the launch of the Hitchcock Project.

Dean of the Reynolds School of Journalism Al Stavitsky opened up the event by introducing Dr. Hitchcock, a biochemist and philanthropist, who established the gift for the initiative. He then turned the mic over to Kathleen Masterson, Reynolds School professor of science communication, who moderated the panel.

Serrao, Laufer and McAfee shared insights about the challenges of communicating science with individual presentations of their work followed by a Q&A from the audience.

During his presentation, Laufer said, “Scientists themselves are not good communicators; this is why this initiative at the university is so important because they need the journalists to help them.”

After individual presentations, Masterson sat down with the panelists. She asked McAfee if climate change was being framed negatively by media coverage, which prompted McAfee to say, “There have been no times in the past where there weren’t natural disasters. We can point to events and say it’s really bad this year and study the information, but studies take a long time to complete.”

Following individual questions from Masterson, the floor was opened for a Q&A session with the audience. The audience asked questions about financial support for journalists, how to communicate science attentively and good advice for aspiring journalists.

“Neither party can do it themselves,” Serrao said in response to a question from an audience member. “You need scientists to do the science and great communicators to get the message out there.”

The panelists told the audience that defunding science journalism allows for other organizations to step up. Panelists then suggested communicators should aim for their stories to be interesting enough to gain attention.

Serrao closed the lecture by giving advice. “Don’t wait for permission to do what you want to do. Just start doing it, and eventually, it’ll lead somewhere.”