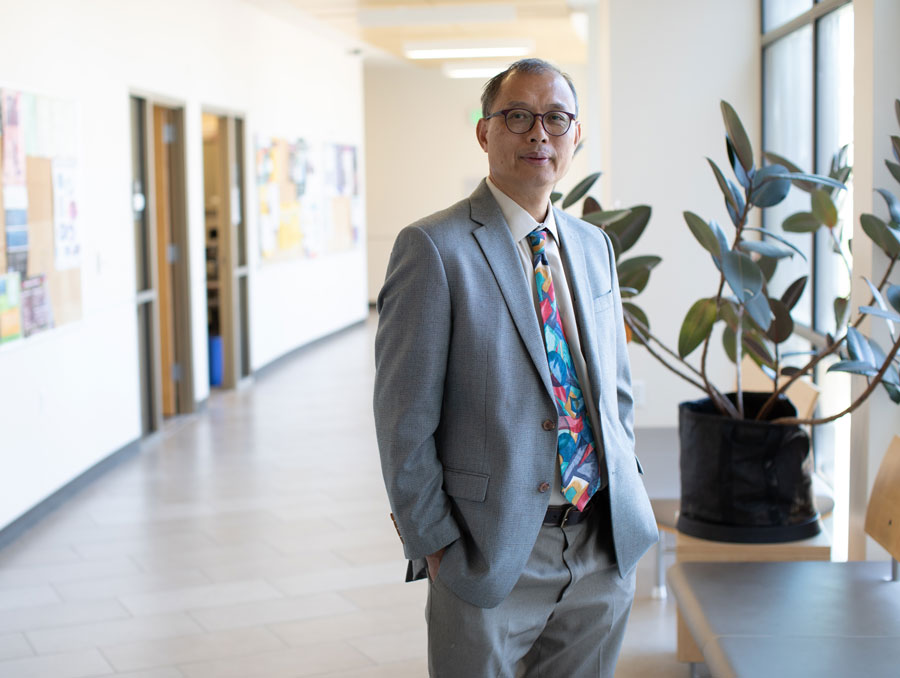 “I like to build stuff,” said Tin-Yau Tam, who goes by T.Y. and joined the University on July 1, 2018. “I built my own house in Auburn, Alabama. I think that’s my nature.” Before Tam came to the University of Nevada, Reno, he spent 30 years as a faculty member at Auburn University in Alabama, the last six of those as department chair. He now holds the Seneca C. and Mary B. Weeks Endowed Chair in Mathematics and sits as chair of the burgeoning Department of Mathematics and Statistics. It would be difficult to imagine a better person for the job.

Tam is practical. He likes to get his hands dirty. When he’s not running and promoting the department or doing mathematics research, he’s a woodworker, a handy man and an amateur mechanic. “I still change the motor oil for all my cars,” said Tam. “I enjoy doing it.”

For Tam, the hands-on nature of the work is a perfect complement to his research. “The good thing is,” said Tam, “when you spend enough time, you get something done. Doing math research, you can spend a huge amount of time without getting things done. That’s the nature of it.”

Tam’s research interests are matrix theory and applications, multilinear algebra, numerical ranges and Lie Theory, making him a bit of a rarity in the world of mathematics, in which researchers typically choose one area specialization. He serves on the editorial boards of three mathematics journals, has authored or coauthored more than one hundred peer-reviewed articles, delivered over 200 talks and organized numerous international conferences. In the first half of the summer of 2019 alone, he traveled to China and Brazil to promote the department’s graduate programs and hosted a mathematics conference on campus, the 8th International Conference on Matrix Analysis and Applications.

IMCAA 2019 aimed to stimulate research and the interaction of mathematicians in all aspects of linear and multilinear algebra, matrix analysis, graph theory and their applications. Experts from 10 countries attended and were pleasantly surprised to find that, far from a desert wasteland, the Biggest Little City is a thriving and lovely mountain town, replete with a river running through it and, of course, a beautiful university campus. While welcoming the participants, Dean of the College of Science Jeff Thompson and Tam promoted the graduate programs, specifically the new doctoral programs.

The two programs were started in 2017, shortly before Tam’s arrival at the University. “We’re still building them,” he said of the programs, “but we have quite a number of Ph.D. students – around 25. We are still recruiting more. I like to produce students and do research with them.” Tam advised eight Ph.D. students in his time at Auburn University and is eager to recruit more at the University.

Math is one of the few subjects on campus that is almost universally required, which keeps Tam and his department busy. They have about 40 faculty members, with roughly two-thirds of those in tenured or tenure-track positions, and true to his word, Tam is building the department bigger with more experts to advise students and do research. At the start of 2019, four new members from a range of disciplines joined the department.

Tam once wanted to become a high school math teacher, which is what drew him to the subject in the first place, but he ended up liking mathematics so much that he pursued research in the field instead. He understands the importance of mathematics education, and his unique blend of experiences, breadth of knowledge and research interests and passion for building serve him well as department chair.