For the third year in a row, the world languages and literatures department in the College of Liberal Arts was awarded the National Foreign Language Center STARTALK grant to implement its Chinese language and culture summer program. This year's program, which began June 10 and will go through June 28, had its largest enrollment to date with around 40 students in the program. The grant allows students in seventh-12th grades to attend the all-day camp at the University of Nevada, Reno for three weeks, tuition free.

During the three-week program, students are completely immersed in the Chinese language and culture by participating in activities that teach them about Chinese customs. Faculty from the University as well as Washoe County School District instruct the students completely in Chinese. The classroom is decorated with Chinese posters and lanterns, students have helpful reminder cards on their desks in Chinese calligraphy and two-three instructors are in the room to work with the students one-on-one. 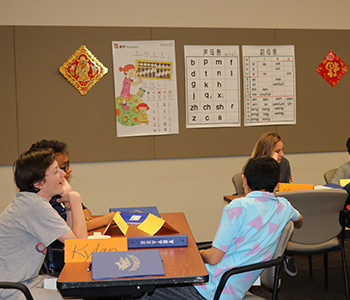 In just a few days since the program began this year, the students were already following instructions and answering commands in Chinese from their instructors. Especially since the courses are designed for beginner-intermediate levels, the full-immersion design is clearly effective.

This year's schedule included a visit from Ryan Smith, Washoe County School District's College and Career Transition Coordinator and President of the Nevada Language Association. Smith visited the campus for a day to observe the classroom instruction, provide feedback to instructors and consult with instructors on interpersonal skills.

"I'm making sure the instructors are using techniques to build comprehension and I'm looking for use of culture in the instruction so it's not taught separately," Smith said.

Smith values the Chinese STARTALK program at the University because it aligns with his language learning advocacy at a regional and national level.

"I think it's really important to provide equal opportunity and access to language learning for students," Smith said. "All students have the opportunity to participate in learning Chinese at this summer camp, rather than just the two schools that offer Chinese during the school year."

Smith appreciates how much the world languages and literatures department reaches out to the school district to work collaboratively on language instruction. He said teachers are frequently invited to campus to workshop with University faculty and are even invited to participate in the department's annual awards ceremony. As a result, this outreach helps recruit high school students into the language program at the University.

"Many students come to major in language during college and even become teachers," Smith said.

Both he and Chinese STARTALK program lead lecturer from the University, Lin Li Hall, hope to continue the program and expand it next year. Hall has been especially proud of the program's success, but looks at each year as a learning opportunity to improve upon for the following year.

Registration for the 2020 programming should be available online in the spring.