How does appearance affect our success?

How does appearance affect our success?

Social science research shows that a person’s physical appearance has a meaningful impact on their life experiences and opportunities, but the story is more complicated than people might expect.

For the most part, attractive people enjoy a lot of perks. For example, a psychological concept called “the halo effect” that has strong ties to beauty; upon a first impression, highly attractive people are presumed by others to have a variety of positive personality traits, such as altruism, stability, and intelligence, compared to less attractive people, as though an invisible “halo” were shining down upon the beautiful. This helps to explain rampant appearance discrimination in the workplace, dating market, and even in our court system. In his book Beauty Pays, economist David Hamermesh shows that attractive people are more likely to be employed, are paid higher wages, are more likely to be approved for a loan, negotiate loans with better terms, and have better looking and higher-status spouses. Attractive criminals even receive lighter sentences for their crimes (and occasionally their mugshots go viral and they end up with fan-clubs and modeling contracts – Google “Hot Convict” for that story!).

The research I described above paints a picture in which beauty predicts having a good life, but the story is more complicated that. In fact, I strongly caution anyone from investing too heavily in their own appearance. There are two reasons I say this. The first is a critique of the research and its implications, and the second is a more holistic way of understanding “success.”

Okay, so what does this research really mean for individuals?

It may not be surprising to learn that the greatest differences in life experiences are found when comparing the “1s” to the “5s.” However, differences in life experiences between, say, a “3” and a “4” (one level of difference) or even between a “1” and a “3” (two levels of difference) were generally miniscule. In statistical terms, they were frequently “insignificant,” suggesting that even if a person were able to improve their appearance, they would have to change from being “exceptionally unattractive” to “strikingly beautiful” in order to experience meaningful benefits along the lines I described above. This is simply impossible, even with modern day technology. As David Hamermesh explained “While looks can be altered by clothing, cosmetics, and other short-term investments, the effects of these improvements are minor. Even plastic surgery doesn’t make a huge difference.” In other words, spending excessive amounts of time or money, or putting oneself through miserable weight-loss diets and/or painful or risky medical procedures is NOT a logical investment of one’s resources, time or health. Also, in one of the largest studies of this kind – with 2,774 participants – over 95% of people were rated as 2s, 3s, or 4s, so at the end of the day we’re all pretty much average, and I, personally, find some comfort in that.

What do we really mean by “success”?

My argument that people should not invest too much into their appearance because there won’t be much payoff may leave some people feeling quite discouraged about their ability to become more attractive and therefore more successful. It seems unfair. And yet…. this only matters if our definition of “success” is entangled with money and status. The good news (I think) is that, despite its other perks, BEAUTY IS NOT A STRONG PREDICTOR OF OVERALL HAPPINESS OR LIFE SATISFACTION. Gorgeous people are not happier than homely folks. Rather, decades of social-psychological research tells us that the single biggest predictor of human happiness in the quality of a person’s social relationships. In other words, if you want to be happier and more satisfied with your life, you should work on improving the health of your relationships, not the appearance of your body.

Wait - Does this mean that appearance discrimination doesn’t matter?

No. Absolutely not. In fact, my own research focuses on appearance discrimination in both the workplace and in cultural markets, such as the fashion industry. Happiness is more important than money, but income inequality and social stigma and bullying are both serious issues that need to be addressed. We need to change our culture at all levels to accept and celebrate bodily diversity, and our legal system needs to recognize appearance discrimination as an issue of civil rights. I tell my students to stop wasting their time and energy on the latest fad diet, and to instead channel those resources towards more reliable self-care projects and especially towards activism. In particular, I’m very critical of media messages that (1) tell us that our looks are the most important aspect of who we are (which simply isn’t true), and then (2) present images of beauty that are extremely photoshopped and therefore physiologically impossible to achieve in real life. These images and messages contribute to poor body image and eating disorders, and we need to hold advertisers and social media influencers accountable for the damage they cause.

Okay. Then does this mean that caring about beauty and fashion and makeup is always bad?

Absolutely not, again! I personally love playing around with fashion and makeup. As a feminist and sociologist of culture I value people’s enjoyment of creative self-expression and I recognize that indulging in beauty practices can be an element of self-care and pride for many people. Self-expression matters. Identity matters. Creativity matters. Pleasure matters. That said, for every person there is a point of diminishing returns on investing in appearance. I encourage people to thoughtfully find their point of diminishing returns, so they can more consciously decide how to spend their time and resources. 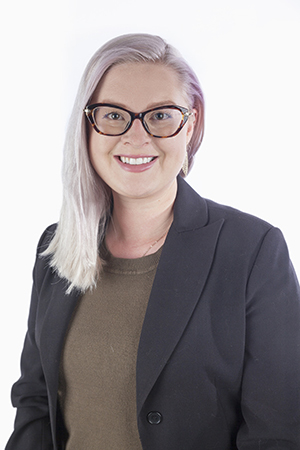 Kjerstin Gruys is an assistant professor of sociology in the College of Liberal Arts at the University of Nevada, Reno and author of “Mirror, Mirror, OFF the Wall: How I Learned to Love My Body By Not Looking at It for a Year,” (Avery, 2013). She has been published in Social Problems and Social Science & Medicine, recently on the ForbesWomen section of Forbes.com, among others.

Prior to earning her Ph.D. from UCLA (2014), Kjerstin worked as a merchandiser in the corporate offices of two multi-national fashion firms. She is currently developing a book manuscript, tentatively titled: “True to Size?: A Social History of Clothing Size Standards in the U.S. Fashion Industry.”