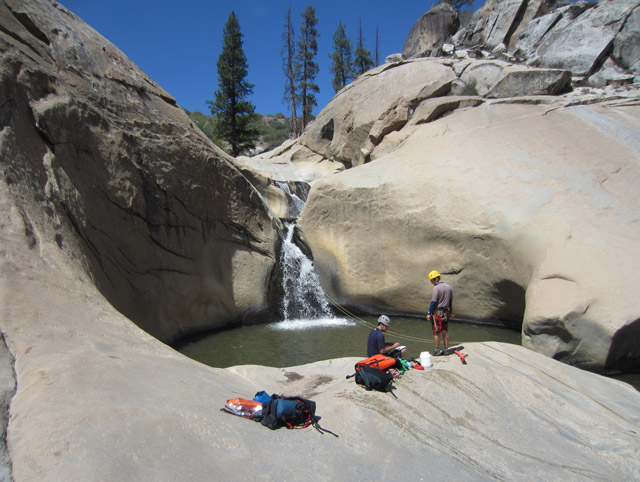 Joel Scheingross, Assistant Professor in the Department of Geological Sciences and Engineering, has been named the 2019 Luna B. Leopold Award recipient by the American Geophysical Union (AGU) for his ground-breaking research and resulting advancements in the understanding of sediment transport and incision by steep mountain rivers. Scheingross will be presented the award at AGU’s Fall Meeting on December 12th in San Francisco.

“The breadth of Joel’s expertise is remarkable,” said Kelin Whipple of Arizona State University who nominated Scheingross for the award. “His work encompasses detailed and carefully executed field work, designing and running clever scaled analog laboratory experiments, and the testing, development, and refinement of relevant theory. Luna Leopold would approve.”

Scheingross joined the Department of Geological Sciences and Engineering in January 2019. His research addresses problems in geomorphology, sedimentology, carbon cycling, and beyond by utilizing a combination of field work, controlled physical experiments, geochemical analyses, remote sensing, and theory. Scheingross received his Ph.D. in Geology from the California Institute of Technology, and prior to joining the University of Nevada, Reno, he worked as a postdoctoral scientist with the German Centre for Geoscience Research in Potsdam, Germany.

Eighty-two earth scientists, including Scheingross, received accolades and awards from AGU this year across a diverse group of sub-disciplines. The Luna B. Leopold Award is presented by the Earth and Planetary Surface Processes Section.

“The Earth and Planetary Surface Processes Section of AGU is filled with many outstanding early career scientists,” Scheingross said. “To be recognized by my peers to achieve this award is one of the most humbling and touching achievements of my career thus far.”

In a letter announcing the award recipients, Robin Bell, AGU President and Council Chair, and Mary Anne Holmes AGU Chair, expressed their congratulations and gratitude to the awardees for contributing to “the planetary health and well-being through their scientific advancements and outstanding service to the science and to AGU.”

It is an honor and distinct pleasure to present Joel Scheingross as the recipient of the 2019 Luna B. Leopold Award. Through his multi-faceted research, Joel has made fundamental advances in the understanding of sediment transport and incision by steep mountain rivers. The breadth of Joel’s expertise is remarkable: his work encompasses detailed and carefully executed field work, designing and running clever scaled analog laboratory experiments, and the testing, development, and refinement of relevant theory. Luna Leopold would approve.

Joel’s monitoring of fluvial processes in steep streams has taught us much about the relative contributions of form drag, relative roughness, channel slope, and grain hiding in determining initiation of motion thresholds. Following up this initial effort, Joel designed and executed a ground-breaking experimental study on the relative contributions of bedload and suspended-load abrasion in bedrock channels, demonstrating that suspended load can dominate river incision by abrasion during large floods in steep rivers. Unsatisfied with just two fundamental contributions, Joel turned to the problem of waterfall erosion, again integrating novel experiments, theoretical developments, and field observations. Joel’s work documents and quantifies waterfall retreat accomplished not by erosion on the waterfall face nor by undermining due to scour in plunge pools or seepage erosion, but rather by the formation and downward drilling of new plunge pools upstream of the last. Importantly, this work indicates that commonly observed morphologies in bedrock channels may well have an autocyclic origin and are not necessarily tied to local variations in substrate properties or driven by changes in boundary conditions as often envisioned.

Finally, Joel gives selflessly to our community and even as a student Joel was proactive in mentoring younger students. As the Leopold award recipient, Joel stands as a role model to other young scientists beginning careers in the study of surface processes.