As Derby draws near, University’s Equestrian Team up and running again

As Derby draws near, University’s Equestrian Team up and running again

As millions across the country tune in to watch the Derby horses burst out of the gate this Saturday, many northern Nevadans will be joining them, including students in the recently resurrected Nevada Equestrian Team, a University of Nevada, Reno club sport that went bust about 10 years ago.

Horsemanship not new to northern Nevada, or the University 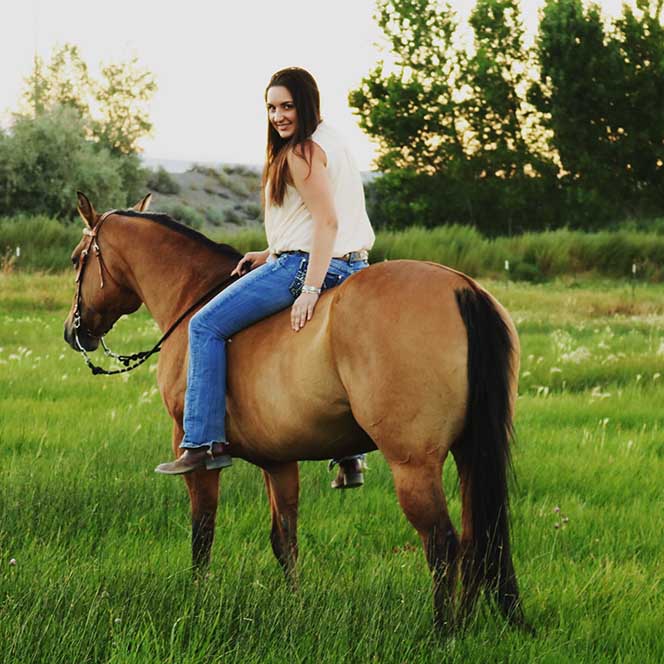 Jenna Damonte, senior and president of the Nevada Equestrian Team at the University of Nevada, Reno, shows off her horse Lena. Photo by Delaney Hanson.

"Northern Nevada has a huge horse community," said Club President Jenna Damonte, a senior at the University majoring in biochemistry and neuroscience. "There are students at the University and local high school students who really want a chance to be involved in some sort of equestrian activity as part of their college experience."

Damonte's family has been ranching in Reno for decades, and her father, Steve Damonte, is an alum, a veterinarian and co-owner of Comstock Equine Hospital. The last two years, Jenna tried out for and made the Reno Rodeo Flag Team. This year, instead, she has chosen to dedicate her efforts to helping the University's Equestrian Team get up and running again.

Horsemanship activities have been tied closely with the University's College of Agriculture, Biotechnology and Natural Resources, with the College having its Agricultural Experiment Station and equine facilities on Valley Road. In addition to the former equestrian team, classes such as horsemanship were offered at the University. But, the recession hit, and the equestrian-related programs and activities were one of the casualties.

The path to bringing it back

"The Dean is very behind this," Damonte said. "He knows the Reno-Sparks community really wants this, and thinks it is an essential part of having a healthy Ag program at the College and University."

Damonte said the Dean ponied up some College funds to pay off a small amount of old debt left over from the former club. He also agreed to meet with Angie Bader, an alum whose daughter Jordan is graduating from Bishop Manogue High School this year. Jordan plans on studying veterinary science and wants to attend a university with an equestrian program.

"It seemed silly that our kids would have to go out of state to college if they want to compete in equestrian activities," Bader said. "We went and looked at a couple of other universities that have teams and seriously considered them. But, we were able to meet with the Dean and work to resurrect the team here, and quite frankly I think UNR is a better school, so Jordan will be staying here."

After meeting with Payne last fall, Bader and a couple of other parents, Susan Howe and Carrie Young, helped get the ball rolling, meeting with other parents, students and supporters in the horse community. Howe's daughter, Nicole, is a sophomore at the University studying biochemistry. In December, students met, and Nicole was elected vice president of the team, and Damonte was elected president.

Ties to 4-H: Providing equestrian activities and networking, and inspiring students to give back

Damonte said her experiences in 4-H, a youth development program of the College's Cooperative Extension unit, had a lot to do with taking on the additional responsibility.

"I've been working with a lot of these people my whole life," she said. "I did 4-H - lambs, not horses, I don't know why. I've ridden horses and been involved with the horse community forever. It's kind of a 4-H community. I wanted to help out. It's a good opportunity to give back."

Carrie Young and her daughter, Chloe, are also involved in 4-H. Chloe has been in the local 4-H High Sierra Riders Club for six years, and Carrie is a co-leader of the club. Chloe, who is a freshman at the Academy of Arts, Careers and Technology, a high school in Reno, wants to study veterinary science, and of course, also wants to compete in an equestrian program in college. Carrie, who also works at the University, has agreed to be the faculty adviser for the revived Nevada Equestrian Team.

Team practicing, looking where to compete and fundraising

The team has about 30 members currently, young men and women, and wants to compete in both English and Western events. They are practicing a couple times a week right now, under coaches Sarah Mullins of Meadow View Farms in Reno (English), and Jeanne Levine of Love 2 Ride Ranch in Spanish Springs (Western).

Before the team can start competing this August, they have to identify and be accepted into a zone under the Intercollegiate Horse Shows Association (IHSA), in which they can compete in both Western and English. The former team competed in California, but none of those zones have any open slots right now, so they are looking at possibly competing in a Utah-Idaho-Montana zone.

Eventually, Damonte said she hopes the team can compete as part of the National Collegiate Equestrian Association (NCEA), which falls under the NCAA, and as such would receive support from the University's athletics program as a varsity sport. She also hopes that the University's facilities on Valley Road can be renovated and updated, so that in future years, the University can host competitions, a requirement in the NCEA/NCAA. Currently, the University has a Rodeo Team as club sport that has horses at the Valley Road facility, but the facility would need work to be used by the Equestrian Team and host equestrian events.

For now, the team is continuing to practice and is planning to hold fundraisers this summer to help cover some of the costs they will incur when they start competing in August.

"We will need team shirts, hats for Western, show helmets for English, and the money needed to travel - that will be a big one," she said.

They are also continuing to let students, and future students, know that the Nevada Equestrian Team is up and running.

"We've been volunteering at some horse shows, recruiting, and there is a lot of interest. We are going to start inviting incoming freshmen in June or July."

As for more immediate plans, Damonte says that she'll definitely be tuned in to watch the Kentucky Derby on TV this Saturday.

"I'm hoping to go one year, but I want to make it perfect," she said, "and it's really expensive, so maybe next year."