If you could pull back the vegetation and man-made structures and have a high definition view from above, what would you learn about the landscapes and valleys below? A lot, it turns out.

A significant recent effort by the Nevada Bureau of Mines and Geology at the University of Nevada, Reno and the United States Geological Survey (USGS) utilized airborne lidar technology to produce high-resolution topographic maps of the Reno-Sparks-Carson City area. The data will benefit a number of in-progress Nevada Bureau of Mines and Geology studies to understand earthquake and flood hazards, as well as natural resources. 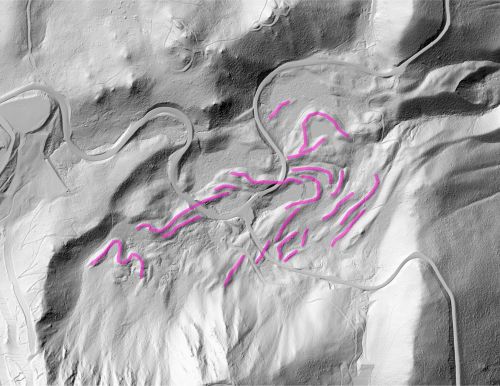 From Reno’s Bare Earth: Below the Neon, this image shows the path of ice-aged glaciers on Mount Rose with glacier moraines marked in pink and crossing Nevada State Route 431.

Using Light Detection and Ranging technology, or lidar, the project collected data by bouncing light pulses off the surface of the earth. The result is a high-resolution, three-dimensional topographic map that allows improved identification of geologic features such as flood plains, glacial deposits and earthquake faults. This can also support the assessment of ecological systems, infrastructure planning and the identification of geothermal reserves to support clean-energy production.

Under the direction of Nevada Bureau of Mines and Geology Director Jim Faulds and spearheaded by faculty member and Geologic Mapping Specialist Seth Dee, the project received initial funding through the USGS and Research & Innovation at the University of Nevada, Reno.

The many significant implications of this high quality dataset were quickly evident. Several entities and agencies recognized this potential and extended financial support to allow the lidar data to be expanded in areal coverage and acquired at a greater level of resolution. The Washoe County Regional Basemap Committee, the U.S. Forest Service, Lyon County, Storey County, City of Reno, City of Sparks and NV Energy are among those that provided additional support for the project and are now using the data for planning or hazard mitigation.

Through the USGS’s 3D Elevation Program (3DEP), lidar mapping has been completed in many other states, though typically concentrated in urban or well-populated settings. The USGS 3DEP program requires a 1:1 funding match, which is easier to obtain for more populated areas with large amounts of private land. In the wide-open spaces of Nevada, where approximately 86 percent of the state is owned by the federal government, it is more difficult to obtain this match and thus lidar acquisitions have progressed more slowly compared to other regions. This presents opportunities for future work in the region and adds the element of discovery to nearly any lidar acquisition in the state.

“Nevada is still the wild west,” said Rachel Micander, a geographic information system analyst in the Nevada Bureau of Mines and Geology. “There’s a lot going on in this state from the geographic and geologic perspectives. Nevada is the second most mountainous state and the state with the most named mountain ranges.”

“Nevada is still relatively unexplored; we are still figuring it out,” said Faulds. “We don’t know as much about our flood hazards compared to many other parts of the country, and we continue to find new earthquake faults. There’s a whole element of discovery here that isn’t happening in other areas.”

Seth Dee remarked that the new lidar data acquisition for the area “is the equivalent of getting a much better lens on a telescope. The best topography widely available 20 years ago was from contours every 40 feet on a topographic map. With lidar we get a grid of data with elevation measurements spaced at least every meter (~3 ft), accurate to 10 cm (4 inches) vertically. We can now quickly map sub-meter geologic features, in addition to countless applications in other disciplines.”

It’s well known that Nevada is a seismically active state. Faulds noted that understanding the geologic setting and finding new faults should not be a cause for concern, but rather recognized as valuable information in the effort to monitor seismic activity, mitigate hazards, aid in the planning of infrastructure and development, and guide future geologic exploration.

“These data can help us focus in on where to conduct our geologic work,” he said. “We see there is a fault scarp at a certain location; we now know we need to go there to learn more.”

The mapping data also informs flood planning by accurately defining what land could be inundated when flood waters rise. The Reno’s Bare Earth: Below the Neon online story map, which was developed by Micander and her fellow geographic information system analyst, Irene Seelye, shows the example of the Carson River near Dayton, Nevada.

The Nevada Bureau of Mines and Geology team is understandably proud of the project and deeply appreciative of the support and engagement behind it.

“This demonstrates the University’s public service role and the role of statewide programs that are out there doing things for the public good,” said Faulds.  “This is a great example of partnership and what we strive to do to achieve really broad benefits.”

For more information about the Nevada Bureau of Mines and Geology visit nbmg.unr.edu.