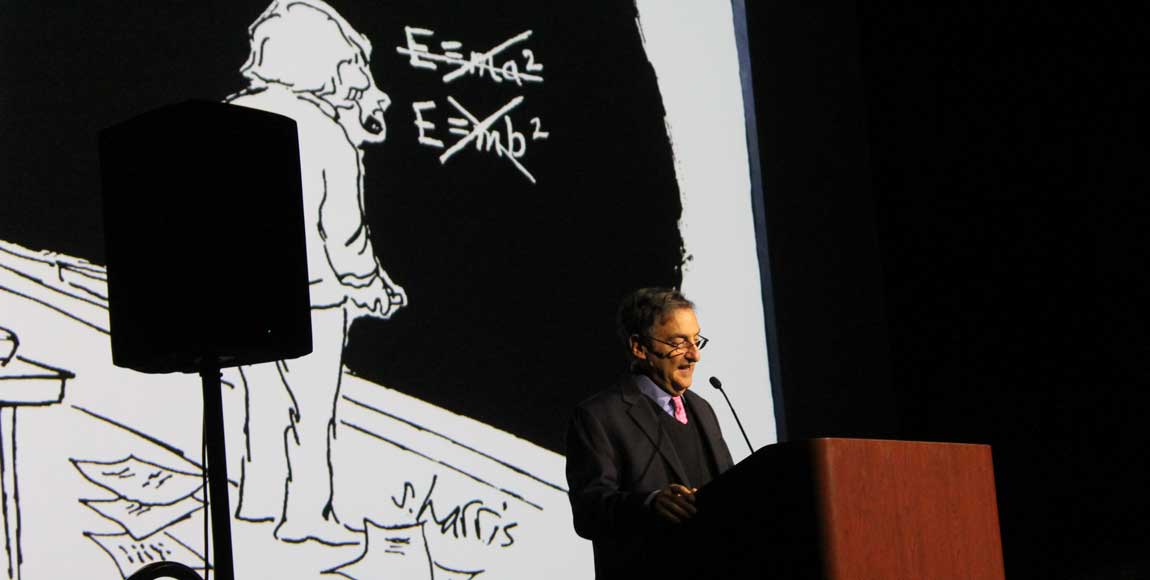 The College of Engineering Distinguished Speaker for 2018 was Ira Flatow, host of Public Radio's "Science Friday." Speaking to a crowd of nearly 700 students, staff and Nevada System of Higher education regents, Flatow stressed the importance of "those ideas that always pop into your head."

One inspiring aspect of Flatow's lecture was how the concept of failure impacts our lives in many fields, not just engineering.

"Failures are important to science and engineering and we need to talk about them," he said. Declaring that creativity can happen at any age, Flatow assured the students in the audience that your most creative years are in front of you.

"It's super cool that the school was able to bring Ira in," said Frances Vinlove, an engineering student and MESA representative at the lecture. "I think he's great."

"I love public events and live radio stories," said Flatow. "People say things that are so interesting when they're allowed to say it." He also advised the audience to try and get around the "geeky" parts of themselves if they want to be creative and inventive. "Fear is a great motivational factor, and it can be a great catalyst of change."

Flatow encouraged young journalists who are interested in science and technology to "just do it."

"I had no college training, I never intended to be one or practice journalism," he said. "There are infinite outlets, so you can become your own blog, podcast or newspaper."

Flatow's lecture focused around what he considers to be the "Catalysts of Creativity": necessity, timing, inspiration, vision, determination, luck-chance and failure. "People are always looking for different ideas," Flatow said.

He also said that being in the right place at the right time is also a catalyst for change.

"We get great ideas from living things, sometimes you don't know if your invention really is useful or how smart you really are."

With a degree in engineering from State University of New York at Buffalo, Flatow got his start as a radio and television journalist by working at the college's radio station. His boss left the station to move to Washington, D.C. to start NPR and its popular program "All Things Considered." Flatow asked his boss to get him a job with NPR. "Get me out of Buffalo," he joked. "It's way too cold there."

Flatow's first reporting assignment focused on covering Vietnam protestors and their riots. In 1971, he began as a science correspondent at NPR, covering hot topics at the time like the Kennedy Space Center and the HIV/AIDS epidemic. "I worked for nothing as an apprentice when starting out," he said. Flatow also hosted Newton's Apple, a PBS science program from 1982 to 1987. The educational program won several awards, such as the Parent's Choice Award and the 1989 Daytime Emmy Award for Outstanding Children's Series.

Other awards that Flatow has recently won include the Carl Sagan Award, the Isaac Asimov Science award, and the Nirenberg Prize for Science in the Public Interest.

"Our program also has the highest proportion of female guests [on Science Friday]," Flatow said. "We also give priority to postdocs as a way for a younger audience to identify with them." Flatow and the rest of the Science Friday crew use live feedback tweeted to them from the audience to determine and find their next guests. "We want it as diverse as we can get," he said. "It's great to listen to the audience and how they talk within each other."

Flatow is also the founder and president of the Science Friday Initiative, a 501c dedicated to education on science for everyone through radio, television and internet programs. The company also works with teachers to produce videos and other curriculum intended to teach students about science in other ways besides a textbook.

The Distinguished Lecture series that the College of Engineering hosts has been a popular reoccurring event since its introduction in 2010. Dean Manos Maragakis describes the lectures as something not just for engineers but for the general public to enjoy as well.

"The College of Engineering has seen an unprecedented growth in the last 9 or 10 years," said Maragakis. "We want our graduates to compete anywhere."

One of the goals of the College of Engineering is to base their research on innovation that will impact the state and entire country.