University of Nevada, Reno biologists study effect of herd restoration over past 50 years

University of Nevada, Reno biologists study effect of herd restoration over past 50 years

Once numbered in the millions across the western United States, bighorn sheep populations declined dramatically in the 1880s and 1890s and by 1960 less than 20,000 remained in the U.S., with only 3,000 bighorn sheep in Nevada. Historically, bighorn sheep occupied most of the rugged, high‐elevation habitats found from northern Mexico to southwestern Canada.

The large declines were due to a combination of extensive unregulated hunting, overgrazing and disease from domestic sheep and goats.

Now, with years of relocating bighorn sheep back into the mountain ranges of Nevada, the Nevada Department of Wildlife, the Wild Sheep Working Group and several other state and federal agencies and sportsmen’s groups have helped bring the population to an estimated 12,000 animals.

In the journal Evolutionary Applications, University of Nevada, Reno biologist Josh Jahner and his colleagues authored an article that investigates the genetic consequences of the last 50 years of desert bighorn sheep translocations across Nevada.

Translocation in wildlife conservation is the capture, transport and release of species from one location to another, and in this case used to mitigate population declines and restore locally extirpated populations of bighorn sheep, Nevada’s official state animal.

The scientists used genetic data collected from 300 sheep from around the state (Great Basin and Mojave Deserts) to identify if genetically distinct herds exist in Nevada and to analyze the influence of recent translocations on the genetic diversity of the species.

“Our results provide a reference for continued translocation decisions and a baseline for understanding how past and future population responses might relate to genetic variation within and among herds,” Jahner said. “This can be useful in herd management and increasing the number of bighorn sheep in Nevada and their entire range across the western United States.”

The team’s goals, among other things, were to characterize genetic diversity and differentiation among herds, especially among Mojave Desert source herds; to evaluate the genetic composition of reintroduced herds in light of translocation histories; and to quantify the degree of genetic diversity within translocated herds that received bighorn sheep from one or more source population.

Source or remnant populations are primarily those in southern Nevada, near Las Vegas. These populations and only a few others in Nevada are believed to have been continuously occupied and did not experience the dramatic declines that occurred elsewhere in the state.

“We uncovered an intricate genetic landscape structured by 50 years of translocation decisions,” Jahner said. “This can be used to understand how future population responses to disease outbreaks, climate change, and other environmental challenges are affected by genetic diversity and variation.”

One of the most surprising findings of the study was evidence of a previously unknown genetic lineage of bighorn sheep in Nevada. 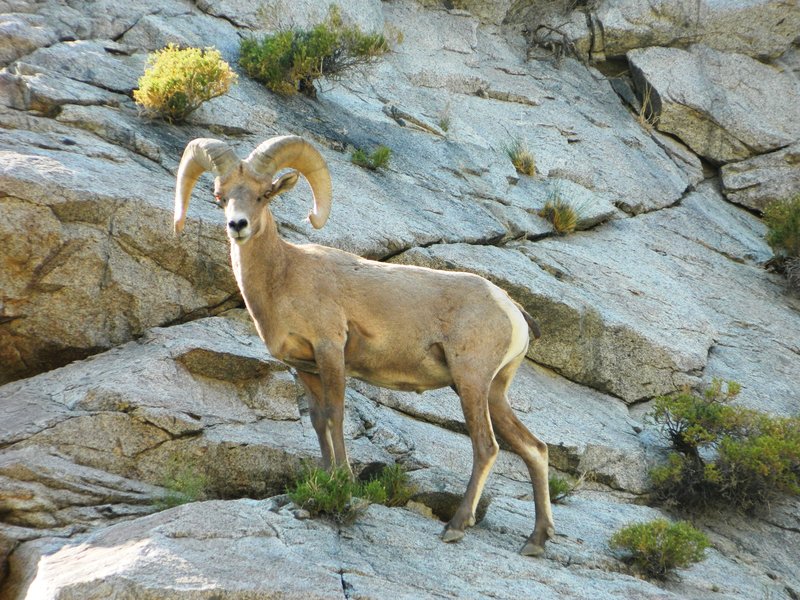 A bighorn sheep at Mt. Grant

Earlier translocation programs have successfully re-established many formally extirpated bighorn herds, but most of these programs pre-date genetically-informed management practices. The state of Nevada presents a particularly well-documented case of decline followed by restoration of extirpated herds. Desert bighorn sheep (O. c. nelsoni) populations declined to less than 3,000 individuals restricted to remnant herds in the Mojave Desert and a few locations in the Great Basin Desert. Beginning in 1968, the Nevada Department of Wildlife translocated about 2,000 individuals from remnant populations to restore previously extirpated areas, possibly establishing herds with mixed ancestries. There are now approximately 12,000 bighorn sheep in Nevada.

“Our results add to a growing literature on how population genomic data can be used to guide and monitor restoration programs,” Jahner said. “It’s exciting to see the results and its potential use in herd management decisions.”

For the University of Nevada, Reno team, this work began 10 years ago, building on NDOW’s program to manage the bighorn sheep herds.

“I began working closely with NDOW when I first arrived in Nevada in 2008,” Matocq, who coordinated sample collection for this study, said. “At that time, they had not collected a large number of samples and did not have a robust hunter harvest return program, but now they do.”

She worked with NDOW to obtain genetic samples for this study system, in addition to many others, using grants obtained from NDOW and the University’s Nevada Agricultural Experiment Station to support the research.

“When Tom Parchman joined the faculty, it was a great opportunity to expand our previous genetic work in this system to encompass new methods in which he has expertise,” she said. “These new methods were integrated into our most recent research grants which allowed us to hire Josh Jahner as a postdoc and to generate this paper.”

By using a next-generation sequencing technique, the authors were able to detect genetic structure at a finer geographic scale than most other previous studies of bighorn sheep genetics.

"Our results add to a growing literature on how population genomic data can be used to guide and monitor restoration programs," Jahner said. "It's exciting to see the results and its potential use in herd management decisions."

Parchman, an expert in genetics and genomic biology, generated the sequence data, and Jahner, with support from Parchman, conducted the majority of the bioinformatics. Once the samples and sequence data were in hand, it took about a year to complete the analysis.

This work was funded by a grant from the Nevada Department of Wildlife, the U.S Fish and Wildlife Service, the University’s Nevada Agriculture Experiment Station Hatch grant and University funds.

All of the authors on this Evolutionary Applications paper are part of a large North American consortium of bighorn sheep geneticists and ecologists who are working to expand what can be learned about the ecology and optimal management of this system through the development of new genomic tools.