Assistant Professor Amilton de Mello's teaching and research are having a powerful impact at the University of Nevada, Reno's Meat Science Lab and on the safety and sustainability of meat-production practices worldwide. His study of pathogens has led to new methodologies to reduce illness-causing bacteria in meats, and he developed the Bonanza Cut, a succulent piece of meat offering the industry a profitable new product. In May 2018, de Mello was one of five appointed to the National Advisory Committee on Meat and Poultry Inspection by U.S. Secretary of Agriculture Sonny Perdue. 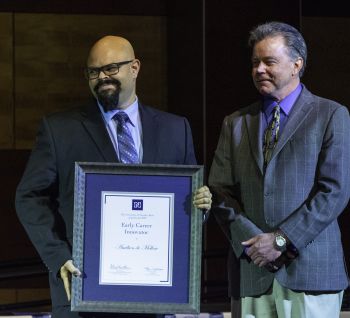 These accomplishments have earned de Mello the 2018 Foundation Early Career Innovator Award, an honor in recognition of his work, which exemplifies the spirit of innovation, commercialization and entrepreneurship.

"Receiving the award inspires me to do more, learn more, research more," de Mello, faculty member in the College of Biotechnology, Agriculture and Natural Resources, said. "It makes me want to be a better professional."

Working in the industry

After receiving his Ph.D. in meat science and muscle biology from the University of Nebraska-Lincoln in 2010, de Mello - who also holds a doctorate of veterinary medicine - worked for a food processing company as a technical specialist, assisting in industry research to improve the company's products. He was promoted to quality assurance food safety superintendent and tasked with solving problems and improving practices in the processing plant.

While doing this work, de Mello discovered what he calls a "small cut of meat with a significant amount of potential." He took a few of these cuts home to cook and sample, and recognized that he had found a delicious new product.

This caused de Mello to have a personal revelation, "I realized that research development has always been my first passion, and that's what I wanted to do."

After seeking and obtaining a faculty position at the University, de Mello's first goal was to develop this cut of meat. The University embraced his vision and he soon developed the Bonanza Cut, which is very flavorful and tender, being comprised of 14 percent fat.

The innovative product has found success in many foreign markets and has created a positive economic opportunity for the industry.

De Mello's work in food-safety research has also been significant, with his development of a methodology for the application of bacteriophages, viruses that infect specific bacteria and causes it to disintegrate. This application process eliminates notorious illness-causing bacteria, like Salmonella, E. coli, and Listeria. He also discovered that combining UV light and bacteriophages to meat reduces the presence of bacteria even further.

He is now investigating how microRNA (the molecules responsible for the expression of genes that can become abnormally regulated and lead to human diseases such as cancer) is expressed in beef. His studies seek to reveal how microRNA affects human health when beef is consumed, and could ultimately translate to better nutritional values for the meat people eat.

Both of these innovations have implications for improving food safety, nutritional values and food security. He says, "All the research we're doing here is applicable to the industry. Our faculty goal is to become a reference in research in the West, not only in meat science but also in other animal science areas."

Preparing students for the workplace

De Mello's experiences enable him to share a unique perspective with students. He presents them with scenarios they might not typically encounter in college classes because of his experiences working at the food processing plant.

"I want to teach my students things I didn't have the opportunity to learn when I was in college, says de Mello. "I've learned from real-world situations and I want my students to know how to use methodologies to solve issues in the workplace."

"I was surprised by the scope of the work, being an undergrad. He has very high expectations for his students," says Cavender, who has recently been working on a project comparing the qualities of wet-aged versus dry-aged beef, a responsibility de Mello entrusted her with after she had worked many volunteer hours in his lab.

De Mello's commitment to science advancement is clear. He says, "This is what I love to do. There's nowhere else that I'm as comfortable as I am in my lab. We're developing important research for the betterment of the meat industry."