Evolution of a Burning Man village - a father and daughter's adventure

University Libraries Burning Inquiry event scheduled for Thursday, May 3, at 6 p.m. inside the Wells Fargo Auditorium located on the first floor of the Mathewson-IGT Knowledge Center at the University of Nevada, Reno.

Evolution of a Burning Man village - a father and daughter's adventure

University Libraries Burning Inquiry event scheduled for Thursday, May 3, at 6 p.m. inside the Wells Fargo Auditorium located on the first floor of the Mathewson-IGT Knowledge Center at the University of Nevada, Reno.

The relationship between a father and daughter can be challenging, complex, meaningful, inspirational and everything in between. For Dan Adams and his daughter Aimee Adams Frugoli their relationship deepened at Burning Man of all places. Dan, one of the founding members of the iconic Martini Village theme camp at Burning Man, and Aimee have embraced the uniqueness of their father-daughter relationship to help create one of Burning Man's most popular and fun theme camps. Martini Village offers the finest cold cocktails and entertainment, as well great company. Dan and Aimee reside in Reno, Nev. and play key roles in the group that organizes the camp. 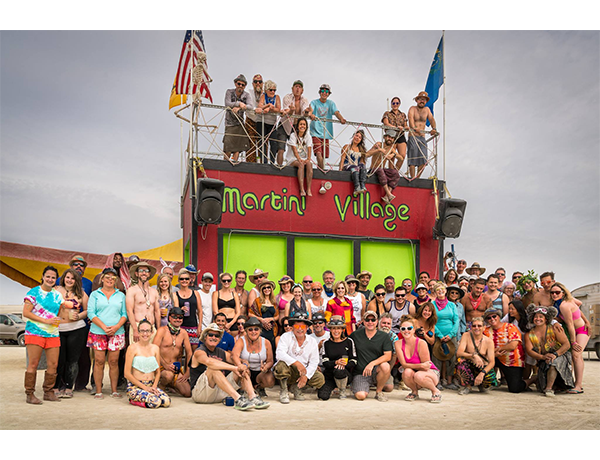 Both Dan and Aimee will share the Martini Village story as part of University Libraries Burning Inquiry event on Thursday, May 3, at 6 p.m. inside the Wells Fargo Auditorium located on the first floor of the Mathewson-IGT Knowledge Center at the University of Nevada, Reno. Please visit Eventbrite to RSVP for the event.

Dan attended Burning Man for the first time in 1999 mostly against his will. He said he had already experienced the hippy love-in thing and that he had done it for real and didn't need to experience a reincarnation. His wife Kathi brought him to the playa based solely on her interest in attending. As he reminisced about his first trip to the playa he vividly recalled not being that excited to attend.

"We arrived to Burning Man late in the week and pitched our tent in the dark, Dan said. "I was grumpy and went to bed while Kathi took off and didn't return until the wee hours of the next morning. When she shared with me what she saw and experienced overnight, I thought she was kidding, but it only took 10 minutes out of camp to realize I was 'not in Kansas anymore' and I was going to be experiencing something entirely new."

2018 will mark 20 consecutive years attending Burning Man for both Dan and Kathi and 17 for Aimee.

"If it weren't for Kathi, there would be no Martini Village," Dan said. "Martini Village formed accidentally as groups of our friends and their friends started camping on the playa in the same location within Black Rock City year after year."

Dan hooked up with Steve Zydeck, whom he worked with, and after sharing pictures of her adventures at work, Kathi got her colleague, Jarl Nielsen, interested in the event. These folks created the core of what would become Martini Village.

Aimee Adams: Lover of fun deepens bond with her father at Burning Man

Aimee first attended Burning Man in 2001. Her first Burn was with her cousins, they borrowed her dads car, loaded-up, hooked-up bikes and headed into the unknown. She continued to camp with cousins and friends at separate camps from her dad for her first three Burns. Over time she came to realize that her dad's camp had better shelter and shade, and a solid community of individuals who were a lot of fun. In 2004, she decided everyone should move into the same camp and multiply the fun.

After successfully having her friends and cousins join forces with her dad she realized something very special. Basic parent and child relationships dictate that kids at first don't typically want to camp with their parents at Burning Man, for Dan and Aimee this was the case as well. 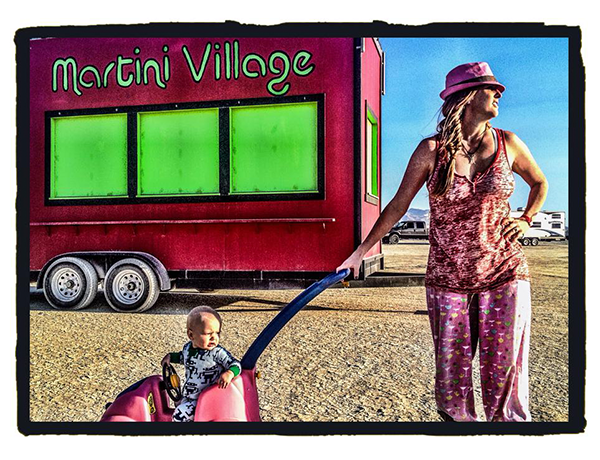 "The main perk of deciding to combine camps with my dad was learning that our relationship was no longer just parent-child, but adult to adult," Aimee said. "Now that's a pretty cool place to be. I love sharing all these memories and experiences with my dad and step-mom!"

Aimee now attends with not only her dad and step mom, but husband and two kids as well as numerous other family members.

As the core of family and friends grew, larger sections of land were necessary to accommodate everyone. Aimee started going out to the playa earlier than everyone else and securing the space. Dan was always concerned that everyone fit into the space and would figure out how to park everyone and set up tents, etc.

In 2004 the Burning Man theme was "Vault of Heaven." The core members, "the burning family," knew they wanted a camp name to connect and identify with, as well as reinforce the overall annual event theme. As a result, one of their burning family members, Karen O'Brien, came up with "Heavenly Martini" as that year's camp name.

"Heavenly Martini is the camp that ultimately led to what is today's Martini Village," Aimee said.

From Heavenly Martini to Martini Village

In 2006 the group applied for and received official Burning Man theme camp status. The theme for that year was "Hope and Fear" and they became known as "Fear No Martini."

In 2008 the group had become so large that the core members decided to apply to become a village. Becoming a village allowed them to have several theme camps within the village which divided up the work and allowed them the same name year-to-year that folks could recognize and find.

Evolution of the Village

Martini Village continued to grow in size and notoriety. In 2009 there were approximately 225 campers in Martini Village, by 2011 that number had grown to over 300.

"We noticed that small pods of camps were developing within the village and things were becoming very chaotic and difficult to manage effectively and safely," Dan and Aimee said. "It was then we knew we had to make some necessary adjustments to our camp." 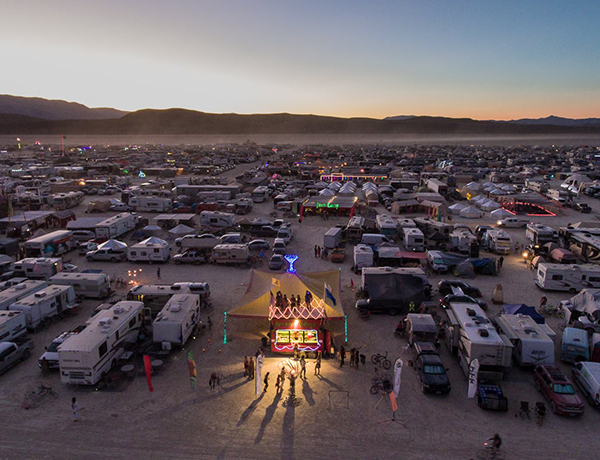 In 2011, after the event, Dan and Aimee, along with the core members of the village, realized that the Village had grown beyond what was intended and they took the necessary steps to scale back and return Martini Village to its original roots.

"It was the moments we would meet someone and they would tell us they were a part of Martini Village and we didn't know them and they didn't know us," Aimee said. "We were losing that family bond of the Village and it wasn't what we wanted."

It also became apparent to Dan and Aimee that imposing rules and regulations were necessary within Martini Village.

"When you grow and become bigger, you need regulations to protect the masses," Dan said. "This is what we had to do in order to maintain the integrity of Martini Village. It's also what the Burning Man organization has had to do to maintain the events integrity to the community of Burners."

In 2017, the village had about 125 campers, which is very close to being the optimal size of the Village.

For Dan and Aimee family is twofold. There's the blood family and the playa dust family, both as important and meaningful as the other in their own ways.

"Burning Man is a true family affair for me," Aimee said. "I attend with my own family (husband, daughter, six, and son, four), my dad and Kathi, and my younger brother."

All of the family members are highly involved with Martini Village, and Dan...well, he is the unofficial Mayor. He draws the village map with his obsession being fitting everyone into the Village. Aimee completes the application, runs and manages the core group and communicates with the Burning Man Organization.

It's important to note that running a village, takes a village. Dan and Aimee noted the core group of Martini Village is what makes it a success year after year.

Aimee also said that her children are presented with opportunities to learn, grow and explore that are not available in the "default world."

"The kids get to make and experience incredible art, bang and climb on things, learn about Matter out of Place (MOOP) and leave no trace principles, they also have developed a deep love for Mother Nature as a result of attending," she said. 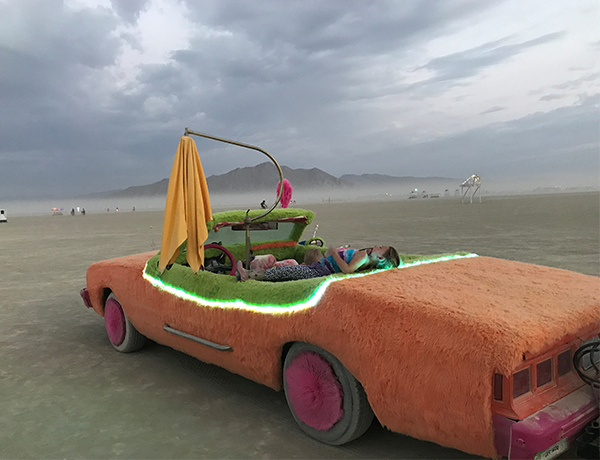 Aurora Frugoli, Aimee's daughter, takes in the sights and sounds of Burning Man from an art car on the playa

Because family is so important to Dan and Aimee, they encourage the kids to get involved in the community. For the past two years Aimee's daughter Aurora has planned her own party.

"Imagine yourself at a kids princess party with nail and face painting, doing hair, blasting Disney music, and bubbles," Aimee said. "That's a pretty epic way for a child to experience Burning Man. I am so happy my kids enjoy the event as much as my dad and I!"

Both Dan and Aimee expressed deep gratitude for family-friendships that have evolved out of Burning Man. Aimee met who would be the Man of Honor at her wedding through her dad's camp on the playa. Dan and Kathi have traveled to both Guatemala and Tanzania because of friendships formed at Burning Man.

"Our Burning Man family spans generations," Dan said. "These relationships have grown across a close group of other families and have afforded me a lifetime of adventure, unforgettable holiday celebrations and many worthwhile and deeply personal relationships. All because there are people out there who enjoy spending time in the Nevada desert drinking cold libations."

Martini Village 2018 and beyond

In reflecting on the significance and impact Martini Village has had on Burning Man and all of the campers it has hosted Dan said, "So much of everything with Martini Village was random and accidental. Things seemed to just fall into place. I have to say thanks to Kathi. Had she not dragged me to the playa and encouraged me to dive in head first many moons ago Martini Village would have never taken shape."

Both Dan and Aimee often get asked why they choose to organize and manage one of the coolest camps on the Playa.

"We do this because we love it," Aimee said. "These people are our family and they mean so much to us. We want to keep Martini Village true to its roots while maintaining our passion for cold libations, awesome entertainment and fun for all."