Mehdi Saiidi, civil engineering professor and leader of the project, is also an award-winning researcher in 2018. 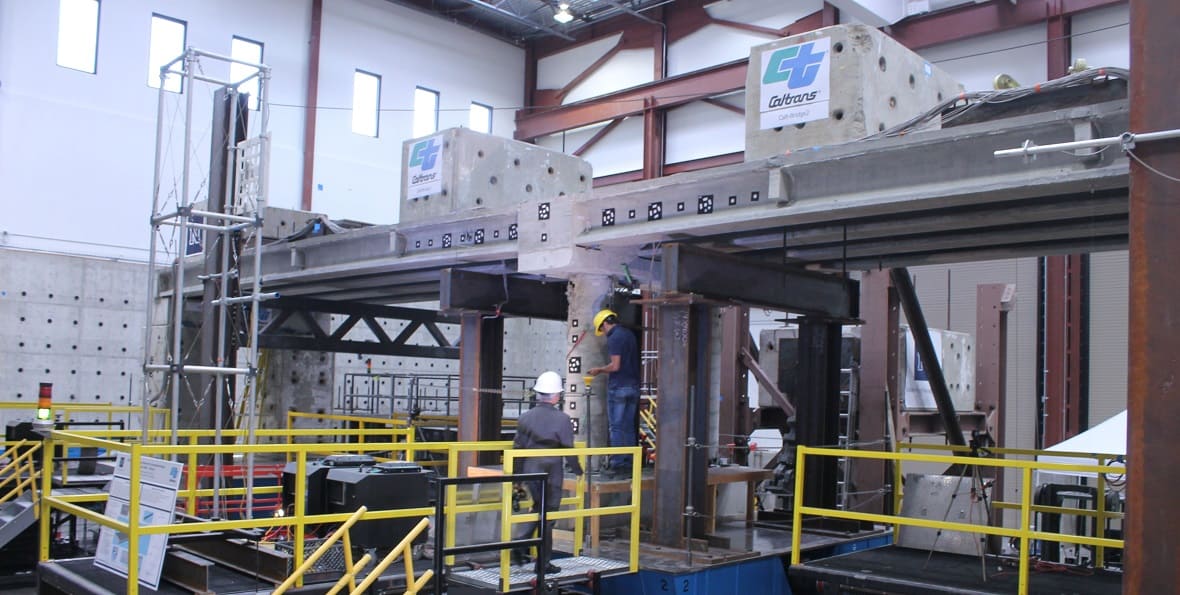 Mehdi Saiidi, civil engineering professor and leader of the project, is also an award-winning researcher in 2018.

Saiidi, a civil engineering professor in the College of Engineering, has had partnerships with the California Department of Transportation for many years to conduct research - including the current project - that will enable the department to implement new bridge designs. The bridges must be quick to construct, stand up to big earthquakes and suffer only minimal damage that can be repaired easily.

The process is known as accelerated bridge construction, or ABC. The mission of ABC is to develop earthquake-resistant precast bridge components and systems while transforming research data into seismic design guidelines. The components can be built off-site, brought to the construction site and installed, reducing repair time. The research also helps expand the utilization of ABC in moderate and high-risk seismic zones.

The current research project, a 70-foot-long, two-span model used six ABC connection types in a single bridge system and was tested with strong simulated earthquakes using the bi-axial shake table system at the University's world-renowned Earthquake Engineering Lab. Components for the bridge were built on- and off-site, brought into lab and reassembled on top of the three huge shake tables.

"ABC is important to the traveling public," Saiidi said. "It allows for shorter construction times and also improves the project so the public can get on to traveling and leads to less congestion."

Saiid, who is now semi-retired, has also received millions of dollars in research grants from the National Science Foundation. He has recently published more than 15 articles in periodicals such as the Journal of Engineering Structures and the International Journal of Bridge Engineering.

"The research on Accelerated Bridge Construction has been gaining momentum in the last few years," Ahmad Itani, co-principal investigator and chair of the Civil and Environmental Engineering department, said. "This type of construction will be very crucial for the resilience of communities after extreme events such as earthquakes, floods and tsunamis. Professor Saiidi has been one of the pioneers of ABC research that can be used in seismic zones. His work has been implemented on several bridges that are located in high seismic zones in Nevada, California and Washington. Research that improves the resilience and suitability of communities is one of the major thrust areas of the Civil and Environmental Engineering Department in fulfilling the University's mission as a land-grant institution."

Researchers today are ready for more resilient bridge developing guidelines, and are looking at using new materials to pave the way for these implementations to happen across the country. Saiidi has pioneered research in this area over his career. The objective of Saiidi's test last week is to determine the performance of the 22 precast deck panels joined together using traverse joints.

Graduate researcher Jared Jones, who works under Saiidi, was involved with the construction, design and implementation of the bridge.

"The bridge performed as expected. No collapse usually means it's successful," Jones said. "All of the components remained damage free. We overdesign the columns so they take damage. They're cheaper than the span."

What happens during a seismic test at the University's Earthquake Lab?

The design, a 100-ton, 70-foot-long concrete bridge was shaken in a simulated earthquake using recordings of the large ground motions of the deadly 1994 Northridge, California, earthquake. The bridge prototype is similar to bridge systems in regions of moderate to high earthquake seismicity, like Los Angeles, California. The design concepts involved are integrated into one bridge to find out if these connections can resist earthquakes when combined. These connections were developed by Saiidi and others and have been individually tested beforehand.

"Many of the bridge parts were prefabricated in a factory in Northern California, and the columns are all built separately," Saiidi said.

Saiidi and his team are the 2018 winners of the Precast/Prestressed Concrete Institute's Robert J. Lyman Award. Their paper "Precast concrete spliced-girder bridge in Washington State using superelastic materials in bridge columns to improve seismic resiliency: From research to practice" was published in the January/February 2018 issue of the PCI Journal. The innovative column designs used in the the Washington project are the direct result of Saiidi's research at the Earthquake Engineering Lab, and one of the first to be used in real world applications.

The award will be presented Oct. 12 at the 2018 PCI Fall Committee Days and Membership Conference in Rosemont, Illinois.