Why and how do we sleep?

Associate Professor Alexander M. van der Linden explains the need for sleep, and how simple organisms with a completely mapped nervous system are key in understanding sleep regulation and function.

Why and how do we sleep?

Associate Professor Alexander M. van der Linden explains the need for sleep, and how simple organisms with a completely mapped nervous system are key in understanding sleep regulation and function.

Humans spend a third of their life sleeping (if you're lucky). We think of sleep as a restorative process for our brain, in which we consolidate memories, clean our brain from toxic products, and prepare for a new day. When sleep is abnormal or disturbed, it can have a direct impact on our physical and mental health. Sleep disorders and a host of sleep-associated diseases; such as an increased prevalence of obesity, can be found in a large proportion of the US population. Despite the need for sleep, the core function of sleep and its interactions with other organs and bodily systems remains a long-standing mystery.

The complexity of the human and mammalian brain makes it difficult to investigate the mechanisms, i.e. brain circuits, neurons, genes and the properties of sleep. Although there are challenges of defining "sleep", and some features of sleep have likely changed during evolution, a closer look at simple organisms such as nematodes, fruit flies and even jellyfish, who have simplified "brains" and who display similarities to human and mammalian sleep, could unravel the basic mechanisms underlying sleep function and regulation, but also provide possibilities to improve the diagnosis and treatment of people with sleep disturbances.

The nematode Caenorhabditis elegans, in particular, with its relatively small, stereotypic and completely mapped nervous system of only 302 neurons, is allowing sleep researchers, such as myself, to study the core mechanisms of sleep function and regulation in an uncomplicated organism with a wide variety of available tools in the lab - from identifying new genes and signaling molecules responsible for sleep behavior; using sophisticated genetic and molecular approaches, to linking single neurons and their circuits to sleep states with optogenetics. 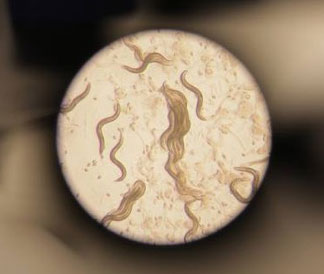 Image of a population of Caenorhabditis elegans taken through a stereomicroscope.

What sleep researchers have learned so far is that fish, flies and even nematodes appear to fulfill the most fundamental criteria of sleep. These animals also have the capability to coordinate sleep behavior using simple nervous systems and provide rapid progress and important insights into the basic sleep process from a genetics and neurochemistry perspective. Studies with these simple organisms revealed that sleep is not controlled by a single gene or neurotransmitter, but that sleep is likely an organism-wide phenomenon involving a multitude of components. Of note, while simple organisms can lead to new gene discoveries in sleep function, the genetics of sleep is not restricted to these models as linkage analysis and genome-wide association studies in humans have pinpointed new sleep genes as well. Lastly, work from these simple organisms that are low on the evolutionary ladder compared to humans and mammals also implies that the ability of sleep evolved quite early.

The big question "Why we sleep?" remains a long-standing question in sleep research. There are several proposed hypotheses for sleep functions, each with strong evidence, including brain energetics and restoration, brain-specific functions such as synaptic plasticity i.e. memory consolidation, and down-scaling of synapses, biosynthesis of key cellular components to prepare for subsequent wakefulness, and allocation of energetic resources. Simple model organisms and the advancement of new tools to interrogate brain functions will likely allow us to more directly examine these hypotheses, and provide significant insights into why we sleep. 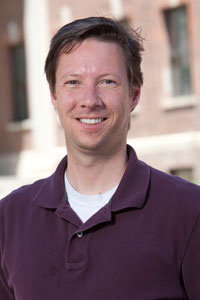 Alexander M. van der Linden, Ph.D, is an Associate Professor in the Department of Biology at the University of Nevada, Reno. He is also a co-director of the Integrative Neuroscience Graduate Program. His research investigates the role of sleep, and its connections to metabolism.