HIL Applied Medical is an emerging leader in the development of high-performance proton therapy systems for the treatment of cancer. The University's Nevada Terawatt Facility is one of the National Nuclear Security Administration's Science Centers, home to the largest university laser and pulsed-power accelerator combination in the United States and part of the College of Science. 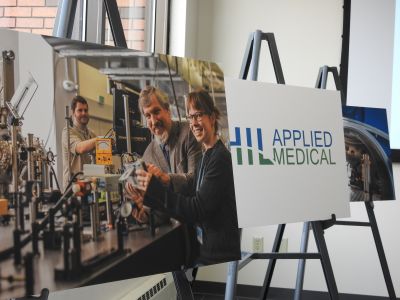 Posters on display at the August 4, 2017, Innevation Center event acknowledging the collaboration.

Proton therapy is a targeted radiation treatment for cancer tumors, and the precise nature of proton therapy minimizes side effects and damage to surrounding healthy tissue. Through research conducted at the University's Nevada Terawatt Facility, HIL Applied Medical will work to advance new technologies to deliver proton therapy through equipment that is smaller, more effective and less expensive. This, predicts HIL CEO Sagi Brink-Danan, will make the therapy more widely available to patients across the country and around the world.

"There are hundreds of thousands of patients who can benefit from this therapy. Fewer than 5 percent around the world have access to it, and we want to change this," Brink-Danan said.

The entire, collaborative opportunity began with a faculty startup business.

During his time as an assistant professor of nanotechnology at the University of Nevada, Reno, Jesse Adams co-founded NanoLabz, and some of the technologies developed through this faculty startup at the Nevada Terawatt Facility were licensed through the University. HIL Applied Medical acquired NanoLabz and these technologies in 2016, and Adams continues with HIL Applied Medical as vice president in their Reno office.

From the vantage of Aaron Covington, director of the Nevada Terawatt Facility and faculty member in the College of Science's Department of Physics, the participating organizations complement each other. HIL Applied Medical and the University share mutual, scientific interests, he says, and the collaboration brings together expertise in physics, highly specialized equipment and the opportunity to test real-world applications.

"We have been activating isotopes for medical imaging as part of our research portfolio," Covington said. "We've been working very hard to bring our research expertise and equipment into play with applied physics, with problems such as those within the world of medicine."

The Nevada Terawatt Facility's array of equipment includes a number of high-power laser systems. These systems are used to conduct a large amount and variety of contract work, both public and private, and ranging from the fields of defense and security, to medicine and energy.

Now, an investment by HIL Applied Medical will support the facility's "Cheetah Laser," which was previously purchased by the University but not yet fully commissioned.

"Lasers need to be commissioned and calibrated, often at the cost of several hundred thousand dollars," Ellen Purpus, the University's assistant vice president for enterprise and innovation who oversaw development of the agreement with HIL, said. "HIL is funding this, and their investment will support maintenance and safety." 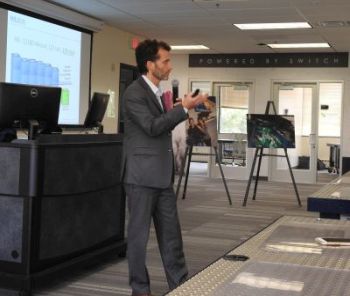 "This collaboration is a major milestone along our technology development path," Brink-Danan said. "It brings together the equipment and technical expertise that exist at the NTF, and the best capabilities of HIL's Israeli scientific team, to hopefully accelerate our R&D work towards commercialization."

"This collaboration is a major milestone path," Brink-Danan said. "It brings together the equipment that exists and the best capabilities of the very high quality NTF team."