Digital Scent comes to the Internet of Things

With University-licensed technology and $18 million in new investor funding, NevadaNano is poised to disrupt the market

Digital Scent comes to the Internet of Things

With University-licensed technology and $18 million in new investor funding, NevadaNano is poised to disrupt the market

The use of digital technologies to analyze odors represents an exciting frontier that is being advanced by NevadaNano, an advanced manufacturing business based in Sparks, hiring University of Nevada, Reno graduates and leveraging discoveries licensed through the University.

NevadaNano has developed what the company calls Digital Scent: advanced gas sensors that detect and accurately identify hazards such as explosive, toxic or carcinogenic gases and deliver measurements through the cloud. NevadaNano's Molecular Property SpectrometerTM solution integrates an array of chemical sensors on a single silicon chip and brings gas sensing to the Internet of Things.

An infusion of $18 million in Series B investor funding, announced Oct. 30, supports NevadaNano's continuing development and market launch of the next generation of sensors that can be distributed in homes, offices and outdoors to monitor exposure to hazardous gases and enable people to take action to protect health. These newest sensors continue to leverage the University-developed technology, and can detect trace levels of gases at a lower price point and with high levels of performance. 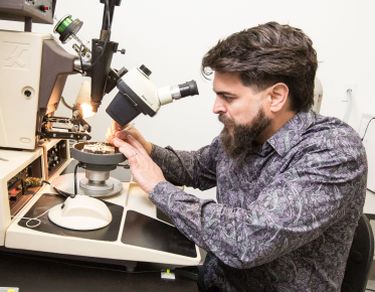 There since the beginning: Steven Malekes, the first grad student to work on the technology as it was developed through the University, earned his master’s in mechanical engineering in 2001 and joined NevadaNano at the company’s launch in 2004.

"The extensive intellectual property portfolio we share with the University of Nevada, Reno has provided a strong base for NevadaNano to build our disruptive Molecular Property Spectrometer gas sensing solution," said Ralph Whitten, president of NevadaNano. "In addition, being able to recruit excellent UNR science and technology graduates and consult leading researchers has been instrumental in achieving our vision of bringing Digital Scent to the Internet."

Jesse Adams, NevadaNano co-founder and current technical advisor, led the University-based research that resulted in the licensed technologies. While an assistant professor at the University, Adams developed a self-sensing microcantilever platform for explosives detection, chemical-vapor detection and water-quality sensing.

Launched in 2004, NevadaNano was one of the first startups to grow out of the University, said Ellen Purpus, University assistant vice president of enterprise and commercialization. "They have brought a startup to fruition and further to maturity and success," she said.

"Seeing a faculty-developed and research-based technology move into the market and have a role in the creation of high-tech jobs is very rewarding. In the case of NevadaNano, this is all happening in northern Nevada and many of their employees are alumni of the University," said Mridul Gautam, vice president for research and innovation at the University. "The NevadaNano story is a strong example of how the University is having not only regional impact, but national and global impact as well."

(Note: NevadaNano contributed to this story.)

Dean Easton-Brooks: my voice, my citizenship

Into Nature: The History Of Camping in the Far West

Award-winning musician Martha Redbone to perform at the University