Basque Library exhibit honors history of the bombing of Gernika

“Gernika: Voices After the Bombs” on display until October 2017

Basque Library exhibit honors history of the bombing of Gernika

“Gernika: Voices After the Bombs” on display until October 2017

The exhibit, "Gernika: Voices after the bombs" emphasizes how planes became war guns and connects the 80th anniversary of the bombing of Gernika to what's happening around the world today.

The bombing of cities and civilians during wartime has been a constant of history even before planes became war guns. On April 26, 1937, Gernika, the sacred city of Basque People, was destroyed and more than 2,000 people were killed by the action of the Nazi Luftwaffe and the Italian Air Force, acting under Francisco Franco's command.

The bombing of Gernika was one of the first actions of the Condor Legion, a real-life training for the Nazi's Blitzkrieg. The methods developed by this unit served as a model for the bombings by the Luftwaffe during the Second World War.

Eighty years after this event, the voices of those who witnessed the destruction of Gernika should remind us that suffering is real, and children die under these horrific bombs. Even today, in recent times, we continue to see images of screaming and crying people on social media and television. These bombings continue to impact the lives of people around the world. 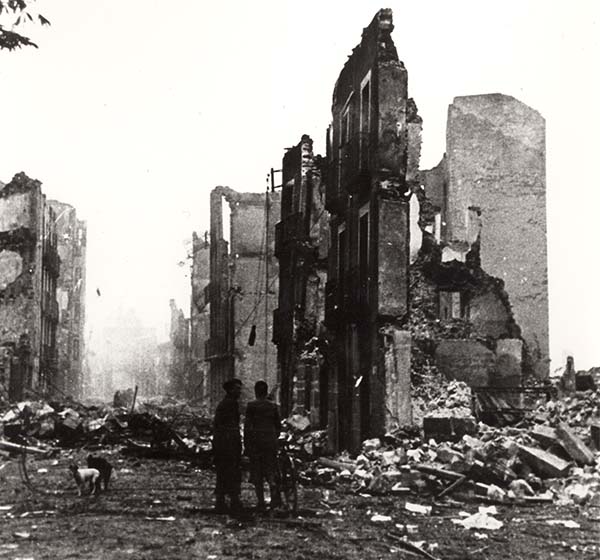 Street in the Basque city of Gernika after the 1937 bombing

The exhibit showcases photographs and first-hand testimonials from survivors.

Exhibit Coordinator and Basque Librarian Iñaki Arrieta Baro said curating this exhibit was a must.

"The 80th anniversary of the bombing of Gernika served as an opportunity to raise awareness related to what happened there and helps tell a story of why this historical event matters today."

Xabier Irujo, director of the Center for Basque Studies at the University of Nevada, Reno helped develop the exhibit. He is an expert on Basque history, and author of "Gernika 1937: The Market Day Massacre."

"We reviewed materials in the Basque Library archive and discovered a wealth of information published by the Basque government and journalists during the war," Irujo said. "As a result of having access to these materials and with the publication of my book, we decided to show what happened to the people of Gernika and wanted to demonstrate how folks suffered from the bombing and how they lived during this time and in the days after."

Exhibit visitors have an opportunity to read and hear survivor testimonials.

"Our goal was to transmit the Gernika experience to visitors," Arrieta said. "We translated testimonials to English and recorded them to give a voice to the survivors. Images and video alone didn't convey the severity of what happened. This is what lead to the title of the exhibit."

"This war experiment at Gernika measured how effectively, how quickly and at what economic cost a city could be erased from the map, Irujo said. "It was learned that bombing from the air is fast, effective and cheap. It's the quickest way to win a war. World War II ended with the dropping of the atomic bomb and today the logic is the same except we have more powerful and more effective bombs."

The exhibit connects with visitors on an emotional level.

Irujo said, "If we study in-depth how people suffered and the ways the victims died we can begin to understand the impact of these types of bombings. When we feel something we really learn it. If we don't feel it, somehow our brain catalogues the information, but it has little effect on our behavior." 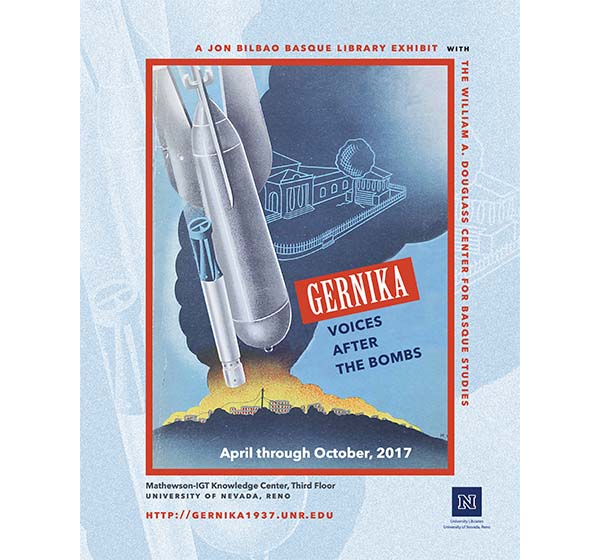 Gernika: Voices After the Bombs is on display until October 2017 outside of the Jon Bilbao Basque Library on the third floor of the Mathewson-IGT Knowledge Center at the University of Nevada, Reno. Access to the Basque Library is available via the elevator next to Bytes Café or from the north end of the building.

The exhibit was produced in conjunction with the William A. Douglass Center for Basque Studies. Testimonials by (originally gathered by William Smallwood) Iñaki Rezabal, Mercedes Irala, Sabin Apraiz, and Francisca Arriaga. Testimonials translated by Irati Urkitza Ansoleaga and Edurne Arostegui.

For more information on this exhibit visit the Jon Bilbao Basque Library website.

The Jon Bilbao Basque Library is a part of University Libraries at the University of Nevada, Reno. University Libraries embrace intellectual inquiry and innovation, nurture the production of new knowledge, and foster excellence in learning, teaching and research through scholarly resources, creative learning spaces, cutting-edge technology, and world-class service.